Leadership, life lessons from another continent

When he saw how broken the basketball court floor was, Jeff Barringer’s ideas about the players changed. Here he was in Nairobi, Kenya, on the campus of Strathmore University, surrounded by student-athletes whose talents qualified them to compete at the professional level. The teams win so many trophies that they have a storage problem, yet their athletic facilities are dismal. 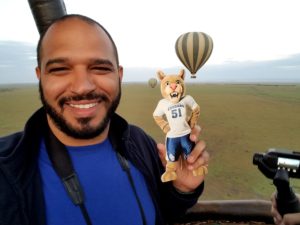 Jeff Barringer, assistant director for recruitment in the Columbia College Admissions office, spent 10 days in Kenya as part of a Leadercast Expedition in October.
(Photo submitted by Jeff Barringer)

“Not only were these student teams playing at the professional level, they were winning,” says Barringer, a 2012 and 2017 graduate of Columbia College. “But when I looked at their campus, the basketball court was uneven and outdoors, the track was gravel, and runoff from a nearby hospital collected in the middle of their field. Everything they had was what we would consider to be an excuse to not be successful.”

Now, back in Columbia, Missouri, Barringer is taking these examples from the Leadercast Expedition trip to heart. Barringer, Columbia College’s assistant director for recruitment in the Admissions office, never thought he’d end up going, but his wife Amber, executive assistant for the senior vice president and chief operating officer at the school, had other plans.

“A bunch of people from Columbia College went to Leadercast this year, and my wife and I were there. They had a little flyer for the trip in their program, and I kind of reached over like, ‘Oh, that’s cool,’ and didn’t think anything else of it,” says Barringer. “Well, she decided to contact the company and get an interview set up for me. So, she kind of got the ball rolling. I did the interview with Duane (Cummings), the CEO, and he picked 16 people out of all the people he interviewed. I was one of the ones selected for it. Kind of cool.”

The 10-day trip included a safari, interactions with local Maasai tribe leaders and visits with the players of Mathare United, a professional soccer team made of athletes who live in Mathare, the second-largest slum in Africa. Their success despite challenges inspired Barringer, and he found even more to admire when he interacted with soccer athletes during a practice.

“One of the Mathare players and I connected really well,” says Barringer, pointing out the Mathare United bracelet on his wrist. “After we met, he wanted to talk more, so he walked all the way to our hotel and brought me a gift. I was humbled that someone just barely getting by would make that gesture, and I hope I can have that same impact on the people I serve.”

The idea of leadership as service is a core idea that Cummings taught Barringer, along with the ABCs of leadership: awareness, behavior and communication. Barringer is actively working on increasing his awareness of the needs of his new team.

“I kind of feel like leadership is one of those things that, if you’re not continually trying to get better, you won’t get any better at it,” says Barringer. “I’m trying to pay attention to each member of my team’s communication needs. The hardest part is to be intentional, because it’s really easy to focus on the conversation and not all the other cues.”

Barringer keeps the gifts from the Mathare player, a small bowl and a carved wooden elephant, with him in his office so he can remember the inspiration he found in the determined athletes.

A few floors up from Barringer’s office is the desk of Amanda Iman, a creative strategist in Columbia College’s Marketing department. The background of her desktop computer, surrounded by design magazines and books full of paper samples, often features photographs of Maasai singers in their traditional bright red, royal blue and deep purple clothes. She volunteers her graphic design and marketing know-how to a Tanzanian media production company, Pamoja Ministries, and is spending two weeks this December near where Barringer travelled in Africa. 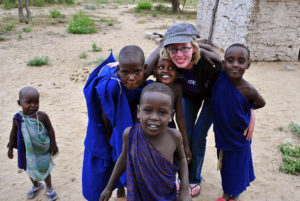 Amanda Iman, a creative strategist in the Columbia College Marketing department, has volunteered in Tanzania and is traveling to the country again in December.
(Photo submitted by Amanda Iman)

“I volunteered with Pamoja and first traveled to Tanzania in 2010, worked on projects and helped launch the organization’s production company,” said Iman. “In working with Pamoja, both while in Tanzania or back home in the States, I’ve helped rebrand their organization, do PR for the world premiere of their movie, designed CD and DVD covers for children’s programming and Maasai music and even helped coordinate additional Maasai choir tours across North America.”

Iman, like Barringer, has found inspiration from her work and travels.

“One of my favorite things about this trip and working with this organization is that I can use the skills that I already have to be a part in showcasing a different side of a continent than is rarely seen in Western media,” said Iman. “There is such diversity, beauty and so many stories of hope that just need a little help getting their voices heard.”