Diane Davis says she’s not very good with names. You can’t blame her, really. She’s had to learn a ton of them during her 30-year career with Columbia College, during which she has served as an Administrative Assistant, Office Manager and Academic Advisor at the Orlando location. 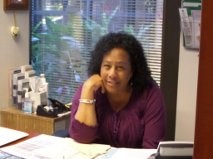 She does know the faces, though, of the students and staff members she’s had the pleasure of working with over the years. And the voices. And, especially, the stories.

“We’re not like a big college. We get to know our students,” Davis said. “Some of them have issues, sometimes, that they feel comfortable talking about. I would sit and talk with them, almost like a mother figure.”

The students show their appreciation by stopping by the office to say hello. Or to bring a cake for Davis. Or, in the case of one student who owns a gyro/submarine sandwich shop, to bring her hot wings.

“I’ll tell her, ‘No wonder I’m gaining weight!’” Davis said, with a laugh.

Davis is leaving Columbia College-Orlando on Dec. 29, for a retirement filled with gardening, bowling, reading, cheering on her husband, Robert, during his softball games and spending time with her three sons and three grandchildren.

She’s looking forward to the next phase of her life, but she will also miss the one she’s leaving behind.

“What I’ll miss most about Columbia are the students. I’ll miss the staff, especially the other Academic Advisors, because we’ve become close,” Davis said. “We can connect with each other. I’m going to miss that part. It’s going to be a whole new ballgame when I leave here.”

Dennis Wagner, the first director at Columbia College-Orlando, hired Davis as an Administrative Assistant in 1984. Before then, Davis had been raising her children and moving around frequently with her first husband, following his military career.

Once her family settled in Orlando, Davis went to work with the college at the Orlando Naval Training Center in December 1984. For about the first six months on the job, Mr. Wagner allowed Davis to bring her youngest son, who was 3 at the time, in to work with her until he was old enough to go to preschool.

“There was an extra room right behind my desk. He played in there,” Davis said. “He was no trouble. That was nice. Not many jobs would do that.”

Davis earned her Associate degree from Columbia College in 1987, then earned a Bachelor of General Studies with a minor in Psychology in 2004, which earned her a promotion to Office Manager.

In 2006, she left the college for a job with Orange County Public Schools. Three years later, then-director Dr. Alan Hilliard hired her back.

Columbia College-Orlando has gone through a multitude of changes since Davis started there. But she says one thing is still the same from the first day she walked into her office on the naval base.

“I enjoyed Columbia College because of the family atmosphere within the office and with the students,” Davis said. “My thing was the students are not just a number, but a part of who I am.”

She has been an integral part of their lives as well.