Ron Stallworth sat in a Brooklyn studio in October, watching a table full of actors re-enact a pivotal period of his life that happened nearly 40 years ago. 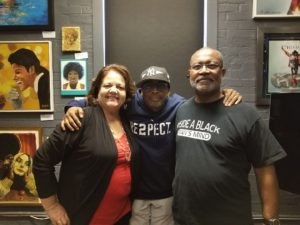 Ron Stallworth and his wife, Patsy, with Oscar-winning director Spike Lee, who will be bringing Stallworth’s autobiographical book Black Klansman to the big screen.
(Photo submitted)

John David Washington, son of Academy Award winner Denzel Washington, was there, playing the part of “Ron Stallworth.” So was Laura Harrier, whose latest credits include Spider-Man: Homecoming, and Adam Driver, who plays the main villain in the current Star Wars trilogy of movies.

Presiding over it all: Oscar-winning director Spike Lee. His next project, Black Klansman, is based on a nonfiction book by the same name that Stallworth authored. This was the first table read with the cast.

“We looked at each other, smiled and said, ‘Can you believe this?’” Stallworth said. “That’s my name they’re mentioning. We’ll be able to see it in a dark theater with popcorn and Coke and actually watch all this take place. It’s very surreal. We periodically look at each other, pinch ourselves and say, ‘Can you believe this?’ Because it’s a rollercoaster ride that we’re on, one that we never imagined.”

The film’s distributors are targeting a release date of November or December 2018. They want to get it into theaters before Jan. 1, to make it eligible for the 2019 award-show cycle.

Stallworth, who spent more than three decades in law enforcement, earned his Bachelor of Arts in Criminal Justice from Columbia College-Salt Lake in 2007. He published Black Klansman in 2014, because he felt it was an important chapter of his life to share.

It tells the story of how, as a Colorado Springs Police Department detective in 1978, Stallworth ran an eight-month undercover sting operation in which he embedded himself deep within the fabric of the Colorado Springs chapter of the Ku Klux Klan hate group. Along the way, he helped thwart criminal acts the chapter had planned, gained critical intelligence about the national KKK apparatus and how it intersected with other extremist groups and rose to a leadership position within his local chapter.

Stallworth conducted his portion of the operation over the phone and through correspondence. When a meet-up was required, he sent a white friend who worked in narcotics to be “Ron Stallworth.”

“The insight I got is that they’re not the brightest lightbulbs in the socket,” Stallworth said. “They’re relatively ignorant people in the sense that, if they had been on their game, I never would have been able to accomplish what I did accomplish.”

While it was primarily an intelligence-gathering operation, Stallworth and the Colorado Springs Police Department were able to stop three planned cross burnings during the course of the sting. Chapter members would loop Stallworth in on the plans, he’d call police dispatch, and patrols would flood the area. 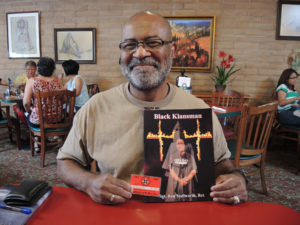 Ron Stallworth with a copy of his book, Black Klansman, and his Ku Klux Klan membership card. (Photo submitted)

“Once they would get in the area to plant their cross and see all these police cars cruising back and forth, they would panic and chicken out,” Stallworth said.

Stallworth also caught wind of a plot to bomb two gay bars in the area as well as a plan to steal automatic weapons from a nearby Army base, Fort Carson, during the life of the sting. Neither of those crimes ever happened. Through his conversations with group leaders, Stallworth was able to help connect the dots between the local Klan chapter and an American Nazi Party group out of Denver, as well as the militant Posse Comitatus organization.

He had multiple conversations with David Duke, then Grand Wizard of the KKK, in which the Anti-Defamation League would feed Stallworth questions to mine Duke for information.

All the while, Duke was certain he was speaking with a like-minded white man.

“He would answer my questions, not recognizing that he was basically snitching on himself,” Stallworth said. “Then I would pass that information back to the Anti-Defamation League for whatever purpose they had in mind, closing a few gaps in their understanding of what was happening at the time.”

A major motion picture studio bought the rights to Black Klansman soon after it was published in 2014, but it let the contract expire without moving on it. At one point, Emmy Award-winning screenwriter Christopher Cleveland expressed interest in bringing the story to the screen, but that fell through as well.

“He told me, ‘Don’t give up. This is a blockbuster in the making, if it’s done right. And the story should be told,’” Stallworth said.

QC Entertainment bought the film rights in March 2016. The next spring, the studio scored a huge hit with the thriller Get Out, written and directed by Jordan Peele. QC told Stallworth that Peele had read his book and wanted to produce and direct Black Klansman as his follow-up project.

Shortly after, Stallworth got a call from the head of QC. Peele would still be producing the film, but someone else was stepping in as director.

“I asked him, ‘Who?’ And he said, ‘Spike Lee,’” Stallworth said, referring to last year’s Academy Award recipient for lifetime achievement in directing. “I was even more tickled to death with that news. He apparently read my book, liked it and contacted Jordan to tell him he’d like to direct it. I had no goals in mind, no particular intention, other than to tell the story that I had been a part of those many years earlier. So, when Hollywood came calling, it was a pleasant surprise. Then it was a shock to the system when I get the top two black directors right now in Hollywood saying they want to take it on as a project.”

Black Klansman, the book, is also set for an updated national release, in hardcover, through Flatiron Books, a subsidiary of Macmillan Publishers, next fall. Stallworth is intent on not letting this new level of celebrity go to his head. 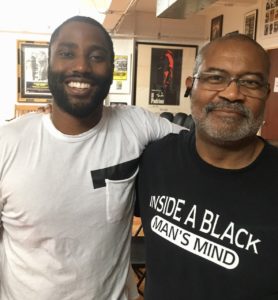 Ron Stallworth with actor John David Washington, who will be playing the part of Stallworth in the Black Klansman movie.
(Photo submitted)

He’s still the same man that devoted his career to law enforcement, sought out a college degree when he was through, then earned the Columbia College Alumni Relations Community Service Award in 2010 for his work coaching youth sports teams in Salt Lake City and serving as an expert on gangs at the state and local levels.

“My Columbia College experience has been wonderful,” Stallworth said. “I enjoyed the learning process. It was very pleasant, very friendly at the Salt Lake campus. And, subsequently, when I got to know people at the main campus, who were very open, warm people. I have nothing but positive things to say about Columbia.”

He and Patsy live in El Paso, Texas. They graduated from high school together in 1971. After the tragic death of Stallworth’s first wife, Micki, from cancer in 2004, Stallworth says he wandered in an “emotional wilderness” for six years before he and Patsy started talking again in 2010. Stallworth says her love, dedication and devotion to him has brought him out of that wilderness.

“My wife and I have made a commitment that there will be no sense of celebrity with us,” Stallworth said. “We’re not going to get caught up in the hype of what’s happening to us. It’s nice. We enjoy it. But we have a very simple, humble life. We have no intentions of becoming Hollywood celebrities or playing that scene. We just refuse to let it happen.

“I’m just enjoying this journey with my wife. We’ll ride it for as long as we can, then see what the next chapter brings.”