Columbia College has around 270 student-athletes on campus who compete in its 18 athletic programs, all of whom know that getting an education is just as important as competing in their respective sports.

Here is the story of two — volleyball player Gabriela Walton and women’s soccer player Laurie Frew — who are emblematic of the academic and athletic achievement Cougar Athletics strives for.

From Colombia to Columbia College

Columbia, Missouri, is a bit different from where Gabriela Walton grew up in Cartagena, Colombia.

For one thing, Cartagena is situated on the Caribbean Sea, so Walton was never very far from the beach. Columbia, Missouri? Well … it’s a little more landlocked than she’s accustomed to. 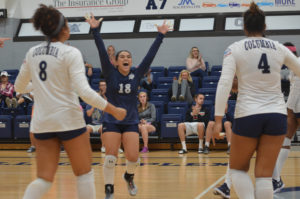 “(Cartagena) is so different from here,” Walton says. “The weather and the culture are way different. I’ve had to adapt myself to these changes.”

Walton found a way to acclimate herself to her new surroundings and succeed both in the classroom and on the volleyball court for the Cougars.

On the court, Walton was Columbia College’s defensive specialist — the libero. This season, she led the team with 4.37 digs per game and also passed at an impressive 95-percent clip. It was her job to be the team’s main communicator. The Cougars ended the season with a 34-8 record — the program’s 30th straight season with at least 30 wins — and earned a spot in the NAIA National Tournament.

“For us to make our system work, it has to start with the passing. I have to do a great job passing and encouraging the other players to make a good pass,” Walton says. “So I have to talk a lot all the time, being a leader on the court. I talk to the blockers about doing good at block set so I can dig and we can do a better defensive job.”

Those skills will prove beneficial in her career after college as well. Walton is a senior majoring in international business and marketing. She says her favorite classes have been Consumer Behavior and a Principles of Marketing class she took with School of Business Administration Dean Shanda Davis.

Walton, an academic all-conference selection each of the past two years, plans to graduate in the spring and use her work visa gaining experience for a post-graduate year before applying to graduate school close to family members in New York City.

She’s aiming to attend New York University or an Ivy League school with an academic scholarship sponsored by her country.

“Marketing is all about persuasion and how we can influence people,” Walton says. “I like the idea that we can shape people’s perception through specific strategies.”

If Laurie Frew had stuck with her original college plan, she’d have just finished up her soccer career at the University of Central Missouri in Warrensburg.

Instead, after moving away to campus following high school, the Columbia native decided it wasn’t the right fit for her. She wanted to be closer to home. 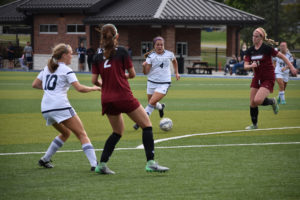 And she couldn’t get much closer than Columbia College.

“I was just going to come back and be a student at Mizzou. But Coach (John) Klein reached out to me and asked if I would like to come play here,” Frew says. “I didn’t really have any expectations, I guess. But I gave it a chance, and it’s worked out.”

That’s an understatement. Over her four years playing for the Cougars, Frew set the program record for goals with 72 and was a four-time first-team All-American Midwest Conference player, including her 2015 and 2017 conference player of the year awards. She and teammate Jordan Poire also became the first Columbia College women’s soccer players to earn NAIA All-America third-team honors this season.

Frew was a key part of the nucleus of native mid-Missourians that helped Columbia College go from new program to an annual national tournament contender and 2016 national quarterfinalist in just five seasons. The Cougars finished this season 21-2, bowing out in the second round of the NAIA National Tournament.

“We’re just building a very positive culture that good players from everywhere are wanting to be a part of,” Frew says. “But it’s also really cool that the core group of our team is from Columbia. Everyone just buys into wanting to win championships. Everyone is very close, including the coaching staff. It’s just a really cool thing to be a part of.”

Frew, who was a first-team academic All-American the past two years, is on track to graduate in the spring with her education certification. She will spend her final semester student teaching and hopes to work with elementary school children in her career.

“I knew I wanted to work with people, and I really like kids,” Frew says. “I think teachers really impact other people’s lives. Coaching is something I want to get involved in, too, so I thought education would be a good route to take.”