Freshman Hannah Ricketts is the oldest sibling in her family, so she’s the first to leave home for college.

Even though Columbia College’s main campus is just down Route B from her home in Hallsville, it’s still a different world. And, even though Ricketts’ mother, Shawn, graduated from Columbia College in 1992, things have changed a bit around campus since then. 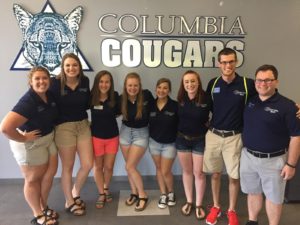 So Hannah is happy to have her First-Year Mentor, senior chemistry major Leah Hoveln, to lean on.

“I already look up to her, and I just met her (at the beginning of fall semester),” Hannah says. “I have no idea how anything works. It’s really nice talking to her about simple things. It’s nice having an older sibling, I guess you could kind of say, who knows the ropes around here.”

Hoveln is one of eight upperclassmen who serve as First-Year Mentors for new Columbia College students. Each First-Year Mentor is responsible for co-facilitating at least one Introduction to Columbia College class — Hoveln and another mentor co-facilitate two — as well as arranging a half-hour meeting with each member of their new student cohort in the first weeks of the fall semester.

In the past, Community Consultants handled both the orientation events and the INCC classes. This year, for the first time, the group of student leaders split up into Orientation Leaders and First-Year Mentors.

Ricketts is one of 33 students that Hoveln has in her group.

“I love Columbia College, and I want everyone to have the best experience they can have while they’re here,” Hoveln says. “I think it’s really important students know there is someone you can always go to. There are always resources available on campus. I just wanted to be a part of that and help make their transition to college and, hopefully, their next three or four years here better than they would have been otherwise.”

Kim Coke, who served as director of new student programs in the Student Affairs office before recently transferring to Student Support Services as an advisor, says First-Year Mentors come from two main sources. Student leaders identify younger students in their groups who they think would make good mentors and recruit them. Freshmen and sophomores also approach Coke and ask for ways in which they can get involved.

Each student applies for a position and goes through an interview process to see where their skills would be best utilized. They also go through a preparatory course in the spring that primes them on topics such as peer advising, community building, active listening and handling crisis situations.

By the fall, they’re ready to be role models for the new students.

“Between the Orientation Leaders and the First-Year Mentors, they really set the climate on campus as far as how our culture is going to be. We definitely want it to be a caring culture,” Coke says. “I think they’re phenomenal. They put themselves out there quite a bit and really do great work.”

The new students get a built-in support structure as soon as they arrive on campus. The mentors, too, get to learn skills that will help them in their careers.

Hoveln says that her time in the First-Year Mentor program has given her valuable experience in contributing to a cohesive group of mentors, as well as taking a leadership role with the students she helps guide.

Coke hopes that all of the mentors are getting a multifaceted experience that they can build on for the rest of their lives.

“It’s all the non-tangibles of being in a position where you’re helping others, growing through that process, where you truly are role-modeling for other students on campus,” Coke says. “There is the part where they’re gaining skills that they can apply into their career, then there’s the other part that’s really about the relationships they build and the growth that comes from that.”

Hoveln took the LSAT in the fall and plans to go to law school to study patent law. Ricketts, a member of the Cougars track team, is a biology major on a pre-med track. She is interested in pediatrics, but says that could change in the future.

They’re developing a bond through the First-Year Mentor program, one that Ricketts hopes she can duplicate as an upperclassman in a couple of years.

“It’s just kind of cool because I was a senior mentor to the incoming freshmen (at Hallsville High School), so now it’s reverse roles,” Ricketts says. “I’m glad I have Leah as someone to talk to.”