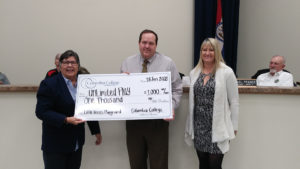 Columbia College-Fort Leonard Wood believes in giving back to the community.

The location’s philanthropy was on full display at the Waynesville City Council on Jan. 18, when director Michael Siegel and academic advisor Mona Russell presented mayor Luge Hardman with a check for $1,000 to go toward the new Little Heroes Playground in Waynesville Park.

The playground, which is currently under construction and being funded entirely by donations, will provide a wheelchair-accessible place to play for the children of Waynesville. Columbia College-Fort Leonard Wood raised the money for Little Heroes through hosting the city’s annual Zombie 5K Walk/Run and Trunk or Treat events on Oct. 28, 2017.

The location also raised $1,000 for Janet’s Wish, a local nonprofit organization that provides services to people that are in hospice with terminal illnesses and their families, from the events’ proceeds.

Columbia College-Fort Leonard Wood also participated in the Waynesville-Saint Robert Chamber of Commerce Polar Meltdown Chili Cook-Off on Jan. 20. Participants were encouraged to donate money to support their favorite chili of the day, with proceeds going toward the chamber’s “Right Choice” scholarships for college students from the area.

Columbia College’s chili, with a recipe provided by Russell, won “Best in Show” and the “Showmanship Award.”

Siegel says the location will be hosting the city’s Zombie 5K and Trunk or Treat again this year.

“When we raise money, we like to keep it local, so that we’re helping people here and have a bigger impact on the community we are part of,” Siegel said.