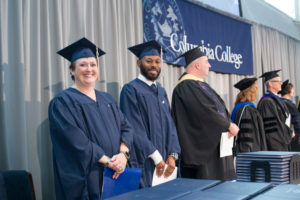 From her perch on the stage at Southwell Complex, Amy Kiso Bledsoe could see that her words were having the desired impact.

Bledsoe, the last of Columbia College’s two student speakers at the fall commencement ceremony Dec. 16, peered out into the crowd of fellow graduates, families, friends and other guests during her speech and didn’t see a ton of dry eyes.

“There were many who were crying, others who were not crying but were on the verge,” Bledsoe said. “It’s not like I wanted to make everybody cry or anything. But cancer does touch everybody in some form. Everybody can relate.”

Bledsoe, who completed her Master of Business Administration with Columbia College this fall, is in the midst of her second bout with cancer. Shortly after she returned to school in 2012 to pursue her MBA — she already had a bachelor’s degree and a Master of Education from Northwest Missouri State and Lincoln University, respectively — she was diagnosed with breast cancer.

In the spring of 2016, about three years after being declared cancer-free, it came back: stage four and terminal.

She urged those assembled at Southwell Complex to treat life as something precious: make the most of it.

“I was always aware of my emotions, and I did get choked up a few times,” Bledsoe said. “It was very moving, and I was very touched to see how it impacted so many people.”

Bledsoe and fellow MBA recipient D’Markus Thomas-Brown addressed more than 300 graduates and the rest of the crowd at the fall commencement ceremony, the first time in school history that students handled commencement speech duties. 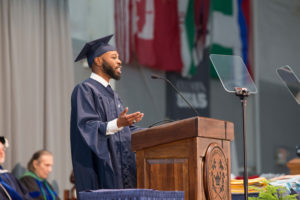 Thomas-Brown, who also earned his bachelor’s degree from Columbia College, shared a similarly uplifting message to Bledsoe’s, about overcoming obstacles and bettering yourself and those around you through education.

Thomas-Brown works as an account manager at MBS Textbook Exchange in Columbia and is also a church pastor, so he has experience speaking in front of groups. He had never had the opportunity to speak to a crowd the size of the one that packed into Southwell Complex.

“There are some atmospheres where it’s not very welcoming and you’re kind of like, ‘Wow. Tough crowd.’ This was not that,” Thomas-Brown said. “It’s kind of indicative of the culture that has been here at Columbia College. It was very welcoming. I felt like the graduates and faculty, the family there, they wanted you to do well.”

Thomas-Brown and Bledsoe both intend to use their master’s degrees to further their careers, Thomas-Brown through entrepreneurial opportunities and possibly getting into teaching, Bledsoe through adding to the managerial and financial skills she brings to her role as the executive director of the Governor’s Council on Disability.

Thomas-Brown says he was impressed by the mixture of scholarly learning and hands-on expertise that his teachers imparted during the MBA coursework.

“Every instructor I had, when you looked at their credentials, it was almost daunting for some. Like, ‘Wow, this person is teaching our finance course and they were an advisor to a small country somewhere,’” Thomas-Brown said, with a laugh. “We were equipped not just with knowledge and course hours, but with an atmosphere and culture that we can take and influence what’s around us.”

The fall commencement ceremony was a chance to acknowledge the hard work of all the graduates, a chance for families and friends to come together and celebrate the part everyone played in helping the candidates toward their degrees.

For the first time since high school, Bledsoe was able to take part in her commencement ceremony, and she had a sizable cheering section. Her sister even came in from Florida. 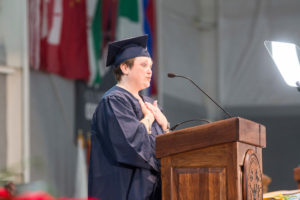 “My mom had talked about how we were not going to celebrate Thanksgiving and Christmas. Instead, we were just going to do a celebration for my graduation,” Bledsoe said. “I ended up talking her out of that. We made it a big celebration: a whole weekend thing. It was great.”

Thomas-Brown, too, had a large contingent of family and friends in attendance, and he heard from them about the care Columbia College took in making the ceremony special. They noticed touches such as the Jane Froman Singers syncing their song choices to the theme of the two speeches and the college faculty lining the aisles to greet the graduates as they entered.

Not to mention President Scott Dalrymple offering to buy a meal for whoever traveled the farthest to get to Columbia College that day.

“It felt like a big family reunion,” Thomas-Brown said. “You felt that accomplishment, that weight of ‘I’m part of something bigger than myself,’ and your family was welcomed to join in that. It was a very good feeling.”

Here are the speeches Bledsoe and Thomas-Brown delivered at the commencement ceremony:

Check out pictures from the Columbia College Fall 2017 Commencement Ceremony below! 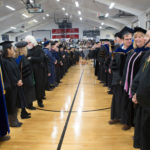 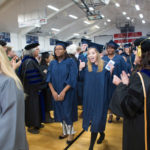 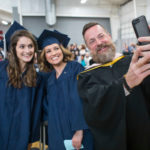 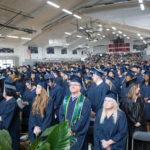 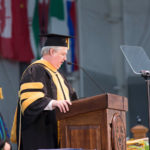 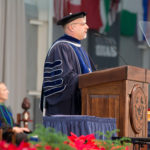 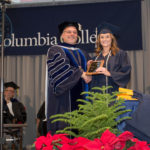 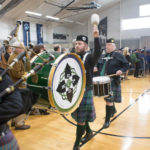