The summer of 2017 was a season of change for Ryan Frazier. 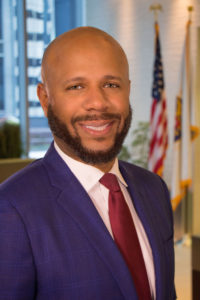 The 2002 Columbia College-Denver graduate spent the past 20 years in the Denver area, but he and his family recently made the move to Chicago, where he now works at the headquarters of the American Hospital Association (AHA).

After career paths that included city councilman for the city of Aurora, Colorado, and senior advisor to the CEO of an air medical transport company, Frazier took on the role as the AHA’s senior vice president of member relations in June. It’s a post that allows him to interact and advise on a regular basis with “C-suite” executives — such as CEOs, CFOs, COOs and CIOs — in America’s hospitals and health systems.

He’s been rather busy lately.

“It’s been drinking from the proverbial firehose,” Frazier says. “There is so much to learn and so much to understand.”

Frazier first met AHA president and CEO Rick Pollack when Pollack was the organization’s executive vice president and Frazier was head of government relations and senior advisor to the CEO at Air Methods Corporation in Englewood, Colorado. Frazier worked with the AHA through the Coalition to Protect America’s Health Care, an advocacy group founded in 2000 that speaks for the importance of hospitals in American communities.

When Pollack sought out Frazier to join the AHA, Frazier jumped at the opportunity.

“I believe that the AHA does some of the most meaningful work in the country to advance health care in America,” Frazier says. “It was such a big opportunity to come do meaningful work in an area that I care about deeply that I decided this was a really good move for me to go help make a difference.”

It is a continuation of Frazier’s life work since graduating from Columbia College. In addition to his post at Air Methods Corporation and serving as a city councilman from 2003 to 2011, he is a former member of the Business Advisory Council of the Coalition to Protect America’s Health Care and a former Heath Research & Educational Trust senior fellow.

He has fostered a keen interest in government, public policy, health care and business.

“Ryan is a highly capable and well-respected leader with great communication skills, and his diverse background in business, community service and public service will be an asset to our association,” Pollack said in a June press release. “We are very excited to welcome Ryan to the AHA team, and look forward to his leadership in developing innovative and creative approaches for continuing to engage our membership and other key partners in working to advance health in America.”

Frazier attended a semester of college straight out of high school before deciding to follow an interest in military intelligence and withdrawing to join the Navy. He was assigned to the National Security Agency and stationed in Colorado, where he resumed his college education.

Looking around the Denver metro area, he couldn’t find a better fit for his budgetary and military needs than Columbia College.

“I think Columbia College is one of the most military- and veteran-friendly colleges I know of,” Frazier said. “The staff and the team were so customer-friendly and accommodating. I knew I had the ability, with their support and my drive, to complete my bachelor’s degree and continue to move forward with my life. They really made a military veteran like myself feel right at home.”

After taking a combination of in-seat and online classes to earn his Bachelor of Arts, with an emphasis in marketing, from Columbia College, Frazier went on to receive a Master of Science in Organizational Leadership from Regis University in Denver.

“(Columbia College) really does enable people of all backgrounds to get a good education and complete their aspirations for an undergraduate degree or even a graduate degree,” Frazier says “I was just really impressed with the fact that the team there was so focused on us and helping us to get there. I think that was what made it stand apart. You didn’t just feel like a number, another person at the school. You really felt like you were someone to the people at Columbia College.”

In his first months at the AHA, Frazier undertook a “listening tour.” He went around the country and spoke with the stakeholders — health system and hospital leaders, state hospital association executives and members of his own staff — to get a handle on what has been working and what needs to be augmented.

The goal: to help take the AHA to the next level.

“This is about making a difference in the lives of people,” Frazier says. “The American Hospital Association is doing that each and every day. I intend to take this opportunity to really just lead in the field of health.”