We Are CC: Commencements around the country

For the directors at Columbia College’s four locations in Illinois, planning for the next commencement ceremony begins before the previous one even takes place. 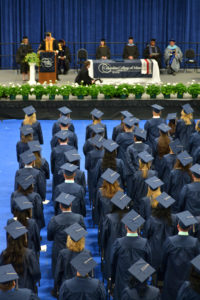 The Illinois locations’ spring commencement ceremony was one of 25 ceremonies that celebrated Columbia College graduates during the 2016-17 school year.
(Photo submitted)

There’s a venue to reserve, a date to lock down, a roll of students eligible to graduate that needs compiling. The staffs at Crystal Lake and Elgin do the heavy lifting for the Illinois locations’ spring commencement — which usually takes place in May — while the Lake County and Freeport staffs provide support. For the fall commencement that takes place three months later, the roles are reversed.

“It does kind of feel like we’re in commencement season year-round for different ceremonies,” says Debra Hartman, director of Columbia College-Crystal Lake and Region II. “We’re always on the lookout for opportunities to talk about commencement. We’re constantly promoting it with our students. It’s not just for them. It’s also for the people in their lives who have supported them through their educational journey. I tell them to think of it as an exclamation point on this very big accomplishment.”

Taking in the annual winter and spring graduation ceremonies at the main campus in Columbia, Missouri, can give a little insight into how Columbia College handles the pomp and circumstance of the occasion, but it doesn’t even get close to the full story. In 2016-17, Columbia College had nearly 2,000 graduates walk across the stage at a total of 25 different commencement ceremonies at 24 different venues, all with different scopes, different feels and different characters of their graduating classes.

One thing remained the same throughout all the ceremonies: Scores of people teamed together to provide a special day for the graduates, their friends and families and everyone else in the room. It just so happens that room was situated in a hotel ballroom, a ship docked in California’s Queensway Bay and all points in between.

“Columbia College is Columbia College to me. There isn’t any difference in the quality of education,” says Janette Roberts Nichols ’00 and ’02, a Columbia College Admissions contact coordinator and former member of the CCAA Advisory Board. “We serve a multitude of students at a lot of different campuses. It’s nice to see how far we’re able to touch the students.”

Venues with Character
Columbia College-Los Alamitos director Carl David has a standing order to be the first mate on the Queen Mary for one day a year.

For the past nine years, David has boarded the ship — a 1930s era ocean liner that is now a hotel and events center docked on Long Beach — the night before the Los Alamitos commencement ceremony and stayed until around 10:30 that night in order to get everything prepared. 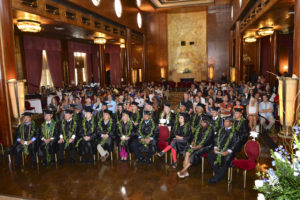 The next morning, he rises well before the afternoon event, antsy with anticipation.

“I’m a retired Army lieutenant colonel, so I have to make sure everything is perfect,” David says, with a laugh. “My wife puts up with that.”

David keeps coming back to the Queen Mary for a couple of reasons. One, the uniqueness of the venue draws online students from all over the Los Angeles area to join the Los Alamitos graduates. Students and faculty in regalia are greeted by other ship patrons on the promenade deck, they get to occupy the same stage Bob Hope once performed from in the Queen’s Salon, and they get a breathtaking view of where the Pacific Ocean meets Long Beach.

Two, the ship holds a special significance for his Army graduates. It served as a transport vessel for troops heading off to World War II.

“It’s very, very intimate, even with the regal setting of this place. So that warms my heart,” David says. “It doesn’t get old. It really doesn’t. It’s really special. And knowing that a lot of them are vets and they’ve been putting this off, and they’re finally doing something about their education, it’s even more special.”

Illinois location graduates get the same sort of grandeur in their fall ceremony, just without all the waves. The Genesee Theatre in Waukegan, a 1920s era concert hall and movie theater, usually holds the fall event.

“The theater is very ornate, with a balcony and all the trimmings that go along with an old theater,” Hartman says. “We spare expenses with flowers at the Genesee because it’s so beautiful. Something really neat is that we are able to use the marquee outside to congratulate our graduates. It is a great informal photo opportunity for graduates and families.” 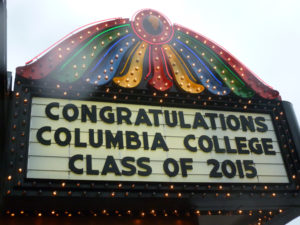 For the Orlando ceremony, one of the largest among Nationwide locations, director Aaron Williams faces the challenge of making sure the day goes smoothly when it comes to logistics, while still providing a unique experience for the sizable crowd that shows up. That task gets even taller in 2018, when the Jacksonville and NAS Jacksonville locations join Patrick Air Force Base for the Orlando event.

Williams held the 2017 event at the historic Bob Carr Theater in downtown Orlando. For next year, he’s thinking bigger: the Orange County Convention Center on International Drive, a half-hour outside the city by Sea World and other tourist attractions.

“When you step up to that podium, it’s pretty intimidating,” Williams says. “Knowing there’s going to be a lot of folks coming in, even though it’s kind of chaotic, it’s a glorious day. You’re happy for the students, and the staff is happy we could get to this day so we could get the excitement over with.”

Honoring Achievement
Every location has its own special way to honor the achievements of their graduating class and the people who have helped them get to this point. It can be securing extra help for students with special needs, rearranging the walking order so that family members who are graduating in the same class can have their picture taken up on the stage together, or sending out special commencement invitations to online teachers who live within a radius of the ceremony.

Hartman says Dr. Edith Bell, an online business faculty member, has come to Illinois location commencements the past four years through that process.

“It’s fabulous to see it all come together,” Hartman says. “Very often as I stand there as a director and my assistant director is calling names, I think to myself, ‘How could they possibly have graduated already? When did that happen?’ I recall what they were like when they started with us. Oftentimes, even as adults, they were scared and unsure of themselves, while being excited all at the same time. And here they are walking across my stage, and I’m shaking their hands and talking to them about graduate school or their promotion at work. It really is a wonderful day and an honor to be a part of it.”

For those who can’t walk in a ceremony, Columbia College has a way to honor them as well: the “virtual commencement” webpage (www.ccis.edu/virtualcommencement). The site hosts video addresses from the main campus commencement speaker and the provost, as well as giving the students an opportunity to fill out an information form about themselves to be featured as their own personal page on the website. 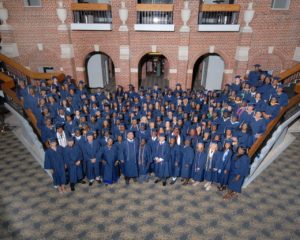 Graduates from the Orlando and Patrick Air Force Base locations pose in the hallway of Orlando’s Bob Carr Theater.
(Photo submitted)

Students can scroll through locations and majors, find their page, then hear their name and degree read while traditional commencement music plays in the background, all from their computer.

“That’s when you get most of your gratification, to see those students find the intestinal fortitude to work through it and get to that day,” Williams says. “All the people who don’t care about their education, they’ll get weeded out. They’ll start figuring out that everyone here is taking this seriously. Those are the students I see walking across the stage at commencement, those who are serious and know what they want to do with their diploma.”

Every ceremony, right before the closing remarks, benediction and dismissal, an alumnus or alumna leads all the newest graduates in the “alumni charge.” It’s often a notable graduate from the location’s area, like Rhomello Saddiq, the 2015 San Diego graduate who gave this year’s charge at his home location. He thought he was done with school until he got to graduation day and director Diana Schriefer asked him, “What’s next?”

The answer, it turned out, was a master’s degree and a job with the Department of Homeland Security. Dr. Sarah Vordtriede-Patton, Columbia College’s dean of the School of Natural Sciences and Mathematics who gave the commencement address at the San Diego ceremony last year, says he led one of the most energetic “We are CC!” cheers she’s ever heard.

“I don’t think I’d have accomplished what I have today without all I’ve received at Columbia College through the years,” says Nichols, who has given the alumni charge at the Lake of the Ozarks, Rolla and Springfield locations. “It’s an emotional experience to see the look on their faces when they accomplish this. If I could do this full-time, at all the locations, I would be in heaven.”