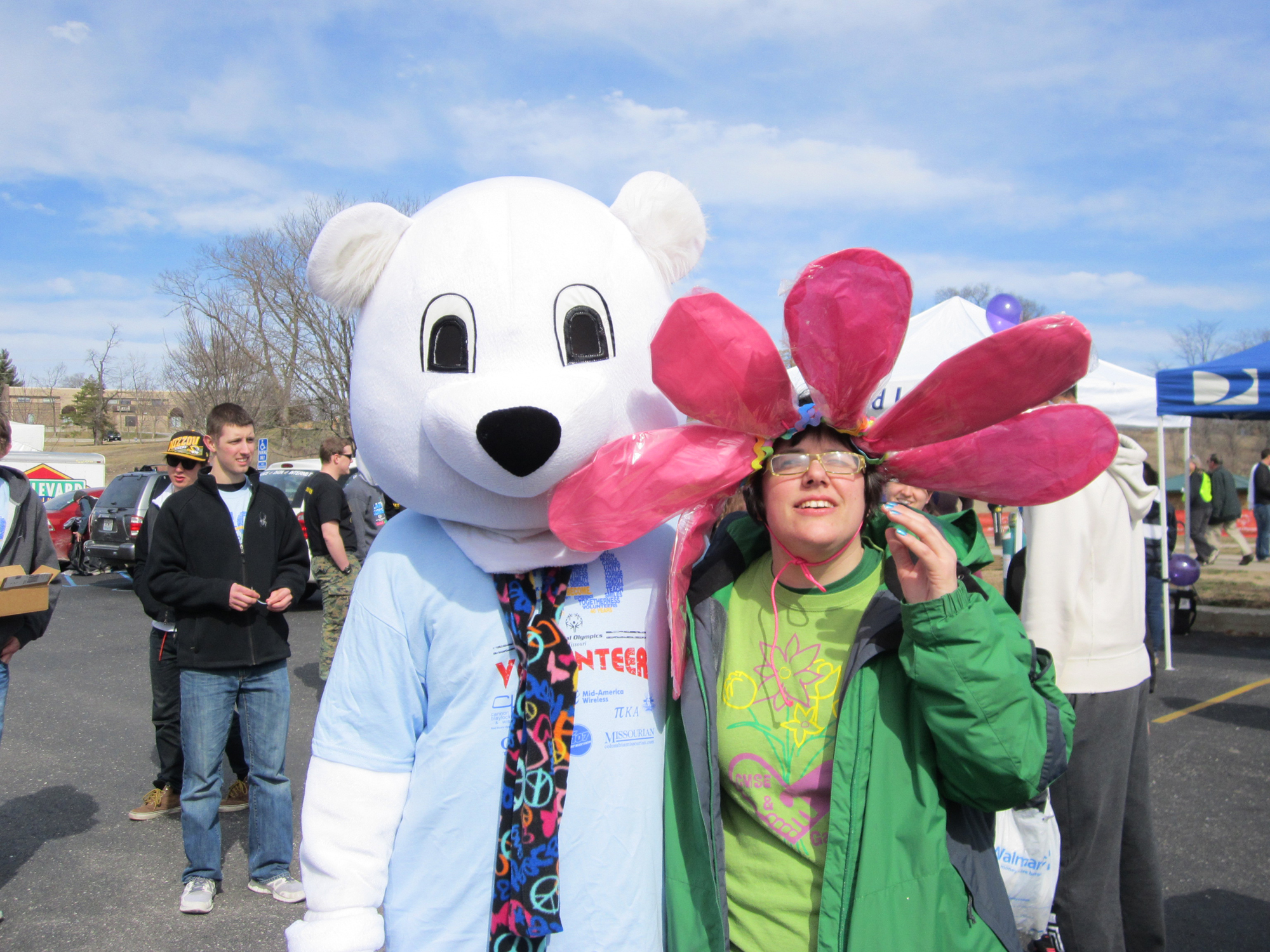 During his time at Columbia College, Tanner Sutton knew he could count on one thing for certain: a warm reception and a smile from Sarah Byland every time he entered Dulany Dining Hall. 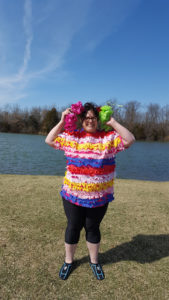 Sarah Byland has participated in the Special Olympics Missouri Polar Plunge benefit 10 times. Byland, who works in Dulany Hall at Columbia College, is an ambassador for the event this year.
(Photo submitted)

Sutton, who graduated in 2014, first came to Byland’s attention during his freshman year, when she saw the Camp Barnabas water bottle he carried. Camp Barnabas is a summer camp in Purdy, Missouri — about halfway between Joplin and Springfield in the southwest corner of the state — for people with special needs and chronic illnesses.

Sutton had worked at the camp. Byland, who works in Dulany Hall, had been a camper. They hit it off right away.

“That was how the friendship started,” Sutton said. “If you’re in a conversation with her, she is constantly asking questions because she wants to really get to know you, as opposed to her just talking about herself. She is a very unselfish person. She’s been a real great influence on my life and Columbia College. Sarah has been an awesome friend.”

You could poll the entire body of students, faculty and staff at Columbia College’s Day Campus and find a bunch of similar stories to Sutton’s. Byland is a consistently friendly presence in the dining hall, smiling at everyone who walks by and eager to engage in conversation.

If she doesn’t know you, she’ll ask what your name is. If she does, she’ll greet you and ask about your life.

Byland, who is intellectually disabled, is an accomplished athlete. During her Special Olympics career, she has participated in sports such as bowling, swimming, golf, cheerleading, track, softball, volleyball, tennis and bocce ball. She is also a frequent participant in the Polar Plunge, the yearly Special Olympics benefit event in which the brave assemble at a body of water during the winter and dive right in.

This will be Byland’s 11th year taking the plunge. It will be her first as an official Polar Plunge Ambassador for Special Olympics Missouri. Her job is to spread the word about how much fun the event is and how much the funds raised for the plunge help the Special Olympics. 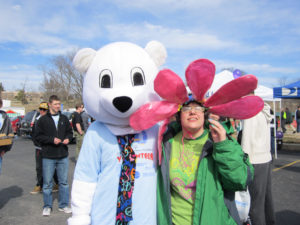 Most of the Polar Plunge participants wear themed costumes to the event, with teams coordinating on matching outfits.
(Photo submitted)

She is definitely qualified for the job.

“It’s just her excitement and the fact that she likes people so much, and she likes talking to different people and just sharing with them how much fun it is that makes her the perfect ambassador,” said Sarah’s mother, Jeanie Byland. “If she can express to them how much fun she’s had doing it, then I think that lets people know, ‘This must be fun. We should do it, too.’”

This year’s Columbia event will be held at Bass Pro Lake on March 3, with registration opening at 10 a.m. and the plunge happening shortly after the “parade of costumes” at noon. It is one of 13 plunges happening around the state this winter. In order to participate, you have to be at least 10 years old and raise at least $75 for the nonprofit.

“It’s one of the biggest fundraisers statewide, and it helps these athletes all get to participate in Special Olympics,” Jeanie said. “The Special Olympics is such a wonderful thing for the people with intellectual disabilities, to help them in more ways than sports.”

Jeanie said she tried the plunge one time, but it wasn’t really her thing. Sometimes the water is freezing. One year, event organizers needed a backhoe to cut a hole in the ice at Stephens Lake Park just so the plungers could reach liquid.

But Sarah has convinced others to join her over the years, including Sutton and his former Columbia College basketball teammate, Zach Rockers. 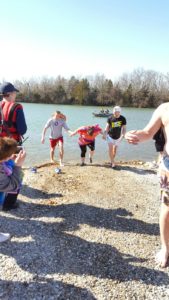 They had both struck up a friendship with Sarah during her visits at the dining hall and went to watch her plunge for a couple of years, with Sarah egging them on to give it a try.

Sutton and Rockers took the plunge for the first time last year. This year, they’re coming back for more.

“Sarah wants to be holding my and Zach’s hands, and she does not want to jump in the water. She wants to tiptoe in and only go up to about her waist, then get out,” Sutton said. “It’s pretty brutal in the water. She doesn’t just jump in, then get the heck out of there.”

As ambassador this year, Sarah gets to start the festivities by reading out the Special Olympics oath. Stegeman said Sarah is one of only two to graduate from the organization’s Athlete Leadership Program, in which athletes choose a topic, a mentor and a course of study, then report back for grading and eventual graduation.

“I love her heart,” Stegeman said. “She’s a good friend, a good person.”

Sarah has made a number of personal connections through her work at Columbia College. When she attended the Tim Tebow Foundation “Night to Shine” dance for people with special needs on Feb. 9, the Cougars women’s basketball team greeted her like a celebrity on the red carpet outside the event, all wanting their pictures taken with Sarah.

“It’s just a great place for her to work,” Jeanie said. “It’s nice how she has made so many friends from her job there and how exceptional the students are at Columbia College.”

They would say that Sarah is pretty exceptional herself.