Duane Cummings bestowed upon himself a Guinness World Record, and it is not something in which he takes pride. 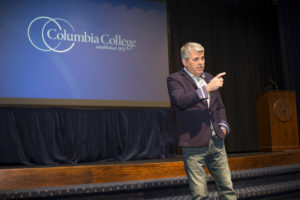 Back in the 1990s, when he was first getting started in his management career, Cummings claims he held the record for “worst leader on the planet.”

Somewhat ironic, given that now Cummings is the CEO of Leadercast, an Atlanta-based organization that helps other individuals, teams and organizations build leadership skills. Leadercast has worked with such multinational corporations as Dell.

“I thought it was all about position. I would think that, just because I was in charge, you should do whatever I say,” Cummings said. “It’s never about the title. Leadership is all about service: serving others. It took me a long time to figure that out.”

The change, Cummings told a group of around 80 Columbia College employees in Dorsey Gym on Jan. 29, started when he was able to admit to himself that he didn’t know all the answers, that he needed help from others around him who were more experienced.

When he decided to stop, in his words, being a “turd.”

“If you want to change something in the world, change yourself,” Cummings said.

Cummings spent the day at Columbia College on Jan. 29, holding four separate sessions for the school’s staff, Admissions department, student leaders and student-athletes. The morning session with staff, an hourlong talk and question-and-answer period, was presented by the Customer Service Committee and centered on the theme “Trust in the Workplace.”

Jeff Barringer, assistant director of recruitment in the Columbia College Admissions office, made a connection with Cummings on a Leadercast Expedition to Kenya in October and invited Cummings back to the college to speak.

The college then hosted an evening lecture in partnership with Show Me Leaders, which was open to the public with Cummings speaking on how to live “a sensational life” and improve as a leader. He’s well-versed on that topic.

From there, he started his own clothing line, then became a partner in an oil and gas company and, after selling it, was going to spend some time writing a book. That’s when Leadercast came calling.

“I wanted to use it as a laboratory to do all the great leadership things that big organizations are doing,” Cummings said.

He put into practice that which eluded him as a young soccer coach and GM.

“I learned that I’m going to serve the people that work for me,” Cummings said. “When I liberated the workers who were there and let them know I was there to serve them, there were different results.”

In the workplace, breakdowns in trust result mainly from breakdowns in communication, Cummings said. Trust is a primal survival instinct, passed down through generations.

It’s how the handshake evolved, Cummings said: so that, upon meeting new people, you could make sure they didn’t have any weapons hidden up their sleeve.

“Trust is the most important thing you can have in somebody,” Cummings said. “What is your intention? What do you want from me? The faster you can let somebody know what your intention is, the quicker you can arrive at trust.”

And that, Cummings said, was part of the reason he was the worst leader in the world not too long ago. He told the story of how, shortly after he took over the Slickers, he traded a couple of players who weren’t living up to their potential. The Slickers met those players’ new team in the playoffs and lost.

Cummings had dinner with them after, and they let him know that the trade would not have been necessary if he had just sat them down and let them know what they could be doing better.

They’re all still friends to this day.

“Sometimes you’re going to be the pioneer, and you have to have people to advocate for you and trust you,” Cummings said. “Trust is built during times of adversity, when other people can trust that, when all heck is breaking loose, you’ll respond appropriately.”