The obstacles and harassment women routinely face in the entertainment industry have occupied the forefront of the national discussion lately, with revelations about the sexual misconduct of movie producer Harvey Weinstein and other powerful men in the industry spurring a powerful backlash in the form of movements such as “Me Too” and “Time’s Up.”

So it’s fitting that, to celebrate national Women’s History Month this March, Columbia College chose to honor the history of women in the arts through the theme, “Taking Center Stage: Celebrating Women Who Create and Inspire.”

“The committee’s intent was to begin a conversation on campus about how women experience obstacles in their pursuit of careers in the arts,” said Carmen Price, adjunct instructor of philosophy at Columbia College and co-chair of the school’s Women’s History Month Committee. “Some obstacles are unique to women or disproportionately endured by women, and they happen in all different forms of the arts, both performing arts and fine arts, to some degree.

“For instance, many people are aware that lead actresses in Hollywood films are often paid far less than their male counterparts. Fewer people know that the same is true in the world of fine arts, where the National Endowment for the Arts has determined that women artists earn 81 cents to the male artist’s dollar earned.”

The two centerpieces of the month’s programming are a keynote address from Dr. Stephanie Shonekan, chair of the Department of Black Studies at the University of Missouri, and a large-scale art installation by Columbia College alumna Valerie Wedel, which will be on display in the Atkins-Holman Student Commons on campus for the entire month of March.

Wedel, who earned her Bachelor of Fine Arts in painting and drawing from Columbia College in 2002, has created an immersive experience for passersby, featuring colored cords that hang down from the second-floor catwalk at the commons and culminate in voile fabric forms floating above the ground. 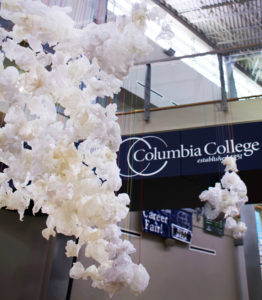 “It’s wonderful for students to see that, when they graduate from Columbia College, they’re capable of such imaginative and effective expressions, including large-scale, original art installations,” Price said. “What I really enjoy about walking into the space and seeing Val’s artwork is that she has reshaped that space on her own terms, and everyone who walks through the student commons is going to experience that.”

Shonekan’s keynote lecture, titled “Four Women: Black Women Sing of Life, Liberation, and Love,” discusses African-American musical artists from different eras and how their art reflects their identities and experiences while also making an unforgettable impact on the history of American music and culture. The lecture takes place in the Bixby Lecture Hall in the campus’ Brouder Science Center, at 7:30 p.m. on Thursday, March 8.

“The students will get a sense that the kinds of struggles that women face have been faced for a very long time,” Price said. “There’s a cautionary tale in that because, if women don’t maintain the progress of one generation, they will fight the same battle in future generations. No doubt, we have made progress, but it is very easy to lose ground.”

All members of the campus community are welcome to take part in the Women’s History Month festivities, which are free of charge. Other events include:

“It is important to recognize the accomplishments of people who are, to some degree, marginalized,” Price said. “An occasion like Women’s History Month is an opportunity to focus the conversation on what could be brought to the table by the people whose contributions are stymied at present, and on what it would take to fix that.”

You can find out more about the month’s festivities by visiting the Columbia College Women’s History Month website or Facebook page.