At home in her ‘Habitat’ 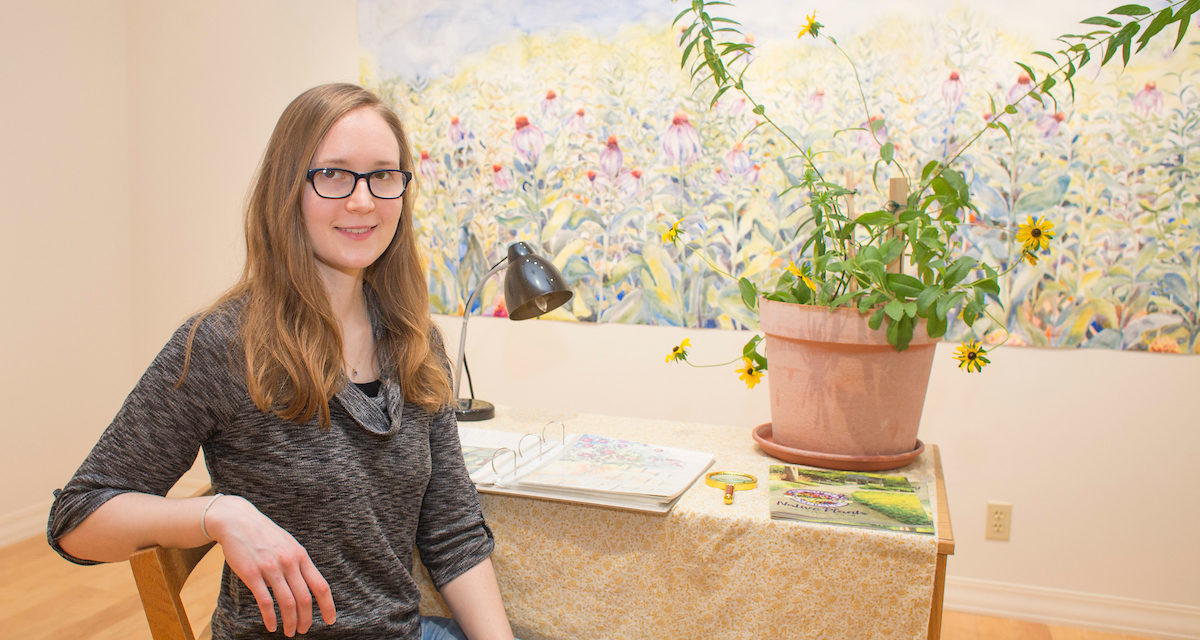 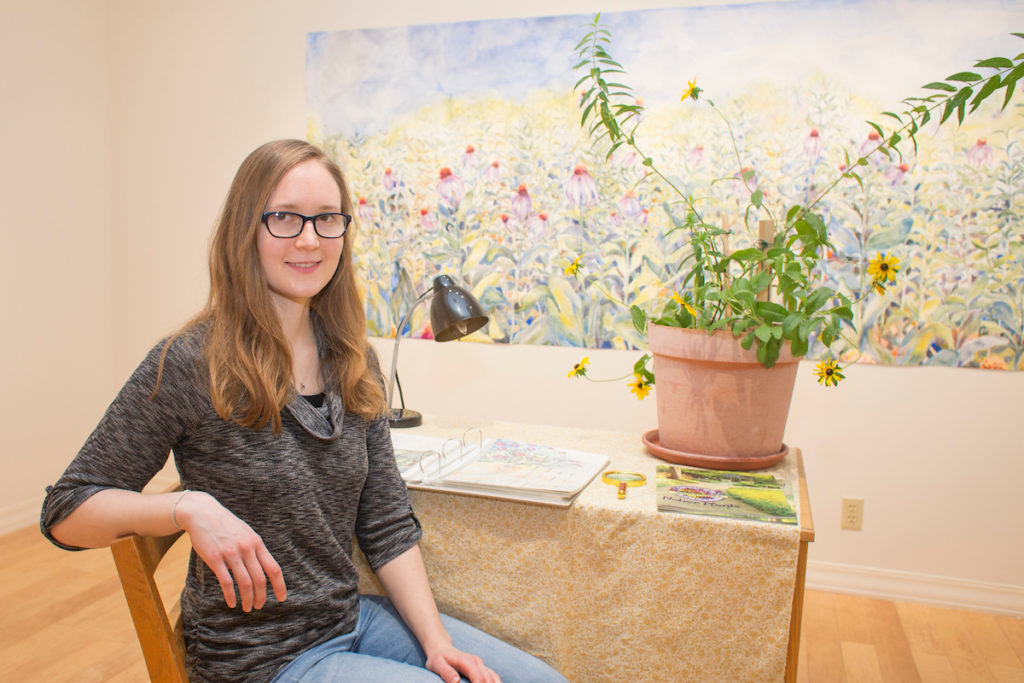 Painting with oil just was not capturing what Joelle Thompson was trying to express in her art.

She makes a point to use a non-toxic, eco-friendly palette of pigments in her work, and her oils would start to get clumpy and pasty pretty quickly. They weren’t doing an optimal job capturing the essence of the native Missouri wildflowers that were her subjects.

So she rediscovered an old friend: watercolor, even though Columbia College no longer offers classes in the medium due to a lack of student demand.

“I’ve used it ever since I was a kid,” Thompson said. “(My paintings) work better in watercolor form.”

Over 15 months, she completed all of the watercolor pieces that went into her Bachelor of Fine Arts exhibition, “Habitat,” which ran for a week in mid-April in the Sidney Larson Gallery in Brown Hall on the Columbia College main campus.

“Habitat” is a collection of works and sketches that depict the native flora around which Thompson grew up in Columbia, Missouri. It takes on a deeper dimension when coupled with the research on pollinators that Thompson has been doing for the past few years, the effect that the dwindling bee population is having on plant and human life.

She based her show around the habitats that those pollinators sustain.

“Everyone seems to really enjoy all the work,” Thompson said about her exhibition. “They say it feels like a breath of fresh air, it’s peaceful and beautiful. I do want to create that space, because I think that’s what nature does for us. But the people who have looked at my sketchbook pages have really seen the cornerstone of my work, that have read the research on pollinators and how they’re tied to these wildflowers, and how these wildflowers are important to the ecosystem.

“I really appreciate those comments. That’s really what drives all of this.”

Those funds, along with the aid she received through the school’s Columbia College Scholars awards, helped her bring “Habitat” to life: from creating the pieces, through mapping out blueprints of the exhibition space, to adorning the walls with vibrant works of art. 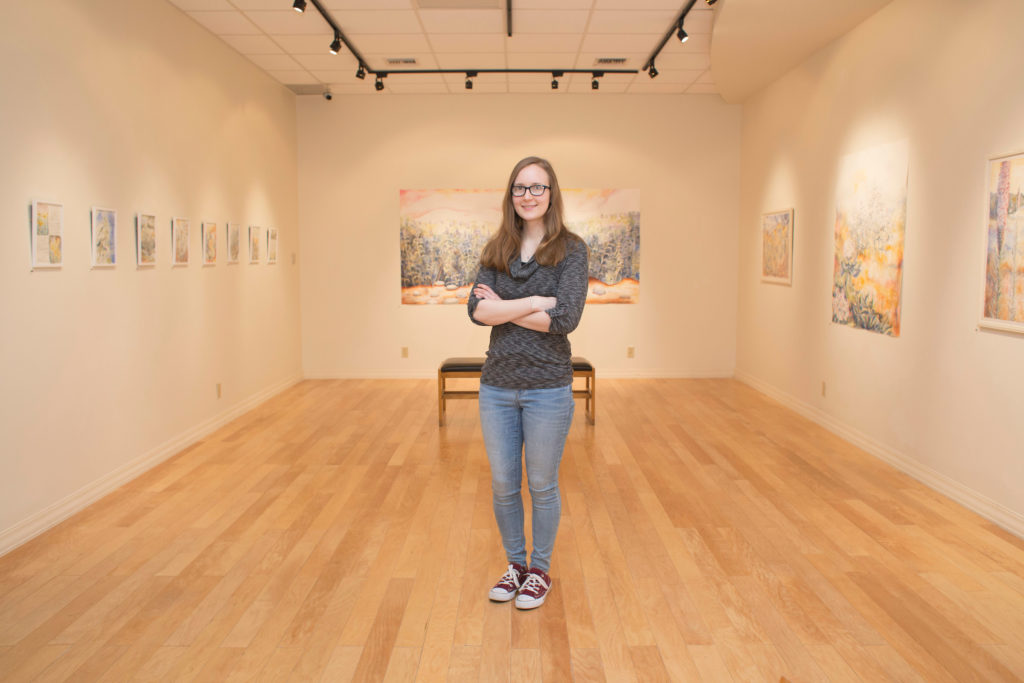 “Watercolor has an interesting history, because it hasn’t always been respected as much as oil painting or the other arts,” Thompson said. “I really enjoyed researching their organization, finding out what they do and why they support watercolor, specifically, as a medium.”

Thompson graduated with her BFA at Southwell Complex on April 28, and she has already been accepted into the Columbia College Master of Arts in Teaching program. She hopes to get her certification to teach in art and Spanish, in which she is fluent. She has been speaking Spanish since she was 12.

“It’s kind of like a lawnmower: You have to pull a few times to get it started, but once it goes, it goes,” she said, with a laugh. “I had some really great teachers (at Hickman High School) that were native speakers and really helped me not just see it as a language, but in the cultural aspect. It’s just been a part of my life.”

Thompson put that fluency to good use during a nearly two-month trip to Peru and Ecuador last spring. She did a Study Abroad tour to Peru through Columbia College, then did volunteer work at a home for vulnerable women in Ecuador.

She also found time to indulge her artistic side, taking in the breathtaking scenery of the Andean Mountains in both countries and going to an exhibition by the Bolivian artist Jose Rodriguez Sanchez.

She filled her travel journal cover to cover.

“It’s really important to respect and learn about other people, to learn to speak their language, think the way they do,” Thompson said. “I think we make a lot of surface judgments about other people, and we live in a very polarized time. But when you actually live with someone and learn how and why they do things, it’s a lot harder to judge them and a lot easier to see the human being you’re living with.”