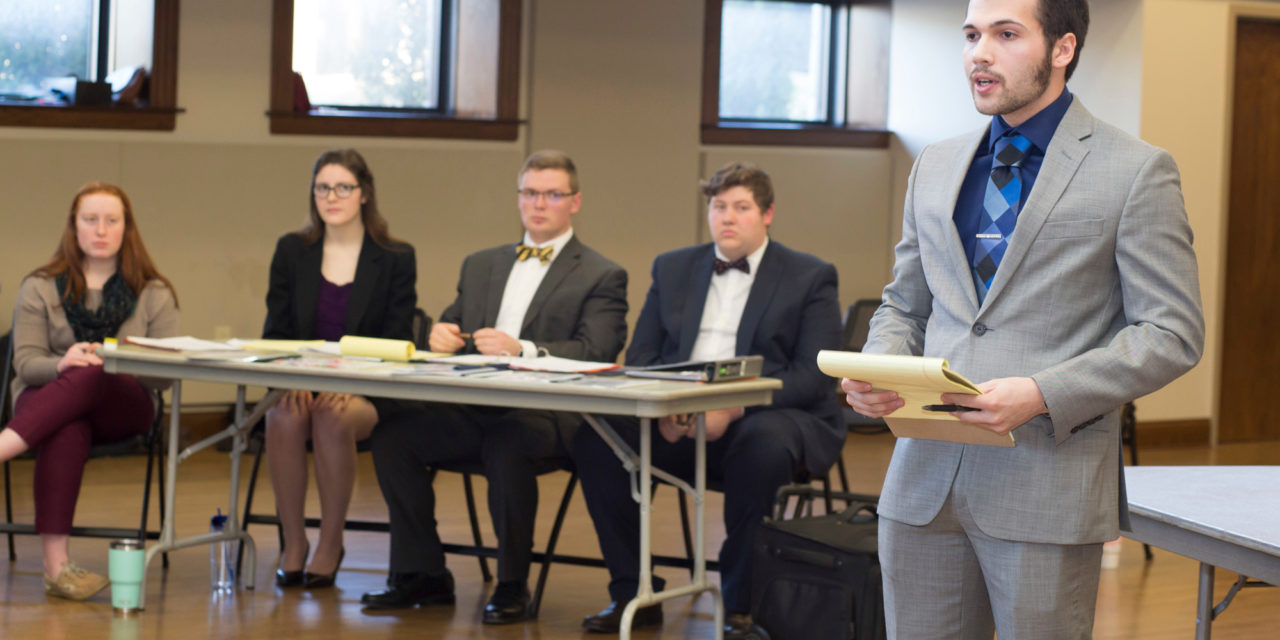 Carey and Carmen are having problems with their marriage. 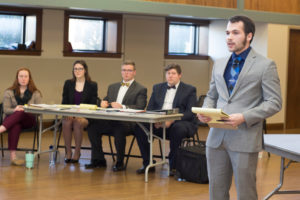 Carmen wanted to get his hands on the money tied up in Carey’s life insurance policy. As a result, he enlisted the woman with whom he’s having an affair, Dylan, to kill his wife. Dylan tried to strangle, Carey, but Carey survived.

Now, Dylan is on trial for attempted murder. The case seems fairly simple. Or does it?

What about the mind-altering drugs Carey ingested the night of the attempted murder? What about Carey’s friend, Morgan, who had keys to Carey’s apartment and was standing over Carey when she regained consciousness following the attempt on her life?

What really happened that night?

This is the case the eight members of the Columbia College Mock Trial team argued all year, against their counterparts from other schools. In the span of each competition, they would play both prosecution and defense, poring through the case file provided to all the participants by the American Mock Trial Association to find ways to either exonerate Dylan or send her to jail.

At the exhibition recruitment event the mock trial team held in Dorsey Gym this March, Easton Banik, Emily Holt and Landon Miller all played the part of prosecuting attorneys, while Leah Hoveln, Claire Petsinger and Erin Weaver played their witnesses.

Eric Levine was all by himself on defense.

“We’re a fairly small team, so a lot of us are double-roled,” said Miller, the club’s vice president. “Some of us only have a role on one side of the case, but I’m an attorney on prosecution and defense. Eric has been a witness on prosecution and a defense attorney, a prosecution attorney. All sorts of stuff.”

Even with such a small team, Columbia College holds its own against bigger schools. More than that, its representatives are frequent faces during the awards ceremonies that wrap up each tournament. 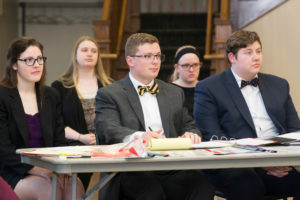 This season, Holt, the club president, won an “outstanding attorney” award at the regional tournament, and Hoveln and Weaver both earned multiple “outstanding witness” honors throughout the year. Miller took a perfect score as a defense attorney twice and also took home an “outstanding attorney” award on the prosecution side. The team also took home the Spirit of AMTA Award at four of the five tournaments in which it competed this year and earned honorable mention at the other.

University of Missouri School of Law Dean Lyrissa Lidsky was on the dais as Miller accepted his prosecuting attorney award. He will be studying law at Missouri this fall.

“That’s actually kind of what helped me get into Mizzou,” Miller said.

Barry Langford, associate professor and chair of the Columbia College Criminal Justice Administration program, is the mock trial sponsor at the school. He says the team’s quality has grown exponentially in the past 15 years.

The team draws people from all kinds of majors, because it speaks to a number of different interests and sharpens a variety of skills. Critical thinking helps you pick out the most crucial parts of the case materials. Public speaking helps get your point across in open court. Improvisation helps you react on the fly to objections from opposing attorneys or, if you’re a witness, curveball questions.

They’re just the sorts of things that make for a well-rounded law school candidate.

“We’ve actually gone to mock trial competitions at the law school level and sat in the crowd like, ‘We can beat these guys,’” said Levine, who has been accepted to the Case Western Reserve School of Law in Ohio, though he’s keeping his options open. “The program here is really good.”

Levine hopes to be an appellate litigant someday. Miller is interested in pursuing business law, even though he’s currently serving an internship in criminal defense at the Faber Law Firm in Columbia. Holt hopes to be accepted to the University of Calgary Law School in Canada, and she doesn’t yet know what sort of career she’d like to pursue.

She’s a philosophy major. Her father’s a lawyer. Her eyes used to glaze over when he started talking shop.

“It was super boring. I also kind of had the Law and Order image of it always being really intense,” Holt said. “That’s not really what it is at all. Honestly, I don’t think I would have been turned on to law school if I hadn’t joined mock trial. There are so many different things you can do with a law degree.” 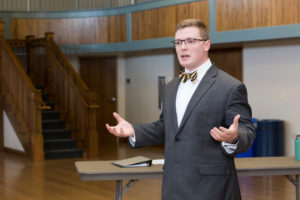 Senior Landon Miller plans to enroll at the University of Missouri School of Law in the fall.
(Photo by Kaci Smart)

Holt’s favorite part of her time with the club was the camaraderie she felt with the rest of her team members. After arguing the case against Dylan, Miller took a straw poll of the spectators in Dorsey Gym to see how many thought she was guilty.

Not many hands shot up. Levine had introduced reasonable doubt. He pumped his first. Miller smiled and gave him a high five.

“It’s high stress, but we also know how to let loose and be silly,” Holt said. “I’ve made friends with people, but also connections. It has just opened up doors for me that I didn’t even realize were there.”