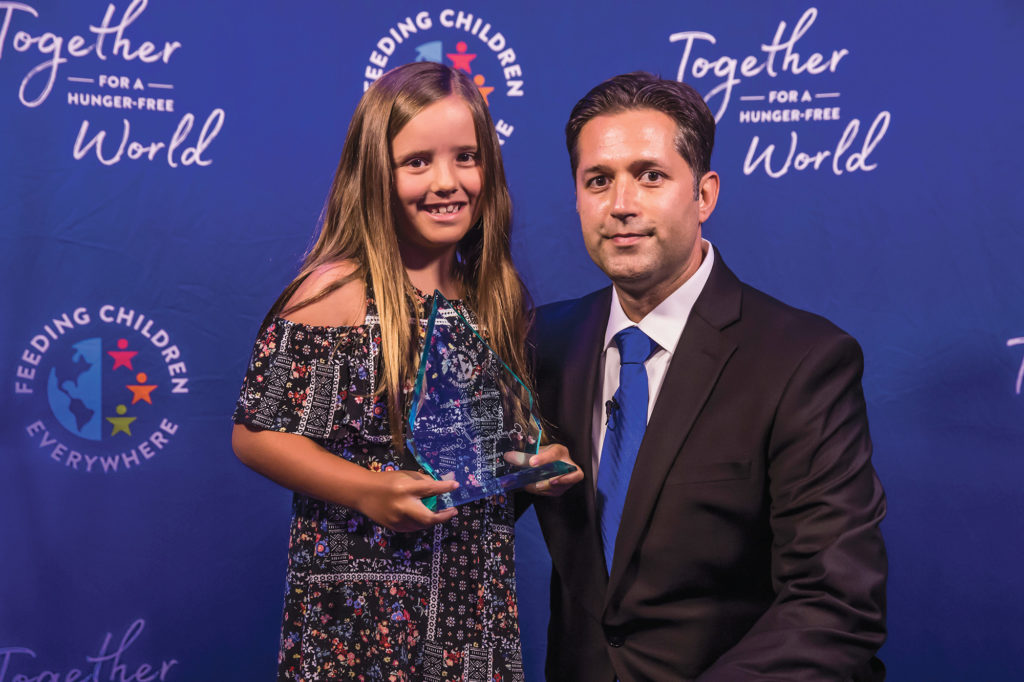 A graduate of Columbia College-Orlando, Green is the chief executive officer of Feeding Children Everywhere, an organization based in Central Florida that seeks to provide healthy meals for those in need. The food production apparatus of Feeding Children Everywhere had already sprang into action twice earlier in the year, sending meals to those affected by hurricanes in Texas and Florida.

The situation in Puerto Rico, though, required something even more comprehensive. It required 54,000 volunteers working over the span of 19 days to package and send food to the ailing US territory. In the end, Feeding Children Everywhere sent 4.4 million meals to the island.

“When there’s a disaster, because we have this platform and we’re able to produce a large amount of food in a short period of time, we try as much as possible to respond and get food to people who need it most,” Green says. “[After Hurricane Maria], we did one of the largest volunteer projects in the history of the US.”

For his efforts, Green earned the Central Floridian of the Year award from the Orlando Sentinel in January. The newspaper sorted through hundreds of nominations before paring the list down to five finalists, then the editorial board interviewed each of the finalists and chose the winner. Green is appreciative of the honor. He also knows he didn’t do it by himself.

“You work hard and try to do what you can to make a difference,” Green says. “There are thousands of people who make Feeding Children Everywhere what it is, from the volunteers to partners to our staff, our interns. To be recognized for that effort as a singular person, it was quite an overwhelming and humbling experience.”

Green is worlds away from where he was a decade ago. In 2008, he quit his job, gave away everything he owned and hiked the Pacific Crest Trail, a mountainous path that runs nearly 3,000 miles from Mexico to Canada, via California, Oregon and Washington.

He came to an important realization during all that hiking. “The thing that I really learned about myself while I was out there was that, if I was ever really going to be satisfied or fulfilled in my life, then my life needed to be about serving others,” Green says.

When he finished his trip, Green got a job in the tech industry while he looked for an opportunity for fulfillment. He enrolled at Columbia College to get his degree in computer science but switched to business administration after a semester. He had first started college in the 1990s but never finished.

“It was just kind of bothering me. I just felt like for me to reach my potential, that I needed to go back and finish school,” Green says. While attending Columbia College, Green joined Feeding Children Everywhere as its chief operating officer. Two years ago, he was named CEO. In that time, Green has made it his mission to streamline access to food for people in need. Last year, Feeding Children Everywhere launched the “Fed 40” program, where qualifying applicants can receive 40 meal servings.

“FedConnect,” another aspect of the Fed 40 program, provides applicants with opportunities for help in areas such as job skills, computer skills and English as a second language training. FedConnect also launched an entrepreneurship pilot program for applicants who want to start their own small businesses. Green says that more than 60 percent of the organization’s Fed 40 recipients are also taking advantage of FedConnect.

“They’re things that are basically going to create self-sufficiency in somebody’s life, to help them out of whatever they’re in right now,” Green says.

Feeding Children Everywhere has recently expanded, establishing regional warehouses in Salt Lake City and Chicago to serve different areas of the country. Green hopes that, in five years, the Fed 40 program will be available in every state, and FedConnect’s small business assistance will be the largest entrepreneurship program in the country.

He gained clarity through that cross country hike. He gained the knowhow at Columbia College.

“It taught me to look at situations, problem-solve and to be able to look at the health of a business in general, and look for opportunities to improve, look for things that need to be adjusted or could probably be fine-tuned to be more efficient,” Green says. “All those things have been very important to me over the last couple of years.”