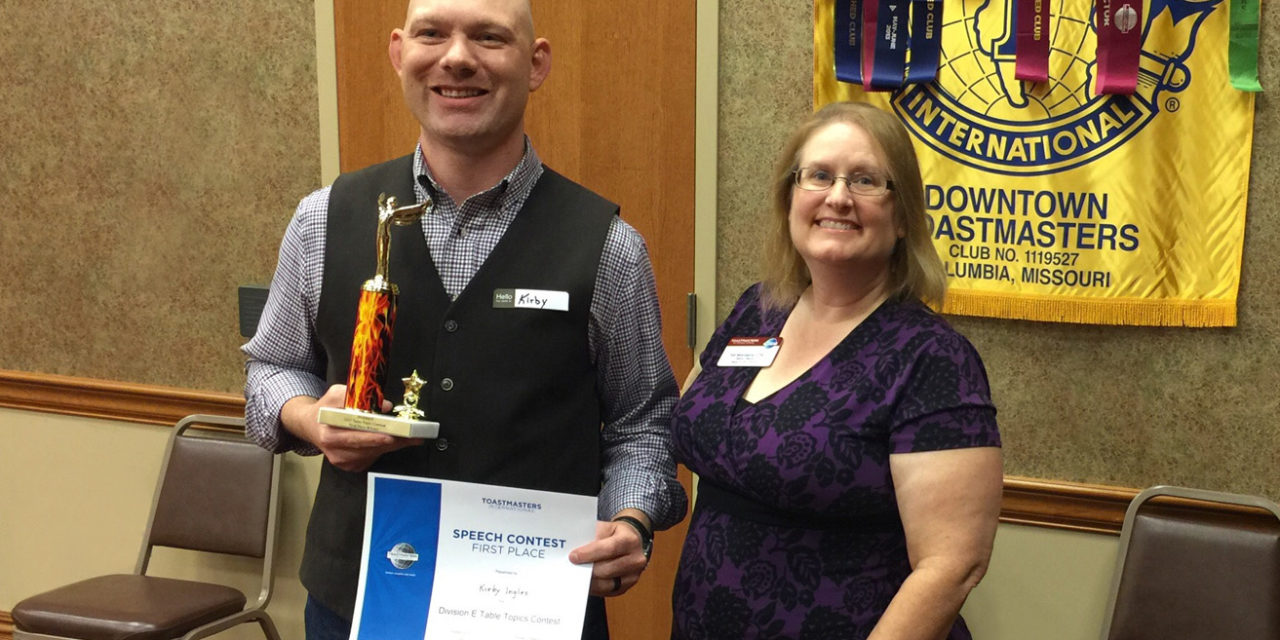 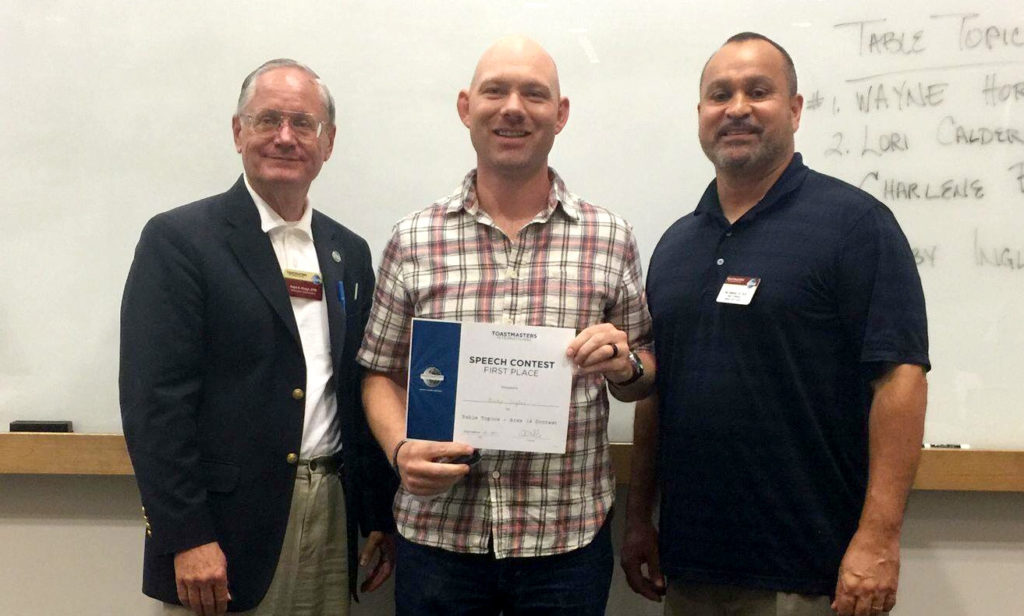 Kirby Ingles, center, competed in his first Toastmasters area competition in 2017, where he received top honors from division representatives.

“I was surprised when I won the area level and then excited to win the division level,” he said.

Ingles served nearly 20 years in the Army before pursuing a college education. While still serving his country, he completed three degrees with the financial support of the Army’s Tuition Assistance program.

Ingles earned an associates degree in 2007 from Barton County Community College in Great Bend, Kansas, and a bachelor’s degree in Interdisciplinary Studies in 2014 through Columbia College Online Education. He continued his studies while stationed in the Washington, D.C., area to earn a master’s degree in Counseling with a focus in life coaching from Liberty University in 2016.

“I have served in numerous leadership positions in the military across the world, equipping Human Resources and executive-level leaders to achieve higher performance while leading and growing their teams,” Ingles said.

Each year, more than 30,000 contestants participate in six areas of Toastmasters contests. Competitions begin at the club level, progressing to area, division and district levels.

At the Table Topics competition, all contestants are asked the same question and given 1 to 2 1/2 minutes for their response. Judges are seated anonymously across the audience. Here, Ingles was asked to explain why he would want to be an athlete, musician or artist.

He spoke about his childhood love of baseball that led to an umpiring career during high school and returning as an adult to officiate high school student athletes from 2014-2016. Learning the sport from the umpire’s point-of-view has given Ingles a deeper appreciation for the game.

Ingles advanced to the division level, where we once again took home an award, and finally rounded out the district competition by telling a joke – well, trying to tell a joke.

“I actually admitted that I wasn’t a funny guy but quite deliberate, direct and driven in my life,” he said. “The joke was on me that night as I stood up there and floundered a bit. It was the hardest question I had been asked, so the lesson of the night for me was to always carry a joke in my back pocket.”

Despite that hiccup, Ingles finished the district competition in the top five out of more than 2,200 Toastmasters.

“Winning the competitions at the local level helped me gain a lot of confidence and momentum, which has led to me being offered more speaking engagements,” Ingles said. “It’s been a win-win. This is an extracurricular activity for me and was just a way to personally and professionally grow.”

Toastmasters International has more than 352,000 members and 16,400 clubs around the world. The club’s mission is to “provide a supportive and positive learning experience in which members are empowered to develop communication and leadership skills, resulting in greater self-confidence and personal growth.”

While he does not plan to compete this fall, Ingles is busy in several leadership roles within the organization. This spring he was named the Area 14 director, overseeing five clubs in south central Missouri and will serve on the District Executive Committee, supporting club membership and educational achievements.

“A Toastmasters community club is like any other,” he said. “Without a positive, safe climate that allows for feedback and opportunity for growth, you are limiting yourself to what can be accomplished.”