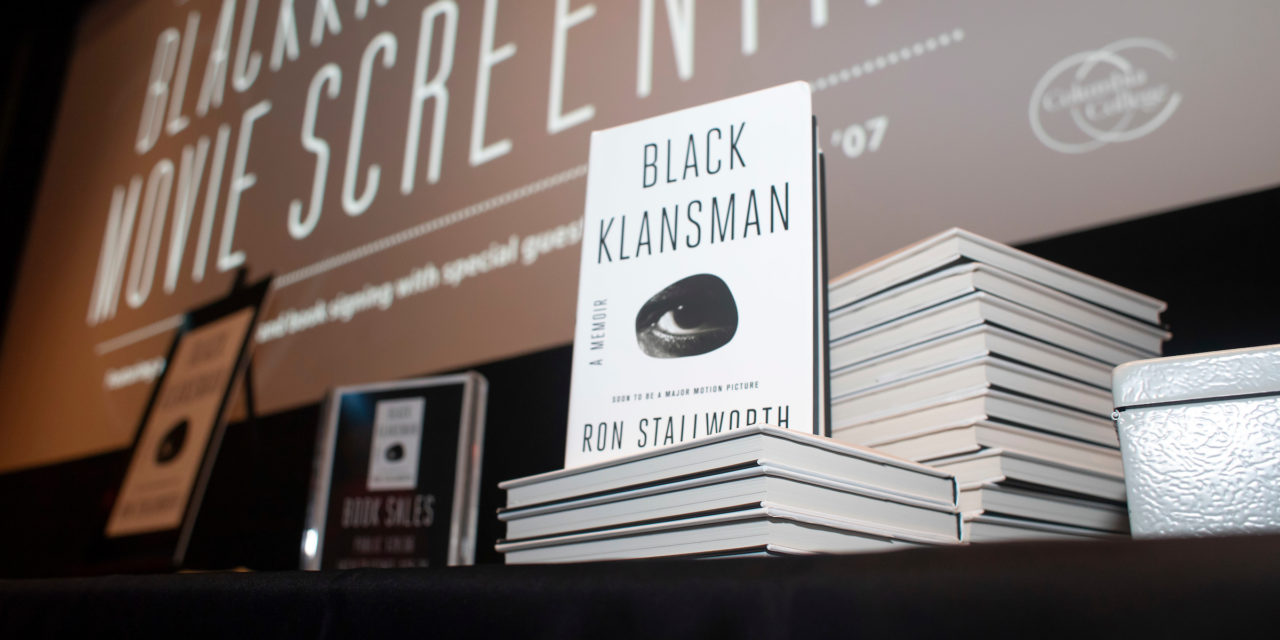 This past Thursday, Ron Stallworth ’07 was in Columbia for the first time since the re-release of his memoir, “Black Klansman”, and the worldwide premiere of Spike Lee’s cinematic adaptation of that memoir, “BlacKkKlansman”. The book has spent time on the New York Times bestseller list since its re-release in June, and the movie has the fourth-highest gross sales in the country since its release on Aug. 10. It’s also the fourth-highest-grossing movie of Lee’s four-decade career.

Earlier this summer, as part of our profile in Affinity magazine, Ron said, “My wife and I have made a commitment that there will be no sense of celebrity with us,” Stallworth said. “We’re not going to get caught up in the hype of what’s happening to us. It’s nice. We enjoy it. But we have a very simple, humble life. We have no intentions of becoming Hollywood celebrities or playing that scene. We just refuse to let it happen.”

He’s had plenty of opportunity, yet has stayed true to his word. Stallworth, a 2005 and 2007 graduate of Columbia College-Salt Lake, was back in Columbia for a special screening of “BlacKkKlansman” at Ragtag Cinema. Prior to the screening, Stallworth looked back on the whirlwind that has encompassed him and his wife, Patsy, over the last several weeks to promote both the movie and the re-release of his book. Stallworth has appeared all over the country, and has lived a star’s lifestyle during the tour.

“One night we were in Hollywood, and I go to the front desk and the guy says, ‘may I get you a taxi, sir?’ I said, ‘no, my limo is waiting for me.’ That was very much fun,” said Stallworth. “But my wife and I are determined that this will not change us. We’re just two kids from the streets of El Paso, Texas, that good fortune has fallen upon us, and we’ll ride this wave of good fortune for long as we can. When all is said and done, we’ll leave our $600-a-night hotel, we’ll leave our chauffeur-driven limousine, and we’ll go back to our little casita in El Paso.”

“WHEREAS Columbia College in Columbia, Missouri, has a tradition of providing quality education and access to traditional and non-traditional students nationwide;

AND WHEREAS Columbia College supports more than 35 locations across the country and through its online education program;

AND WHEREAS Ron Stallworth is a 2007 graduate of the Columbia College-Salt Lake, Utah, location, with a bachelor’s degree in criminal justice administration, and established the Ron and Micki Stallworth Criminal Justice Endowed Scholarship for deserving Columbia College students;

AND WHEREAS Ron Stallworth began his 32-year law-enforcement career in 1974 in the city of Colorado Springs, Colorado, working as a uniformed patrolman, an undercover investigator in vice, criminal intelligence, organized crime, narcotics, and criminal street gangs, retiring as a nationally renowned criminal justice expert;

AND WHEREAS the Columbia College Alumni Association bestowed upon Ron Stallworth its Community Service Award in 2010;

AND WHEREAS Ron Stallworth wrote the memoir “Black Klansman”, which became a major motion picture, “BlacKkKlansman, that was released to a nationwide audience on August 10, 2018;

AND WHEREAS Ron Stallworth returned to his alma mater, Columbia College, on August 30, 2018, to speak to the community about his memoir and journey, and was presented the Columbia College Lifetime Achievement Award (sic),

Earlier in the day, Stallworth met with the media to reflect on his life in law enforcement, as well as the circumstances that brought him to Columbia College-Salt Lake. Stallworth’s educational story sounds like many Columbia College grads: While he was wrapping up his law-enforcement career, he decided to return to school to fulfill a promise to his late wife, Micki, to earn his degree. He started classes at another institution that caters to non-traditional students, but because of their group-project structure, didn’t find a good fit.

“I dropped out three or four years before I learned of Columbia College; I looked into it and enrolled in the Salt Lake campus. Some of the instructors were people that I knew in the law-enforcement community who had their advanced degrees and were teachers; I enjoyed that, and it was just a pleasant learning experience for me.

“I felt like I fit in perfectly, because everybody that was attending college at Columbia were all working professionals like me. I liked their structure better, the small class sizes and the accelerated course program. I don’t recall anybody in the classes that I took that was fresh out of high school, in college for the first time. We were all in the same plane.”

Stallworth also explained what caused him to give back to his alma mater by creating the Ron and Micki Stallworth Endowed Scholarship. “That was in honor of my late wife. I wanted to honor her memory because I was a criminal justice student, a law-enforcement officer for 32 years, and I wanted to do something to recognize both her and my career. I happened to have some money at the time, and decided to put some of that to use by endowing the scholarship program.” [To make a gift to support the Stallworth Endowed Scholarship, please visit my.ccis.edu/givenow.]

Thursday night’s festivities began with a 20-minute question-and-answer session with the author, who debunked several of the cinematic embellishments that never took place in real life. Among them: There was never a love interest in real life; in his memoir, he mentioned that he hesitated going out to a nightclub because of the woman he was seeing at the time, who would eventually become his now-late wife, Micki. Also, while there was a plot to bomb two gay bars in the area, as well as steal munitions from nearby Fort Carson, the real-life investigation was able to thwart terrorist plots before they ever took place. Stallworth also revealed that he wished Spike Lee would have spent more time on the scene in which he served a special assignment to serve as the bodyguard for David Duke, then the grand wizard of the Ku Klux Klan, visited Colorado Springs.

Rev. Clyde Ruffin, the city council member who represents the 1st Ward in which both Columbia College and Ragtag reside, presented Ron with a proclamation from Columbia Mayor Brian Treece.

Following that, Columbia College president Dr. Scott Dalrymple surprised Stallworth by making him the first-ever recipient of the college’s Lifetime Achievement Award. Of all the accolades Stallworth has received over a stellar law-enforcement career and the fame from a bestselling book and movie, that news prompted a moment of emotion. “I’m overwhelmed, I really am,” he said.

Before the lights dimmed, Stallworth had a final few words of wisdom for the night’s audience: “What I do want you to take away from this movie is the willingness to have a discussion on the subject of race in this country in your own lives. Each of you should be able to look to (the person to) the left and right of you, have a discussion with them, and not be overly sensitive to the fact that you’re having this conversation. You should be able to agree to disagree, and yet not be offended by that disagreement. But at least be willing to talk about it. That’s what’s missing in this country.” 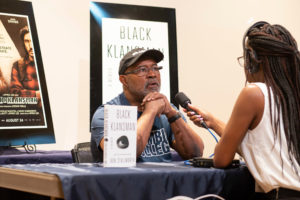 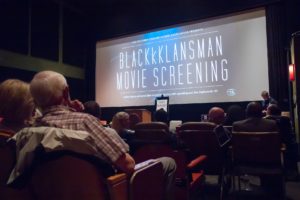 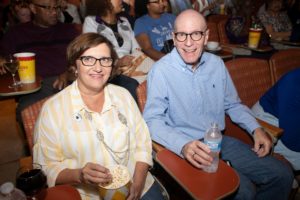 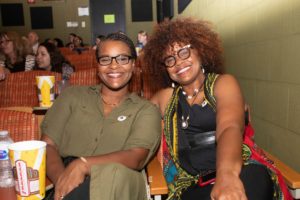 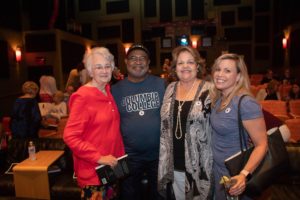 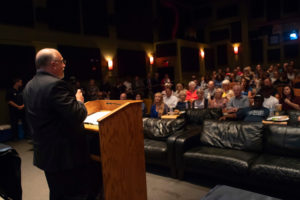 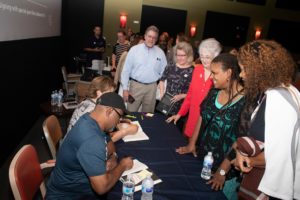 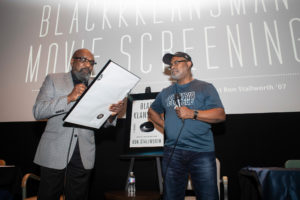 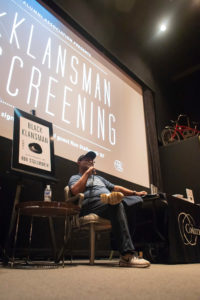 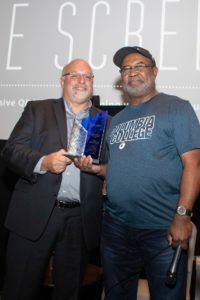