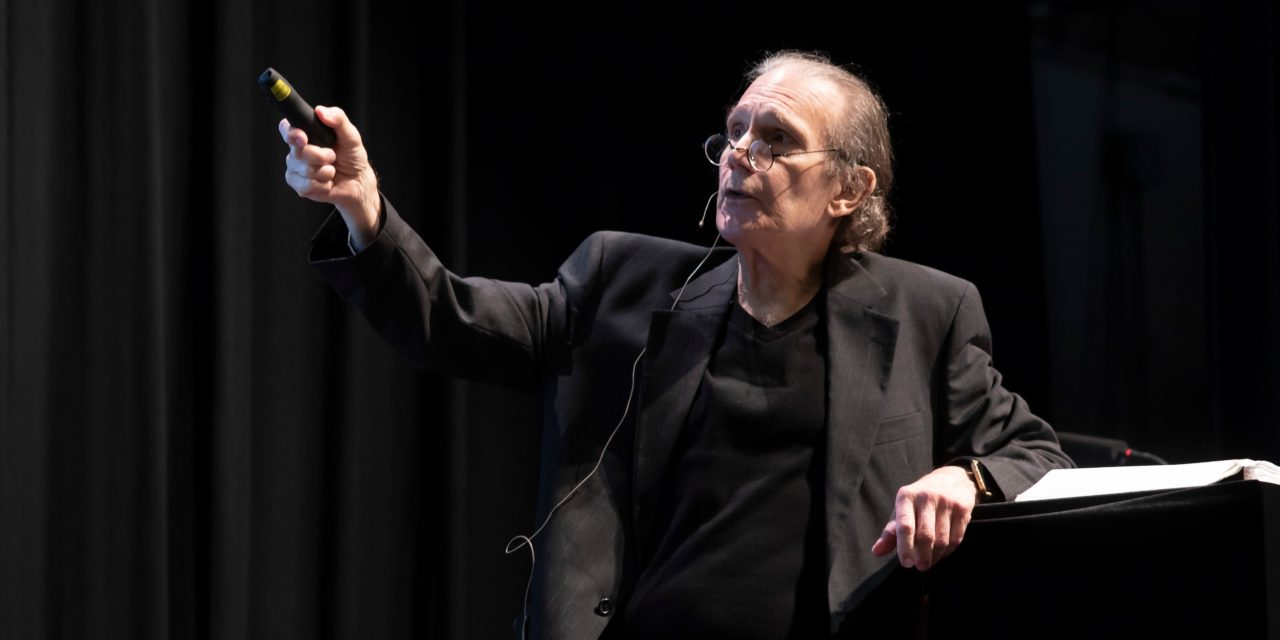 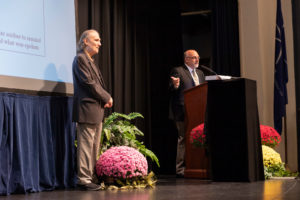 “If there’s anything I can do, just let me know.”

Those were the words Dr. Anthony Alioto had for President Dr. Scott Dalrymple as the two said their goodbyes this past April following the professor’s retirement from an impressive 37-year tenure at Columbia College, including the last 16 as the first John Schiffman Endowed Chair in Ethics, Philosophy and Religious Studies.

As he recounted the story last Tuesday morning in Launer Auditorium, to present the 17th Althea W. and John A. Schiffman Lecture in Religious Studies, the Vietnam veteran wryly remarked, “this is the second time in my life I’ve been drafted,” as he returned to campus to make good on his offer

His lecture, “Genesis: The Science and Art of Biblical Scholarship,” was a continuation of the scholarly work for which he was revered during his tenure at Columbia College.

Dr. Lisa Ford-Brown, interim dean of the School of Humanities, Arts, & Social Sciences, introduced Alioto at the lecture. “It was my honor for almost 17 years to have the office across from his, and witness his connection with countless students and colleagues. No one entered Tony’s classroom, office or conversation in the hallway without leaving enlightened and changed in some significant way.”

Because of that lasting impact on the college, at the conclusion of the lecture, Dr. Dalrymple was pleased to inform Dr. Alioto that, at its most-recent meeting, the Columbia College Board of Trustees unanimously appointed Dr. Alioto professor emeritus of Columbia College.

Retirement has done nothing to slow his pace; he continues to work on writing projects, though his focus has shifted. “Now I’m working on children’s books, corrupting little kids,” he says with a smile. He also continues to work with his son, Luciano, who is a graphic artist.

“I’m a lot busier. I need to study this, I study that, I give a lot of talks. There’s no question about staying busy.

“I just take the day as it comes,” he says of life after teaching. “And that’s what’s fun about it; I don’t have any set thing. The only thing is at least I try to get a couple pages written every day.”

The lecture series began in 2002, and along with its companion Ethics in Society Lecture each Spring, fulfills the mission set forth by John Schiffman’s $1.5 million gift to the college in 2000 to establish, in honor of his wife, an endowed chair in ethics, religious studies and philosophy. Dr. Alioto is the only person to serve as chair since its inception, carrying out the vision of the Schiffman family, bringing noted speakers to campus two times a year for lectures focused on Religious Studies and Ethics in Society.

These showcases were designed to not only enhance a student’s educational experience, but also bring about the conversation of what roles ethics, religion and moral development play as part of an individual’s path in life.

Last week was Alioto’s second time lecturing as part of the Schiffman series, but first as a solo lecturer; he was joined by John McHale in 2014 to speak about the book they co-wrote, “Saintly Sex: Saint John Paul II, sex, Gender & the Catholic Church.”

Before heading to Dulany Hall for a book signing that followed the lecture, Alioto reflected on his time at Columbia College.

“Whenever I was in the classroom, I gotta say, those were favorite times,” he said. “You look back at 37 years, all the people you’ve known, and the students you’ve had… I wouldn’t trade it for anything.”