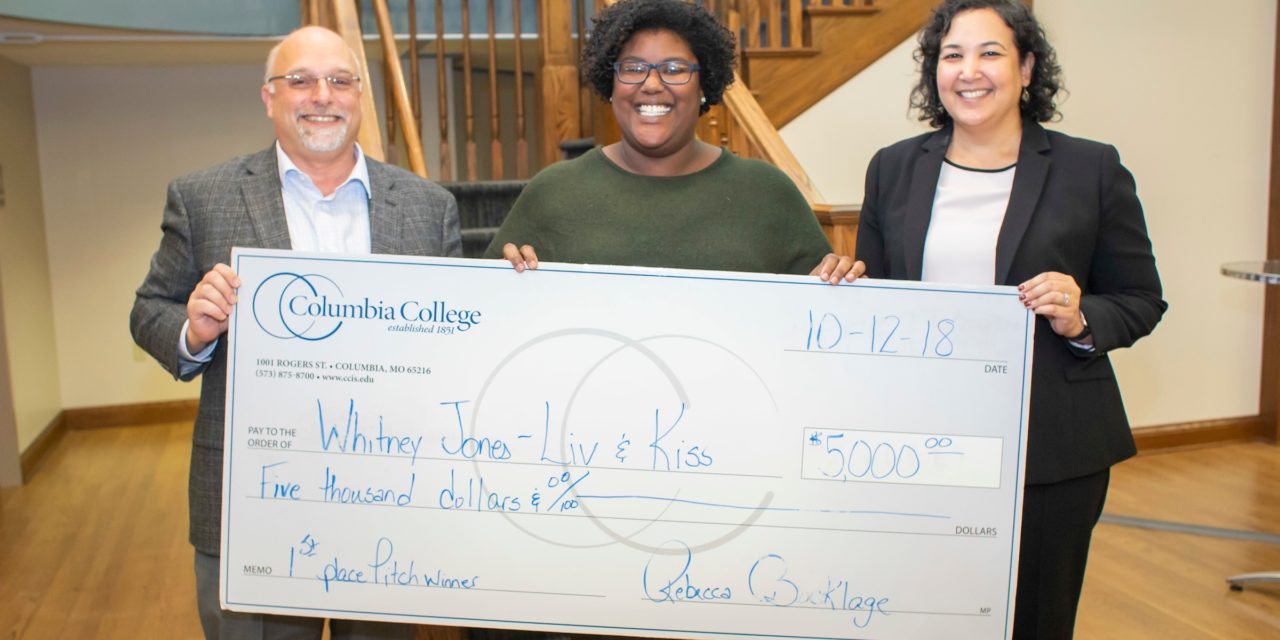 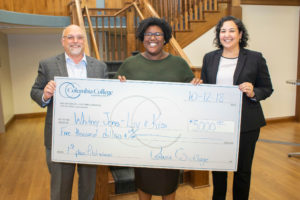 Mark Cuban wasn’t there to propose an equity stake in their companies, but the bright lights of Bixby Lecture Hall on the Columbia College main campus served as a quasi-Shark Tank environment on Friday, Oct. 12, for the college’s annual Student Entrepreneurship Showcase Pitch Competition. Hosted by the Steven and Barbara Fishman Center for Entrepreneurship, the competition allows five students from various Columbia College locations the chance to win from a $9,000 prize pool.

This year, the five students hailed from St. Louis, Orlando, and the college’s Evening Campus, and featured a mix of students with previous pitch experience and new entrepreneurs.

Whitney Jones, who finished third in the competition two years ago, won the $5,000 first-place prize this year for pitching her two-year-old business, Liv & Kiss, a wholesale plus-sized women’s apparel line that was founded with the simplest of business notions.

“I was tired of going into stores, struggling to find things to wear. Being plus-sized, it’s always been hard,” Jones said.

Students were assisted by their business instructors at Columbia College, director of Fishman Center for Entrepreneurship Becky Bocklage, as well as by outside coaches that provided guidance leading up to the competition. Sara Cochran, Entrepreneurial Programs Manager for the University of Missouri System and an adjunct faculty member at MU’s Trulaske College of Business, served as Jones’ coach this year. Because they live in different cities, the pair took advantage of Skype and email to stay in touch.

“We talked through some of the challenges and questions she had as she worked through the different kind of elements of her business model and her pitch,” Cochran says. “I had seen part of her pitch last year, and so I knew the general sort of customer problem she’s trying to solve, but I didn’t have a lot of knowledge of how she was doing it.”

The $3,000 second-place prize went to another St. Louis student, Lamar Lockett. His startup is L-tre, a custom t-shirt design and production company that focuses on special life events such as birthdays, family and high-school reunions and graduations. It was Lockett’s first pitch experience.

“It was a roller-coaster ride, but with the practice and coaching we got, it really changed what I thought it would look like,” he said. “Their coaching helped me see how some things I wanted to convey wouldn’t go over well, and that helped me in the competition. So I edited a few things, but I was excited about it the whole way through.”

Third place, and $1,000, went to Nigisti HiSmith of the Orlando location. She is the founder of Pearls of Grace, a 501(c)(4) social-awareness non-profit focused on assisting children in adverse situations.

Erika Thomas, director of the St. Louis location, isn’t surprised at the growth of entrepreneurship among Columbia College students.

“I read an interesting statistic: It said roughly a third of millennials will try entrepreneurship in some capacity, and of that third, half of them will be successful,” says Thomas. “I have a school that’s pretty much full of millennials. We’re noticing that our entrepreneurship course that we offer – even though it’s not a core course to graduate – I have to offer it because people ask for it.”

Administrators also take advantage of the calendar: The St. Louis location’s entrepreneurship class is often offered in the spring, right before the deadline to enter the pitch competition. “Our teachers get students excited about entrepreneurship, and they enter right away,” she says.

Jones, who won the Columbia College-St. Louis pitch competition in 2016, impressed the judges with her efforts in continuing to secure deals with specific boutiques to carry her garments. She’s also close to finalizing a deal with a major retailer’s online portal.

For her part, while the win was satisfying for Jones, it’s not the end goal.

“It shows me that what I’m doing is worth it, but so does the fact that I have clients who say, ‘oh my God, thank you, I love this garment, it made me feel beautiful.’ Because at the end of the day, I want all my customers to feel beautiful,” Jones says. “It helps them accomplish all of their dreams. For me, yeah, profit is good, but that’s not it; it’s really about the customer. It’s not about the money; knowing that I helped somebody feel better about themselves to tackle what’s on their list is what it’s really about.” 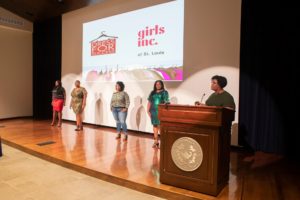 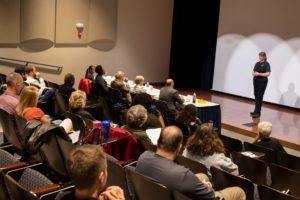 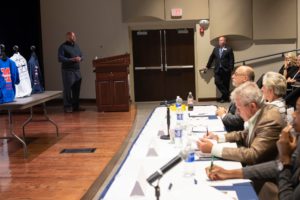 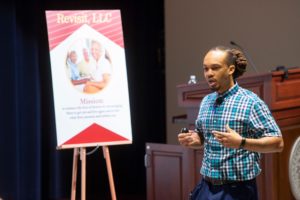 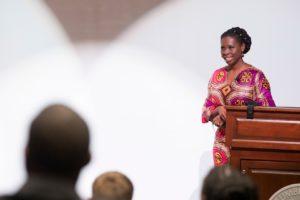 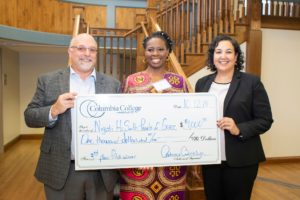 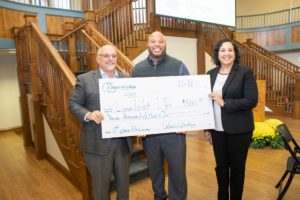