For Miller, it’s an honor to stand guard 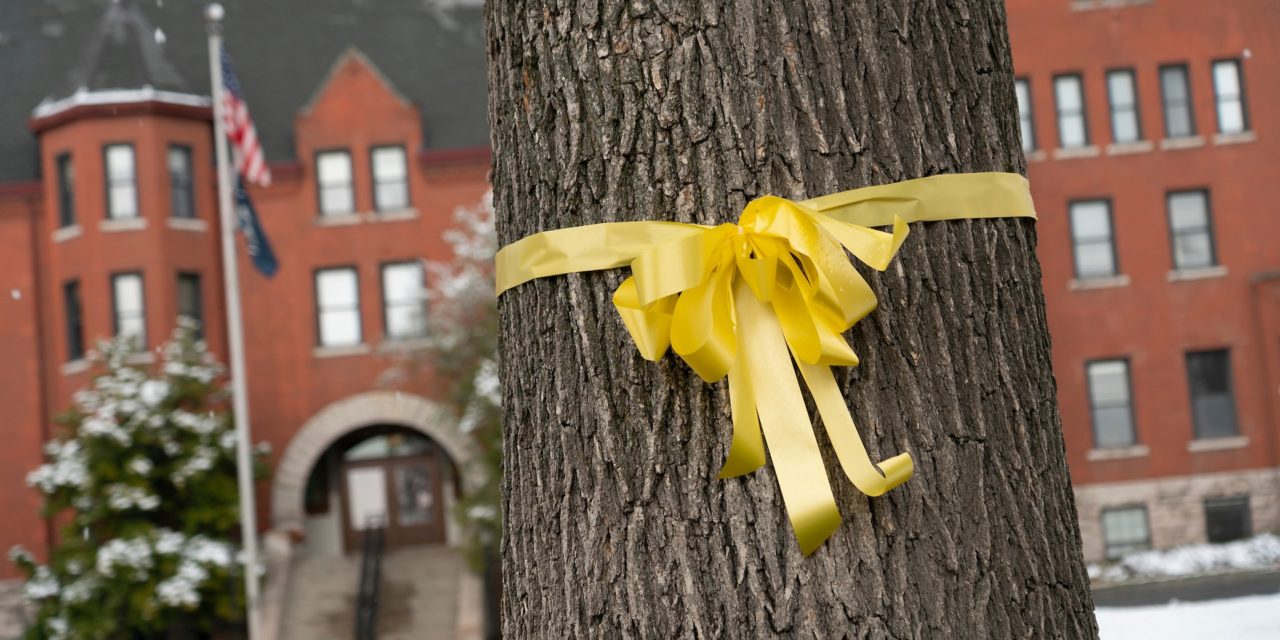 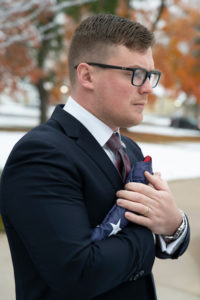 The scene, brightened by a fresh blanket of snow on Bass Commons from the night before, is a familiar one for Landon Miller ’18, who served on the color guard for last Friday’s ceremony. He recently completed four years in the Marine Corps Reserves, achieving the rank of lance corporal, and is a former president of the Columbia College Student Veterans (CCSV). “I’ve been on dang near every color guard there is,” he says, though this one had special meaning.

It was his first Veteran’s Week without his best friend, Andrew Helmreich, who passed away in an automobile accident on Oct. 20. Helmreich was an Army veteran, Miller’s vice president on CCSV, and was weeks away from earning his bachelor’s degree in business management from Columbia College. Miller, who graduated this past April and is now in his first year of law school at the University of Missouri, said the ceremony had special meaning this year.

“This morning hit a little bit harder,” said Miller. “Veteran’s Day is about the values that we hold dear, never leaving someone behind, looking out for your brother and sister on your left and your right, and now my brother on the right isn’t there anymore.” 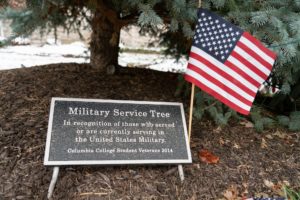 A lone flag next to the Military Service Tree plaque honors late Army veteran Andrew Helmreich, who was set to graduate next month.

Helmreich’s memory was honored throughout the week; on Monday, when staff volunteers inserted nearly 1,000 American flags around Main Campus, a larger flag to represent Helmreich was planted in front of the Military Service Tree next to Dorsey Hall. In addition, a moment of silence was held for Helmrich later Friday morning, before the National Roll Call remembrance ceremony in Atkins-Holman Student Center.

At that event, Associate Director of Alumni Relations Carolyn Preul read the names of the 30 American service members who were killed in the line of duty since last year’s Veterans Day ceremonies. Several Columbia College faculty and staff members then provided details on the five service members awarded the Medal of Honor in 2018 for “conspicuous gallantry and intrepidity at the risk of life above and beyond the call of duty.”

Earlier in the week, the Ousley Family Veterans Service Center partnered with staff from the Truman VA Hospital in Columbia to educate veterans on a new “Whole Health for Life” program that Veterans Affairs has initiated to help veterans achieve and maintain their best all-around health and well-being.

Friday morning, Dr. Piyusha Singh, provost and vice president for Academic Affairs, joined Director of Veterans Services Keith Glindemann in a ceremony commemorating the establishment of a scholarship endowed by the college’s chapter of SALUTE, the national honor society for student veterans.

“We are honored to be the first SALUTE chapter of more than 300 nationwide to offer a chapter scholarship,” said Glindemann. “We are also excited to both grow this scholarship endowment, while at the same time look for more opportunities to serve our students.”

The week of festivities honoring our nation’s veterans concluded Friday night outside Dorsey Hall, in front of the Military Service Tree. Before the tree became illuminated by red, white and blue lights, Associate Director of Evening Campus Bill Bushnell reminded those in attendance that Veterans Day was originally known as Armistice Day. This year’s Veterans Day marked the 100th anniversary of the conclusion of World War I.

“Let us never forget that we cannot rightfully celebrate the joy of our freedom without remembering the great price paid for that freedom,” said Bushnell, a graduate of the U.S. Naval Academy and veteran. “To all our veterans, I offer on behalf of the entire college community a heartfelt thank you for your sacrifices, for your sense of duty and for your unwavering service in times of peace and war.” 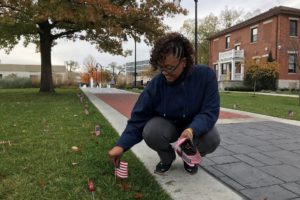 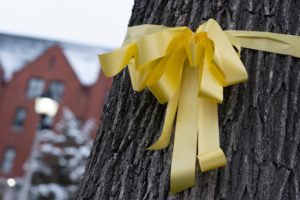 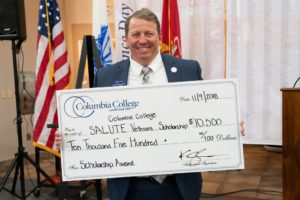 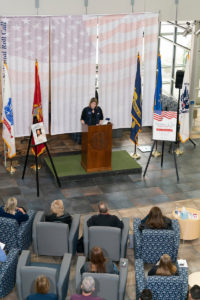 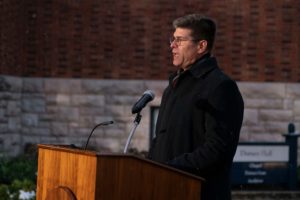 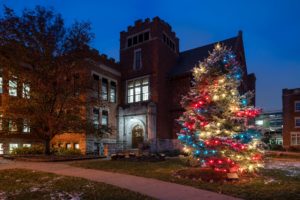