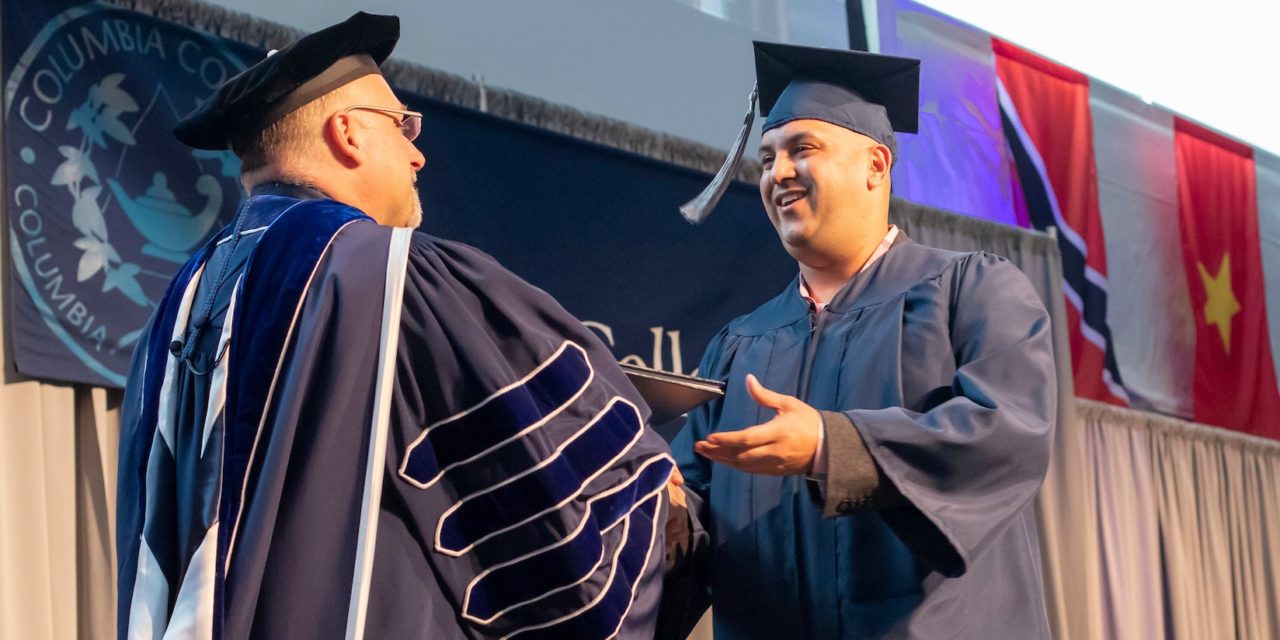 Each of Columbia College’s more than 20,000 students has a story all their own that led them in search of their degree. Last Saturday, the journeys of the 338 students who participated in the Fall 2018 commencement ceremony in Southwell Complex were celebrated by more than 2,500 family, friends and fans. In all, 29 of the college’s 36 locations were represented, with its graduates coming from the United States and six foreign countries including Canada, Mexico, Panama, Trinidad and Tobago, Vietnam and Zimbabwe. 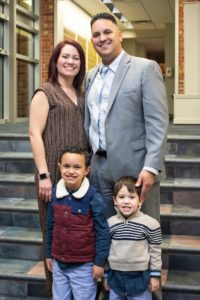 Among those celebrating this milestone were 24 students who earned their nurses’ pin, signifying completion of their Associate in Science in Nursing degree, in a ceremony Friday evening in Launer Auditorium. The president of the Fall 2018 nursing class, Pedro Surís, has a story that likely resonates with many Columbia College graduates.

Surís and his wife, Ludmila, found out six months after the 2012 birth of their son, Derek, that he would need surgery to repair some clotting issues around his organs. Since Surís’ family didn’t have insurance to cover the cost of the surgery in his native Puerto Rico, he enlisted in the Army Reserves.

When Derek was three years old, doctors said he was at the age to safely recover from the surgery, so Pedro flew home from Fort Belvoir for the successful surgery. After Hurricane Maria hit in the fall of 2017, he once again returned home to his hometown of Ponce. After being unable to find work in Puerto Rico, he moved his family to Jefferson City, where he had previously visited in-laws.

After working as an X-ray technician at Providence Urgent Care, he realized he wanted to work more directly with patients, which brought him to Columbia College. Now with his ASN in hand, he has already enrolled for this spring to work toward his Bachelor of Science in Nursing.

Pedro has another year of service remaining with the Army Reserves, and will deploy this March for an overseas training mission – most likely to El Salvador or Guatemala – for a 3-6-month stint. As the Columbia College BSN program is online, he’ll have fewer obstacles to completing his assignments.

“I’m so excited to move onto the next phase of my life,” Surís said following the pinning ceremony. “My classmates were a great support this year. We made it together as a group, and the people here at Columbia College were unbelievably supportive.”

Surís and his nursing classmates heard from keynote speaker Olivia Hopkins ’11, who is now a registered nurse practitioner and supervisor at a women’s health clinic in Wichita, Kansas, and teaches BSN classes online for Columbia College. She told the graduates of her many roadblocks during her studies, and how through sheer will and determination, earned associate, bachelor’s, and master’s degrees in nursing.

Saturday’s commencement speaker is another example of the inspiring alumni it produces every year. Travis Reynders enrolled at Columbia College in 2015 following a six-year enlistment with the Marines, where he served as an infantryman based out of Camp Pendleton. He deployed twice, to Japan and Australia, and earned the rank of Sergeant. He graduated from Columbia College with a Bachelor of General Studies degree and a minor in business in 2016, and immediately enrolled in graduate school while maintaining his day job, working for the Gary Sinise Foundation. Over the course of his time at Columbia College, he was awarded the Col. Mike Randerson Veteran’s Scholarship, was named to the SALUTE Veterans National Honor Society and Alpha Sigma Lambda Honors Society. On Saturday, Reynders earned his MBA from Columbia College. 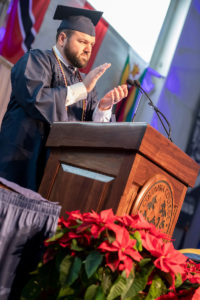 Travis Reynders thanks veterans of the Vietnam War during his remarks on Saturday.

Before beginning his remarks, Reynders took a cue from Columbia College President Dr. Scott Dalrymple’s opening remarks, when he invited various constituencies in the audience – parents, children, first-generation college graduates – to identify themselves. Reynders serves as a project coordinator for the RISE program, which builds custom smart homes for combat amputee veterans of the Iraq and Afghanistan wars across the country. He invited all Vietnam-era veterans to stand and be recognized by the crowd for their often-forgotten service decades ago.

“When I returned home from my deployments, countless Vietnam veterans lined the sidewalks and streets welcoming us home, ensuring we were not forgotten and that the country was grateful, gestures not allotted to them when they returned home,” Reynders said. “While there are not enough words to thank you for your tremendous service to our country, there are two words you should have all heard decades ago: ‘Welcome Home!’”

Reynders regaled the capacity crowd with his own personal comeback story. Faced with the prospect of being cut from the MBA program due to receiving a second “C” grade, he met with his advisor to go over his options, which included retaking the class. While certainly a setback, Reynders met the situation head-on and proceeded to reset his sights on graduation day.

“My quest for self-improvement through education became my driving force and my family my motivation. This is what we have in common,” Reynders said to his fellow graduates. “Education does not begin and end in a textbook. Our GPA’s, our personal awards, our work titles, our bank account totals, our résumés should not be what defines us because they will tell us nothing about the type of character we possess. True character is revealed in our reactions to adversity.”

Reynders closed his speech by recognizing his wife, Lyndsey, and son, Watson, as his motivation, legacy and passion in life. He then challenged his fellow graduates: “That is my ‘What’s next?’! What’s yours?” 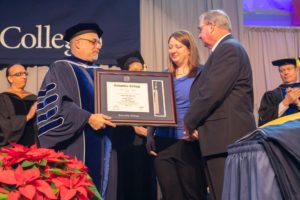 Dr. Dalrymple presents a frame with Andrew Helmreich’s degree and tassel to his sister and father.

An especially poignant moment in the ceremony came when Dr. Dalrymple honored one of the college’s fallen students, Andrew Helmreich ’18, who was killed in an automobile accident on Oct. 20. A veteran of the U.S. Army, Andrew served his country for five years, including a 2014 tour in Afghanistan. During his time at the college, he served as the vice president of the Columbia College Student Veterans, helping those who have also served acclimate back into civilian life through education.

At the time of his passing, Andrew was just one month away from completing his Bachelor of Science degree in Management and Human Resource Management. To honor his memory and recognize his achievement, Dr. Dalrymple presented Andrew’s degree posthumously to his father Donnie, sister, Lauren.

“Andrew will be remembered for his outgoing personality, commitment to his family and country, and his ability to make those around him laugh. He is deeply missed by our campus community, and we are proud to award him this degree today,” said Dr. Dalrymple.

The weekend’s 338 graduates are now lifetime members of the Columbia College Alumni Association, which boasts more than 89,000 members. One chapter of their story has been completed, but the next one is just beginning.