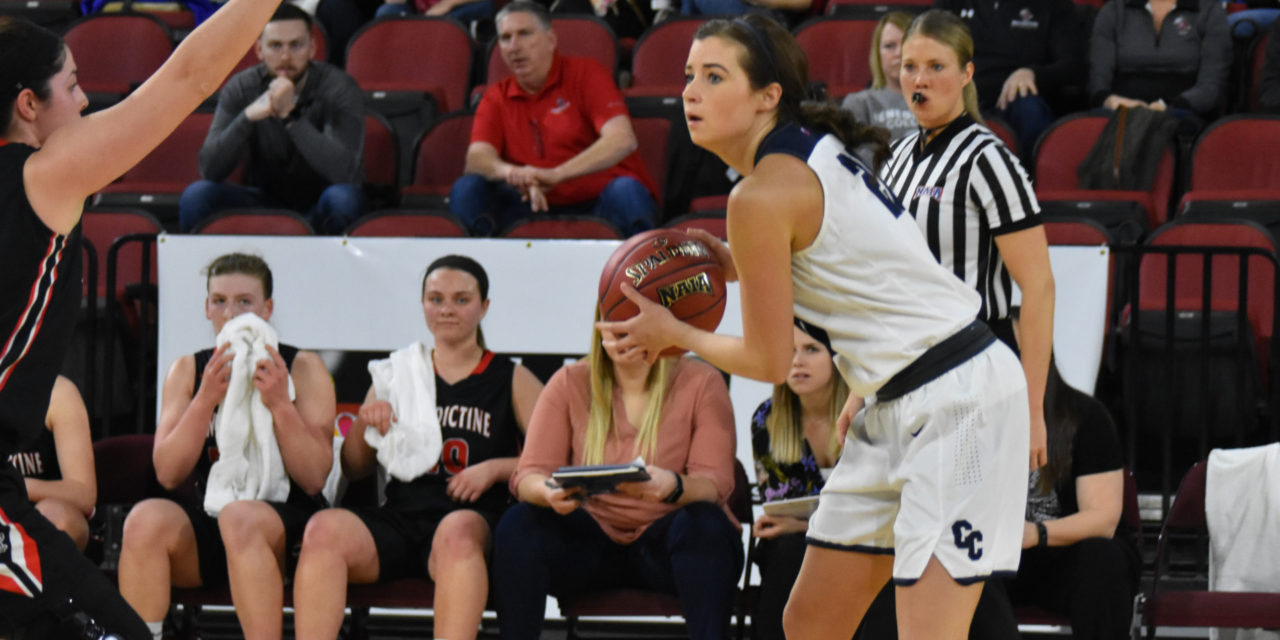 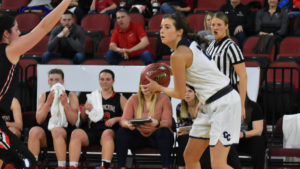 When she’s not lacing up her high-tops for the Cougars, Sarah Walters has her earbuds tuned into crime podcasts. [Photo by Cindy Fotti Potter ’05]

Growing up in the rolling hills of Cooper County – less than 15 miles, as the crow flies, from the Columbia College main campus, yet a good 30-minute drive backtracking across the Missouri River – Sarah Walters had what she describes as an “interesting” childhood. And as she has embarked upon her final season on the Cougar women’s basketball team – currently 8-1 and ranked No. 4 in the latest NAIA poll – she has it to thank for her solid work ethic.

“My dad is not a huge believer in sitting the kids on the couch and watching television,” she says. “He would take us to the library, we’d get books, he’d make us play outside; on occasion he would lock us out and be like, ‘You’re going to go play. Be active, you’re not sitting inside.’”

Looking back, Walters agrees these stricter rules helped her out in the long run. “Not having cable definitely shaped my study habits, reading so much and not being distracted by television. It’s really helped me in terms of my schoolwork.”

Despite her dad’s best intentions, Walter is still a product of the smartphone generation and confesses to needing a bit of social media detox last semester. That respite, though, spurred her on to listening to podcasts at her job, which sparked a newfound love: the criminal justice system.

In listening to series involving the solving of old crimes, Walters was hooked. “Hearing the process of how they investigate cold cases, and seeing what ends up being the clue that turns things around years later is intriguing to me.”

That, along with a constitutional law class taught by former dean Dr. David Roebuck, has Walters thinking of law school. “He did a great job of teaching,” she says. “I’ve already had other classes where they’ll bring up material from that class, and I’ve noticed how easily it comes back to me. I love when teachers are able to do that.”

Walters took the LSAT in November and is on track to graduate this spring with a degree in political science. If her timeline holds, in five years she’ll be serving as a public defender, en route to her dream job as a judge.

Still, whether it was playing at the YMCA as an 8-year-old, shooting outside with her dad, traveling with summer ball, high school or now in her final year of college, basketball has always been her first love.

“My parents weren’t ever going to pay for my college,” she says. “[My siblings and I] knew we were going to have to get a job or take out loans to pay for school, and my dad was always saying, ‘You know, this is something, if you really work hard at it you can get your school paid for,’ and so that was always the goal.

“I loved it and so I worked a lot really hard at it, and eventually they said, ‘She’s got the work ethic, she’s dedicated, she loves it… we can see this going somewhere.’”

She started playing on the Columbia Sparkz (now known as Mo Phenom) AAU team, which often had practices and games at Southwell Complex, so she had a familiarity with campus long before being recruited to play for the Cougars women’s basketball team. “Columbia College is perfect. It’s close to home, small, and I love the coaching staff. It’s just great.”

Walters is one of four seniors returning from last season’s 28-6 squad that won the American Midwest Conference title outright for the first time in seven seasons and advanced to the NAIA National Tournament. She’s also one of only four Cougars to play in every game last year.

“I’m really excited about this team because we already seem more focused, more dedicated and ready to go than really any of the other three years I’ve been here,” she says. “I’m definitely excited to see how far we can go.”