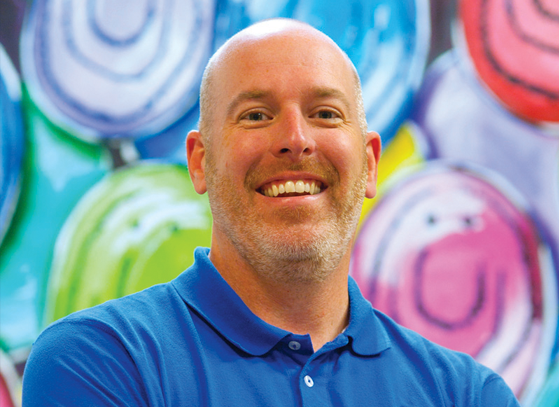 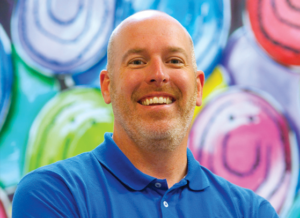 When Bill Elcan ’98 heard about a business idea to spread smiles all around the world, he knew he had to be a part of it.

It started with some leftover pieces of clay. An artist friend of Elcan’s, Mark Borella, wanted to sculpt something for a family whose son was diagnosed with cancer. He rolled bits of clay into smiley faces and painted them with bright, vibrant colors. Calling them “Seeds of Happiness,” Borella brought some over to the family.

“He told them, ‘There’s nothing I can say to make things better, but I made you some smiles to help you get your smile back one day,’” says Elcan. “The mom called later to tell him how much it meant to them, and he should do this for other people.”

Borella started keeping a jar of the clay smiles in his studio to give to people when they were having a rough day. Soon more and more people started requesting them and told him that he should sell them so everyone could share happiness.

In 2010, Borella asked Elcan to join him in building the business. It was perfect timing for Elcan, who was looking for a new job opportunity. After graduating with his degree in business management and marketing at Columbia College, Elcan got his MBA at Lindenwood University. He worked as a sales manager for Missouri Eagle, LLC, before he and his siblings bought Children’s Factory in Union, Missouri, where he handled the sales and marketing.

“I had always had in the back of my mind that I’d like to help start a business from the ground up,” Elcan says. “When Mark told me about the idea, I wanted to go along for the ride. It was a no-brainer for me.”

Elcan took charge of the numbers side of the business. He handles the marketing and sales, while Borella oversees the art process creating the seeds.

When they started out, Borella would hand roll each of the smiles. As they grew, they had to find ways to keep up with demand. They started partnering with Canterbury Enterprises, a sheltered workshop that employs people with disabilities in St. Louis. There, the workers smooth out the edges of the clay balls and help with glazing. Today, Seeds of Happiness has grown from selling at a few art shows to selling online as well as in 500 stores in 49 states.

Elcan says part of their growth is a result of social media, particularly Facebook, but also from word of mouth when people 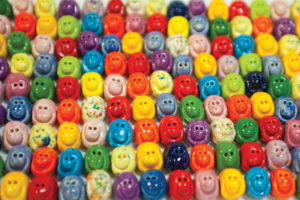 receive them as gifts. “If you have a bag of 10, you’ll probably give half away,” he says. “Those people will then buy smiles to share with their friends, and it will spread from there.”

Some customers’ stories have made a lasting impact on him. He remembers when a teenager told them her story – she had considered jumping off a bridge until a stranger handed her one of the smiles and asked if she was OK. “She went home and told her mom about the experience and wound up getting help for a chemical imbalance from a medication she was taking,” says Elcan. “She’s still here today because someone gave her a smile and show they cared.”

As an entrepreneur, Elcan says it’s been rewarding seeing the company grow from its humble beginnings to a successful business. He credits his Columbia College professors with teaching him the importance of being passionate about your work as well as the logistics of how to make a good business plan. “I remember one class in particular that talked about what you need to provide a bank in order to get a business loan,” he says. “It’s something that I still reference today.”

He also learned the importance of having a product that fits a need. With Seeds of Happiness, that need is especially important – finding ways to spread kindness.

“It’s a way to combat all the negativity in the world with a little piece of happiness,” he says. “It’s like getting a 3-D greeting card. It’s a nice way to tell somebody that you’re thinking of them.”