A legacy of uniqueness 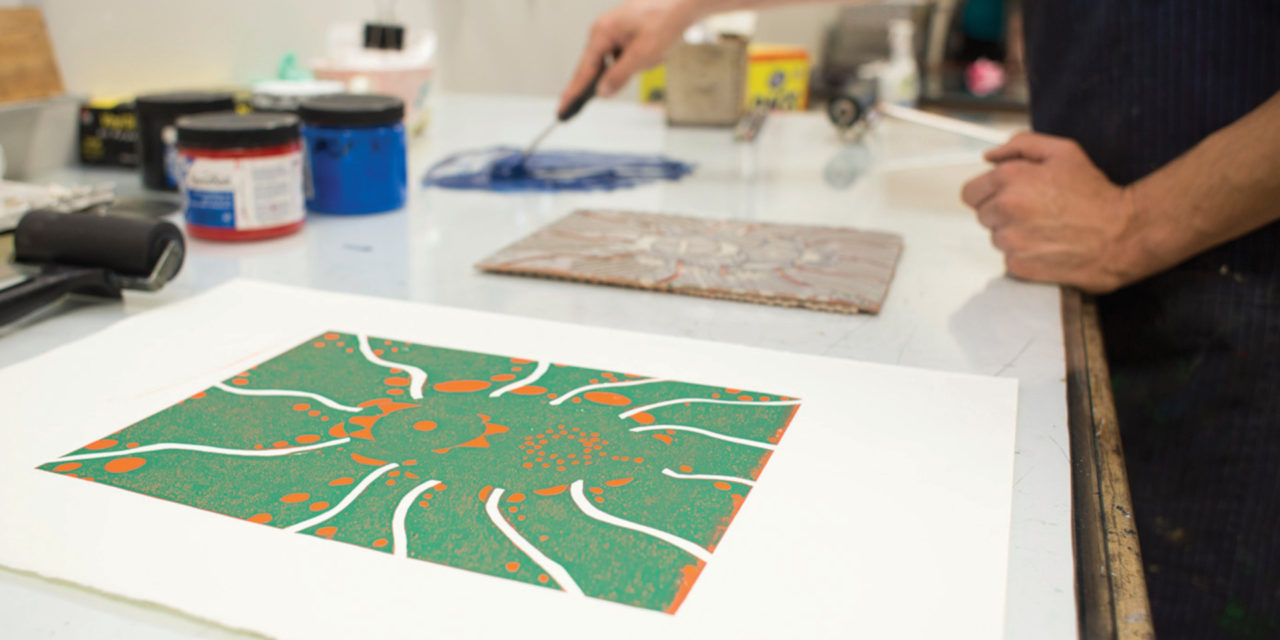 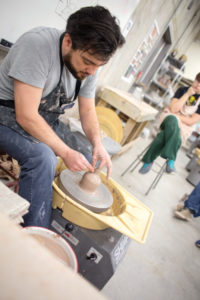 Unique, he said, because “they can be believed in and lived by. Somehow, in spite of human fallibility, there is distilled here a delicate essence of meaning and purpose which permeates all of us, which is caught and funneled into the air your daughter breathes on this campus … The uniqueness I refer to is the degree of total involvement which our faculty assumes as its role.”

The year was 1968 and a lot has changed since then. The all-female Christian College soon after became today’s co-ed Columbia College. The faculty of whom he spoke are since retired or gone; Larson passed away in 2009.

But the uniqueness? The total involvement?

“That has not changed at all,” says Danielle Langdon, who assumed the role of visual arts and music department chair this past summer. “It’s entirely our priority here. It’s what drives every decision we make. The visual arts are labor intensive—running two galleries, maintaining a kiln, working with chemicals and technology—but we do it and more, all for our students. To give them a strong foundation to go out and be successful.”

Being successful means having the foundational abilities and techniques that artists need. But for today’s student, it also means translating those skills in a digital world. And that just might be the most significant change since Larson spoke of human fallibility 50 years ago. 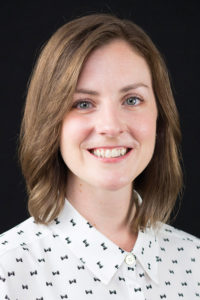 Danielle Langdon, chair of the Visual Arts and Music Department

“Technology is becoming more significant in classrooms every year,” Langdon says. “Art is a reflection of society at any given moment, and today’s society is driven by technological advances. It’s important that artists acknowledge the role technology plays in people’s lives.”

Columbia College was an early adopter of technology—college-wide and in the department of visual arts and music. Professor Mike Sleadd recalls computer towers so heavy they needed two-by-fours to secure the tables.

And with Langdon at the helm, the department has caught up to today’s handheld generation.

As a designer and artist, Langdon has explored the human-smartphone relationship since she was in graduate school at the University of Missouri. Her graduate work, which was mostly portrayed through video, shows people in everyday settings letting their smartphones make decisions for them. “Jump,” the phone might command a group of women, all of whom comply.

It’s unnerving to watch, perhaps a bit funny at times, but it’s meant to provide a subtle commentary on the role phones now play in our lives.

While Langdon uses technology to critique itself, in the classroom, she remains focused on the foundational skills and techniques that are the linchpins of a liberal arts education. Students might use Adobe Illustrator or Photoshop, but they must demonstrate artistic thought and ability, she says. They must focus on the work itself, not the software they might use to create it.

“You don’t need a sophisticated program to make powerful art,” she says. “The technology used to create it is not going to make or break a piece. I’m teaching my students to use technology as a tool, not a crutch.” 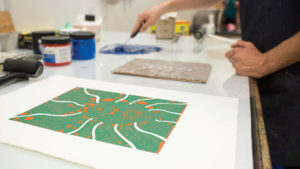 A student in Mike Sleadd’s printmaking class inks a linocut block, a technique invented in the 19th century.

It’s that thoughtful and balanced approach to art in a tech-saturated world that Sleadd, the previous department chair, looked for when the department was tasked with replacing three long-time faculty members in 2012. That’s the year Larson’s core group—Professors Tom Watson, Ed Collings and Ben Cameron—all retired. Sleadd and the art faculty, including long-time Associate Professor Naomi Lear, specifically wanted educators who would keep the department relevant while still demonstrating an understanding and respect of historical processes.

Langdon may be tech-savvy, but she also has a deep understanding of design pre-Photoshop; she references the history of art/design in all her classes and teaches processes like hand-drawn typography.

Sleadd also chose Bo Bedilion, now associate professor, because of his skills as a potter. Ceramics has become a significant part of the program since his arrival, Sleadd says. 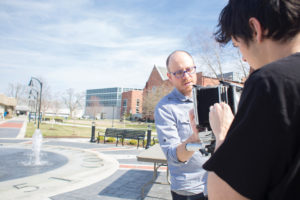 Associate Professor Scott McMahon brought an appreciation and knowledge of the history of photography and alternative photographic processes—he used part of his on-campus interview to demonstrate his darkroom skills.

With the trio now integrated into the department, Sleadd is confident that Columbia College continues to teach a solid foundation in fine arts through painting, drawing, illustrating, graphic design, photography and ceramics.

“We’re doing what we’ve always done based on traditional fine arts, but focusing on these areas and what enhances the program,” he says.

Langdon refers to the past couple of years as a discovery period.

“I’m learning how the department has been run and making sure the program remains as successful as it has been in the past,” she says. “I’m learning as much as I can about what’s been done well in order to preserve those successes, and continue to improve elsewhere to keep the department relevant and moving forward.” 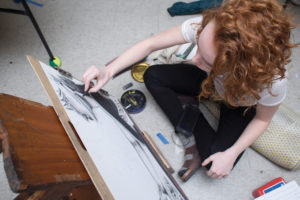 One way to demonstrate that relevancy in the Columbia community is to involve more students in local and regional events. That’s why one of Langdon’s first goals as chair is to create more gown-to-town opportunities such as having students participate and hosting events during the First Fridays series in Columbia’s North Village Arts District. She hopes to have more community art events on campus, too.

Langdon is working to foster more collaboration between the visual arts and vocal arts, both housed under the same department.

Although music classes have been offered for years, the Bachelor of Arts in Music is relatively new. Assistant Professor Nollie Moore has done a wonderful job creating a nurturing environment for vocal art students, Langdon says, and she hopes to build upon that, creating cross-discipline opportunities for all art students.

“Music is an art, and our goals are very much in line with one another,” she says. “We are advocates for all the arts.”

Langdon also plans to continue supporting the two galleries in Brown Hall. The Sidney Larson Gallery, under the direction of McMahon, continues to display professional work by nationally and internationally known artists. Under the direction of Bedilion, three-dimensional art, as well as alternative media, will continue to be displayed in the newer Greg Hardwick Gallery, named for accomplished musician, printmaker and potter Greg Hardwick ’00.

A faculty showcase, student exhibitions and a high school showcase will continue to be premiere events, as will Paper in Particular, celebrating its 40th year this February.

It’s these types of programs that keep the department vibrant, even as funding for the arts is being cut at schools across the country.

“The reason we are given resources and support is because of the people who came before,” Langdon says. “You cannot do anything without understanding those who came before you and knowing that you’re working on the shoulders of giants. I feel a responsibility to carry on that legacy and to ensure that art continues to be a program that our students are excited to be part of and one that the institution respects.”

And a key to that is the faculty’s total involvement—just as it was in 1968.

“We’re colleagues first, and friends very quickly after that,” Langdon says. “We spend a lot of time together at work and outside of work. And that collegiality trickles down to our students. It’s that total engagement that makes us unique and special.”

To make a gift to support the Columbia College Art Department, visit my.ccis.edu/givenow