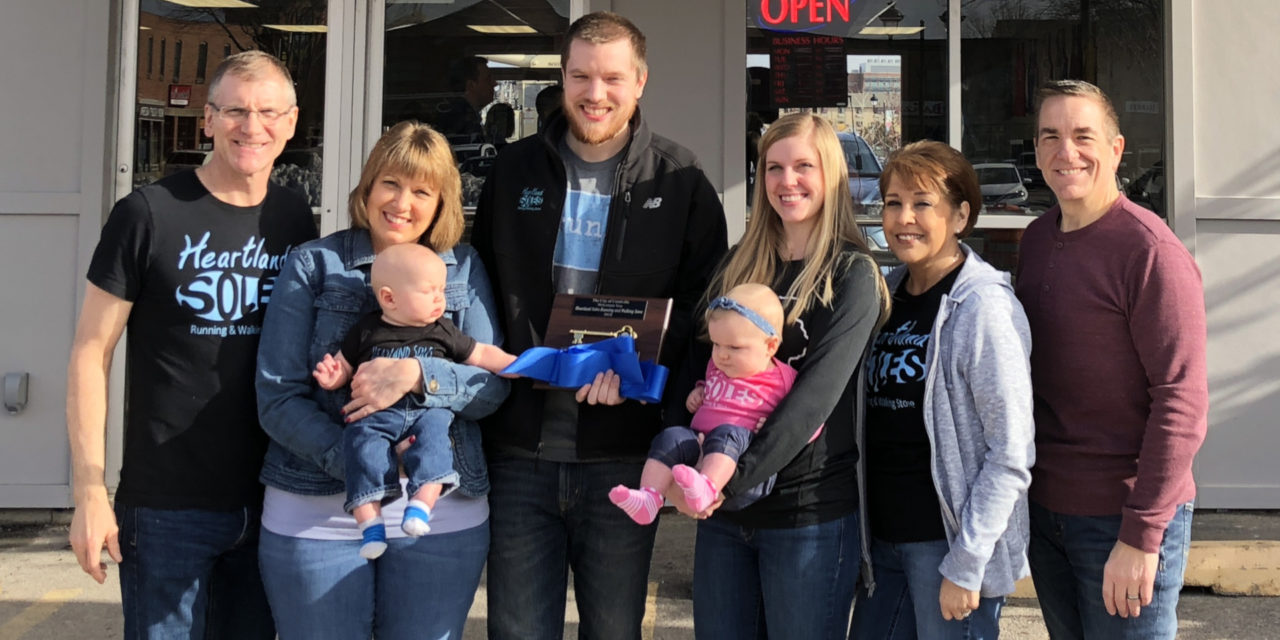 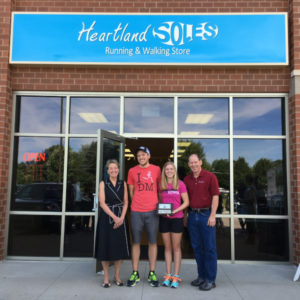 Jordan Andrews ’15 and Lindsey Martin Andrews ’14, center, opened Heartland Soles in Des Moines in 2016, and added a second store in Iowa City in 2018.

Lindsey Martin Andrews ’14 ran her first 5K race as an 11-year-old, and was immediately hooked on running. Jordan Andrews ’15 caught the distance bug in sixth grade, and together as high-schoolers they harbored dreams of someday opening up a running store. Less than 10 years, a pair of cross-country moves, a marriage and a daughter later, their dreams have come true.

The Andrews opened Heartland Soles, a store located in the Des Moines suburb of Johnston, Iowa, in July 2016, and a second location just outside of Iowa City this past April. What makes Heartland Soles different is that in addition to its various shoe offerings, Lindsey provides gait analysis to understand each customer’s unique footwear needs.

The idea was hatched when the pair, as teammates on the Lee’s Summit, Missouri, cross-country team, realized that the city didn’t have a running store.

Columbia was the next destination for the couple, though with a bit of a detour. Lindsey is a year older than Jordan, and Columbia College hadn’t yet started its cross country and track & field programs, so she attended Stephens College for her freshman year.

Jordan was being recruited straight out of high school for the Cougars’ inaugural season, and Lindsey joined him across downtown for his recruiting visit. Once she saw the campus, found out she could switch to a more appealing major and run for the same school as her boyfriend, the pair were reunited.

“I had a change in my interests,” Lindsey says. “I wanted to study special education, which CC had and Stephens didn’t. It really just kind of ended up nicely that way.”

Lindsey earned six All-America honors at various NAIA Championship meets for the Cougars, but it was a different meet that the couple looks back upon most fondly. April 23, 2015, served as a pivotal moment; that’s the day that Lindsey competed at the Drake Relays, one of the most prestigious meets in the world, and a crown jewel of the state of Iowa.

That afternoon, she became the first Cougar to ever compete on the historic blue oval of Drake Stadium. In front of a crowd of thousands, Lindsey finished 11th in the 10,000-meter run against a loaded field of NCAA Division I runners. The atmosphere made a mark on the then-junior.

“I had never seen anything like it. The drum line was playing and was matching my heart beat. It wasn’t my best race, but it was an experience that would forever shape our future.”

Meanwhile, Jordan credits the entrepreneurship class he took that helped him learn about starting his own business. One of those classes included a project in which students developed a business plan and learned about all of the required paperwork for starting a business.

The plan Jordan developed was for a running store in the Kansas City area; shortly after he created that project, a running store opened in the very location he had chosen for the business plan. “It actually helped, it gave me confidence and a good sense of direction for the future. I took a lot of the information from that project and adapted it to fit our business plan for Heartland Soles, which was a huge resource in getting our business off the ground!”

Both students graduated and were married that summer, but Lindsey had athletic eligibility remaining, so she transferred to the University of New Mexico to run for the perennial distance power. The Lobos, bolstered by several transfers like Lindsey, won the 2015 NCAA Division I Cross Country national title, tallying one of the lowest team scores in NCAA history.

The couple gained valuable experience being mentored by one of the first specialty running store owners in town. In addition, Lindsey studied exercise science in Albuquerque to complement Jordan’s business studies.

Part of what separates Heartland Soles from other running stores is the staff’s use of gait analysis to match the right kind of shoes to a customer’s foot.

“I think with my background in business and her background in exercise science, we have a unique set of skills that most stores do not have,” Jordan says. “Many stores have one or the other but not necessarily both, so we each bring something important and unique to the table. She is able to truly understand the gait cycle and help customers get a proper fit and avoid injuries. She’s been great about sharing and teaching her knowledge to myself and our other employees so we can all utilize her skills on a day-to-day basis and help our customers get the best fit.”

They’ve also made a home in the Des Moines community. The couple is active in forming a bond with the customers that have supported them, and Lindsey takes full advantage of the couple’s close proximity to Drake Stadium.

“I often get to run by it and sometimes will just go and stand outside and think of all of the incredible athletes that have run on those streets and competed inside that stadium. It’s just a very special place to be!”