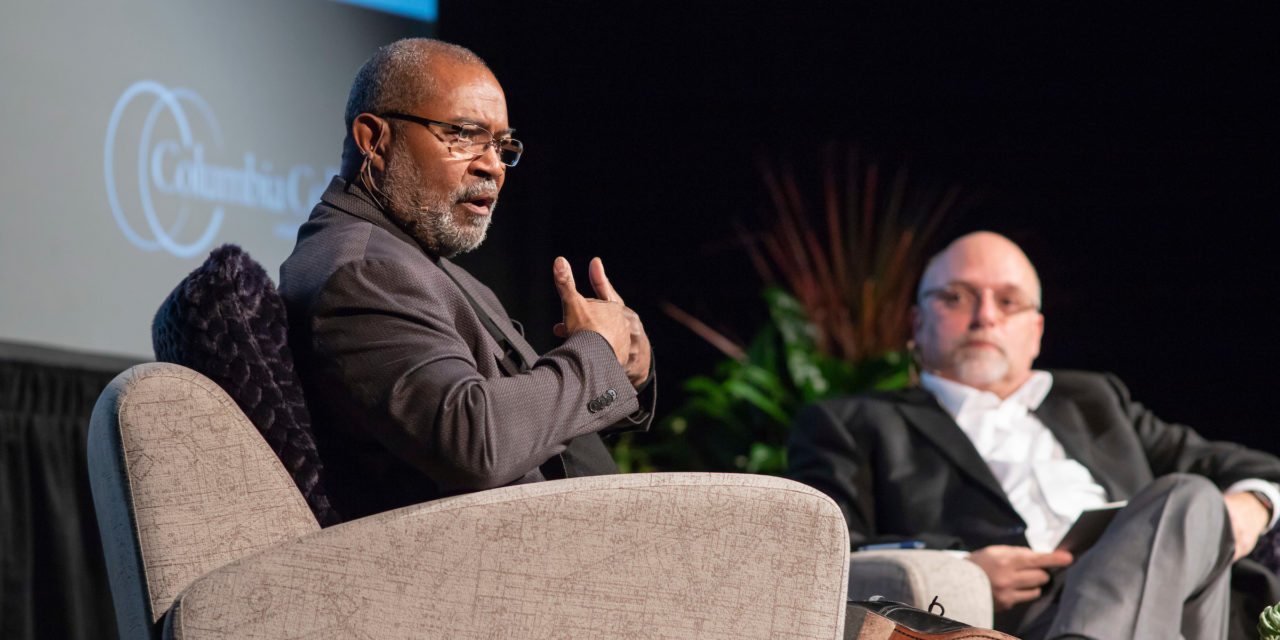 The 2019 Schiffman Lecture in Ethics was unlike any of the previous 16.

For starters, the format of the March 6 event was changed from a lecture to a conversation between the guest, “Black Klansman” author and alumnus Ron Stallworth, and Columbia College President Dr. Scott Dalrymple.

The subject matter – Ron’s life story – was additionally unique. As we profiled in August 2018, Stallworth’s memoir chronicles his infiltration of the Colorado Springs chapter of the Ku Klux Klan in the 1970s. The Schiffman lecture came just 10 days after “BlacKkKlansman,” the Spike Lee-directed film that used Stallworth’s book as its basis, won an Academy Award for Best Adapted Screenplay. It was the first Oscar of Lee’s storied career, and was understandably a big moment for the author, as well.

Perhaps Ron’s most star-struck moment came immediately after the presentation of the Oscar on-stage; he, Spike Lee, the other co-writers and presenter Samuel L. Jackson walked toward the wings and saw Congressman and civil-rights leader John Lewis. “I walked up to him, introduced myself, and thanked him for everything that he went through to make my life, and those of many others in this country, better,” Stallworth said. The two shared a selfie backstage to commemorate the moment.

Stallworth joked that he and his wife, Patsy, didn’t receive the famed Oscar “swag bags” that were valued at approximately $100,000, but it was still a memorable night for the El Paso, Texas, native. “It was just a fabulous experience for us; we won’t forget it any time soon,” he said.

As Dr. Dalrymple presented selected clips from the movie, Stallworth shared various stories from production of the film; the crowd erupted in laughter at his recounting of his initial introduction to Lee: “The first words out of my mouth were, ‘You’re a little guy, aren’t you?’ Fortunately, the contracts were all signed!”

The most powerful moment of the evening came when Stallworth was asked if he still had his Klan membership card; the retired officer reached into his back pocket, pulled out his wallet, and produced the red, laminated card. He then proceeded to pick up his satchel, and pulled out his membership plaque commemorating his induction into the organization.

At one point, Stallworth made the point that black law-enforcement officers are in a particularly precarious spot, considered too black by the white community they serve, and too “blue” by the black community of which they are a part. “All we want is to do our job and provide for our families, but we have to exist in that dual world where no one wants us.”

Following the formal conversation, the pair opened the floor for several questions. The final one of the evening came from a high-school senior, who asked what her generation could do to help address many of the issues that arose in the film and during the evening. Stallworth’s answer was fitting for a lifetime public-servant: Be an informed citizen. Vote.

Stallworth hopes that message resonates with the audiences he will be talking with as his speaking tour wraps up in promotion of “Black Klansman.” After the promotional tour, Stallworth will begin work on its sequel, which will tell the story of the rest of his 20-plus-year law-enforcement career. And remember, he now has Spike Lee on speed dial, so stay tuned. 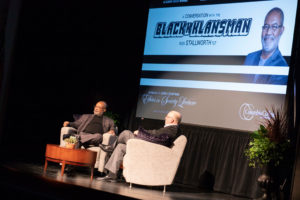 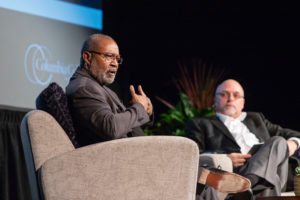 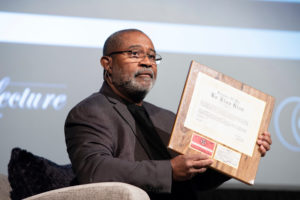