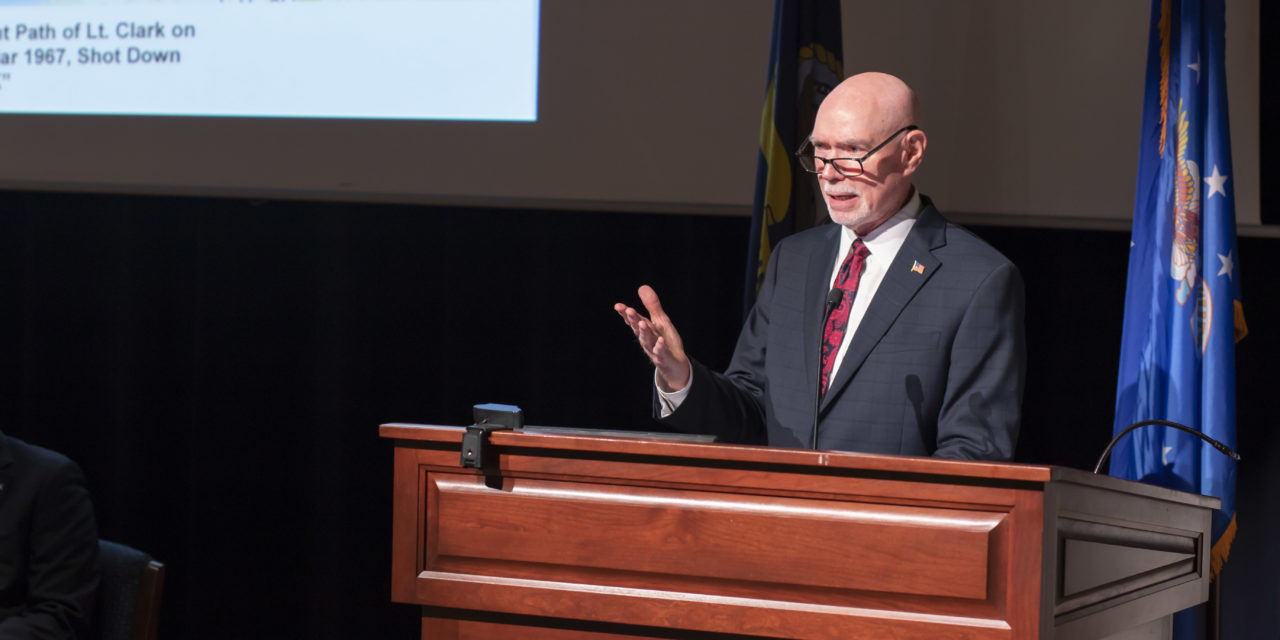 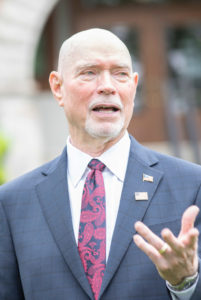 Clark recounted his career as a RF-4C Phantom II pilot at RAF Alconbury, England, then flying combat missions in Southeast Asia with the 11th Tactical Reconnaissance Squadron at Udorn Royal Thai AFB, Thailand, in October 1966. On March 12, 1967, then-Capt. Clark was forced to eject over North Vietnam and was immediately captured. After spending 2,170 days in captivity, including at both the infamous “Hanoi Hilton” and the prison camp at Sơn Tây, he was released during Operation Homecoming on Feb. 18, 1973.

Clark recounted the circumstances regarding his plane’s crash: the split-second decision-making over how best to eject from his Phantom jet, understanding the forces that would exert themselves on his body, and ultimately shooting himself out of the plane. “I was just along for the ride. I could see nothing but gray; my head flung from side to side, and my left arm (which was opposite the hand that pulled the secondary ejector handle) flailed uncontrollably in the wind blast,” he said.

The Columbia native then spent much of his speech recounting the conditions he endured for years at Hỏa Lò Prison – known better to service members as the “Hanoi Hilton” – including a stretch in solitary confinement. Once he returned to a regular cell, Clark described sharing a 3½ foot-by-8 foot cell with another inmate, and the process involved in “exercising” by taking three short paces inside the cell at a time before turning around and repeating the process.

In a matter-of-fact manner, Clark summarized his time as a POW rather comprehensively: “As the months and years passed, I was introduced to the questionable hospitality of the North Vietnamese, including: torture; solitary confinement; threats of execution by putting a loaded and cocked 1911 .45 to my head; drugging; political indoctrination; drugging; intimidation; starvation diet; lack of the most rudimentary medical or dental care; almost dying from an unknown respiration illness; suffering from malaria; exposure to the cold and heat without proper clothing or facilities; food unfit for anything but pigs; and if I were to go into details, it would get disgusting, so I won’t do that.” 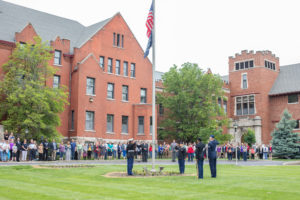 Following the ceremony, attendees proceeded to Bass Commons for raising of the ceremonial flags and the playing of taps. The inaugural Military Recognition Day flags in 2008 were flown over Camp Ripper, Iraq, to recognize the servicemen and women attending Columbia College online. Each year, one of Columbia College’s military locations is selected for the annual distinction to symbolize the connection between our main campus in Columbia and our military locations across the nation. This year’s flags come from our Fort Sill location. They will remain flying at Bass Commons through Memorial Day in recognition of all Columbia College military service members, veterans and their families. 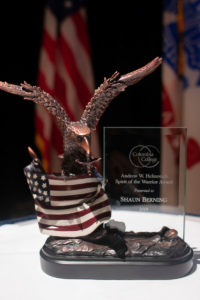 The inaugural Andrew Helmreich “Spirit of the Warrior Award” was presented to Staff Sgt. Shaun Berning.

During the ceremony, several awards and scholarships were presented, including the first Andrew Helmreich ’18 “Spirit of the Warrior” award. Helmreich, an Army sergeant who passed away in October and was awarded his Bachelor of Science degree in Management and Human Resource Management posthumously in December, served his country for five years before being honorably discharged in 2017. During his enlistment, Andrew was deployed as a sniper to Afghanistan with the 1st Battalion, 504th Parachute Infantry Regiment in support of combat operations for nine months in 2014. The Andrew Helmreich Memorial Spirit of the Warrior Fund was established at Columbia College to honor his memory and spirit. 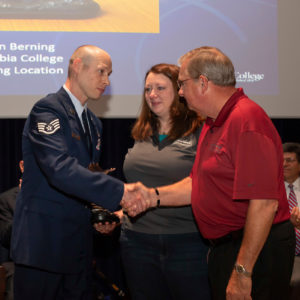 Staff Sgt. Berning receives his award from the Helmreich family.

“Shaun motivates his fellow veterans to be involved and is carrying on the tradition and the passion that Andrew displayed in leading CCSV,” said Keith Glindemann, senior director of military and veterans services and a retired Army first sergeant himself. “At a time when we needed a student leader, Shaun stepped out of the shadows with a can-do attitude and is ensuring that the focus and work of CCSV continues.”

Berning, who is pursuing a Bachelor of Arts in Psychology from the Evening Program, was also awarded the Alan Harris Missouri Veterans Assistance Scholarship. Harris enlisted in the Army before his second year at the University of Missouri, then attended night school while stationed in Denver and El Paso. After being transferred to Fort Leonard Wood, he enrolled in Columbia College’s classes on base. Upon completion of his tour of duty, Alan moved to Columbia and completed his Bachelor of Arts in Individual Studies as a day student, was named to the Dean’s List and graduated with honors. A longtime member of the Columbia business community, Harris also served in a number of volunteer leadership capacities, including that of President of the Columbia College Alumni Association from 2000-02. 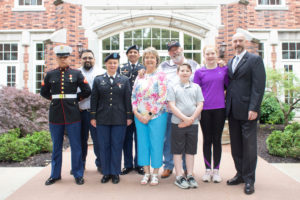 Three student veterans were presented $1,000 Col. Charles E. McGee Scholarships, which honors an original member of the famed Tuskegee Airmen, the first African American men to earn pilots’ wings in the Army Air Corps and fly in combat during World War II. At the time of his retirement, Col. McGee held the Air Force record for most combat missions flown (409) during his distinguished career. A true lifelong learner, after retirement he earned his degree from Columbia College-Kansas City in 1978, and in 2007, he was awarded, along with his fellow Tuskegee Airmen, the Congressional Gold Medal, the nation’s highest civilian award. In 2011, Col. McGee was enshrined into the National Aviation Hall of Fame.

Shelby Perucci, a Navy veteran studying for her Bachelor of Arts in Sociology, was presented the Col. Mike Randerson Scholarship. Randerson is a Vietnam veteran who spent 25 years in Air Force before serving as Columbia College’s vice president for Adult Higher Education (now known as Columbia College Global) from 1996 to 2014. During his tenure, the adult student population increased from 4,000 to 18,000, the number of nationwide locations more than doubled to 35, and the Online Program, which serves as many as 20,000 students worldwide, was established.

With Thursday’s scholarship announcements, Columbia College has now awarded honors to 60 student veterans since Military Recognition Day began. To support the scholarships listed above, or the Columbia College Fund, which supports the college’s current greatest needs, please give now.