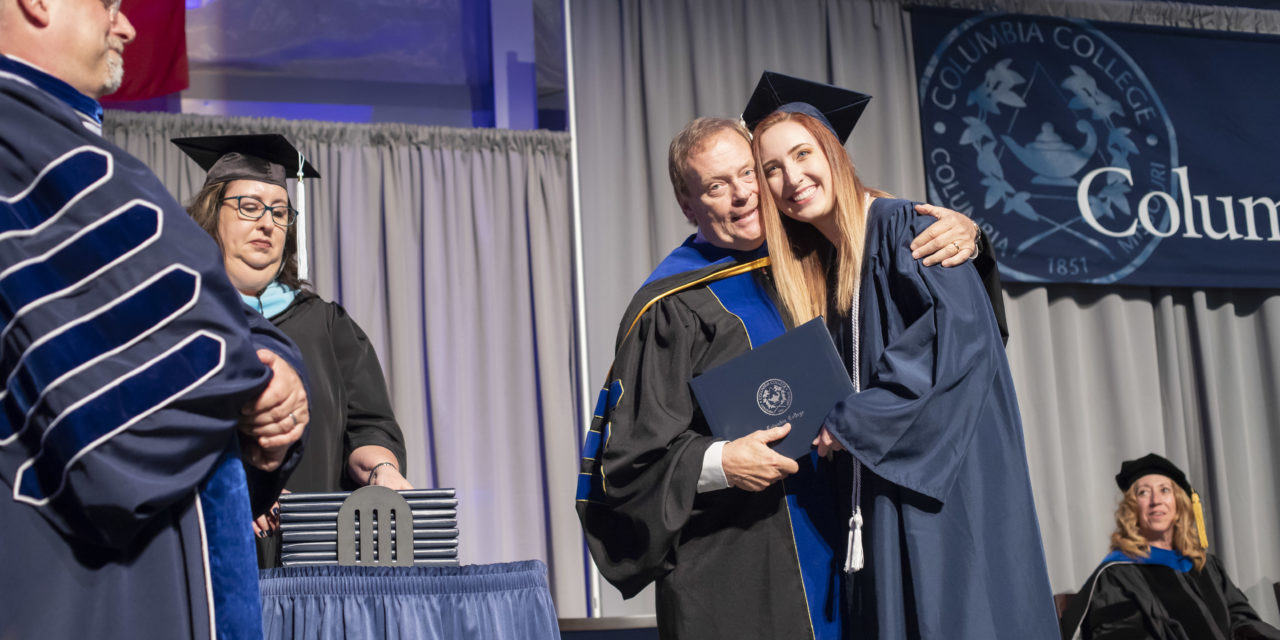 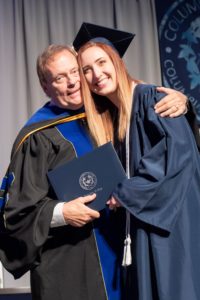 Dr. Michael Lyman hugs his daughter, Kelsey, as he presents her diploma Saturday at Southwell Complex.

One family connection dating back to the earliest days of the institution continued while another came to a conclusion during commencement ceremonies Saturday at Columbia College’s Southwell Complex.

Overcast skies and a brief spell of rain forced the traditional Ivy Chain ceremony, which has taken place at Columbia College since 1901, inside for the second time in three years yet didn’t dampen the powerful meaning the ceremony holds for students.

John Heimann, a Bachelor of General Studies graduate from Moberly, Missouri, is part of the sixth generation of his family to graduate from the college – dating back to Laura Allie (Rutherford) Hammett in 1871 – and the third to participate in Ivy Chain. His great-grandmother, Laura (Hammett) Van Houten, along with her twin sister, Audrey Ann (Hammett) March, participated in the same ceremony back in 1947. Following the ceremony, Heimann took family photos in the same spot outside Missouri Hall that his great-grandmother and great-great-aunt did 72 Springs earlier.

“To be on the same campus, at the same building, in the same ceremony that she participated in that thousands of others (have taken part in) over the last, 100-plus years, is just amazing,” said John’s mother, Laura.

The two commencement ceremonies featured 423 students from 26 of the college’s 36 locations nationwide. Among them were the first nine graduates of the college’s Bachelor of Science in Nursing program. While the college has awarded BSN degrees to registered nurses since 2014 as part of its “RN to BSN” online program, this is the first cohort of graduates from the four-year program.

Kay Dingler, who is retiring after 14 years as a nursing instructor and coordinator of the Associate in Science in Nursing program, noted that each of the college’s 35 nursing graduates has a job already lined up. “Where can you have a career when you graduate and have 100% job placement? Nursing is that way,” she said.

Another long-tenured career came to an end Saturday afternoon when Dr. Michael Lyman, professor of criminal justice and human services, participated in the commencement services as faculty marshal – the longest-tenured faculty member currently in service who holds the official college mace and leads the commencement procession – for the final time.

His daughter, Kelsey, graduated with dual degrees in business administration and public relations and advertising, and Dr. Lyman was by her side to present her diploma cover from Dr. Dalrymple. “This is an outstanding moment,” he said. “Kelsey’s made great friends here, had great instructors, spent a little time in the music program with Nollie Moore and met a lot of great people over there, and loves each and every one of her business faculty here at the college; they’ve taught her so much. What more can you ask for? Plenty of cause for celebration.”

Both Lymans reminisced about their daily get-togethers over coffee in his office each morning, and both have suspicions about the professor’s future on the couch. “I’m going to try to master the art of boredom, but I don’t think I’ll be successful,” said Dr. Lyman.

Kelsey was equally doubtful. “He has so many hobbies, there’s no way he’s ever going to be bored. He’ll be fine.”

KOMU’s KaMaria Braye presents a story on Columbia College’s Kelsey and Dr. Michael Lyman:
“Columbia College graduation has a new meaning for a father and daughter”

The memorable moments didn’t stop there. During the morning ceremony, Columbia College President Dr. Scott Dalrymple awarded an honorary doctorate to Tom Atkins for his lifetime of service to the college. Atkins, who was a member of the Board of Trustees from 1976-2001, and its chair from 1982-99, along with his wife, Linda (Holman) Atkins ’54, have supported several initiatives vital to the college’s success. Atkins-Holman Student Commons is named in their honor, and the family’s philanthropy was key in the construction of both the Brouder Science Center and the Quad beatification project.

Later in that ceremony, Alex Bergman, who graduated from the Day Program with a Bachelor of Arts degree in studio art, issued a challenge to her fellow graduates. “May we celebrate this moment fully, and then let us open our minds to the world with the expectation of engaging with it in a new way. This may mean being uncomfortable, but I think being uncomfortable signifies our willingness to seek a greater potential in the many years to come. Columbia College has given us a quality education; let us continue to use it to be creative, curious and innovative learners,” she said.

John Hamrick, who earned his degree from the Lake County, Illinois, location during the afternoon ceremony, urged graduates to give themselves permission to fail. “I hope you find wisdom in your failures. Grow despite them, and become a wiser person because of them.”

With this weekend’s ceremonies complete and its graduates now official members of the Columbia College Alumni Association, the college’s alumni group is now more than 89,000 members strong. 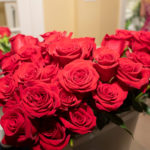 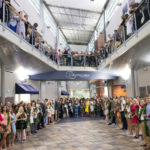 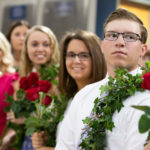 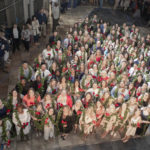 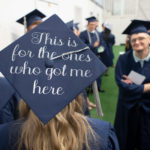 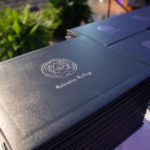 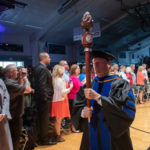 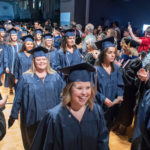 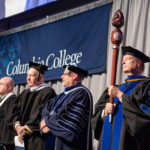 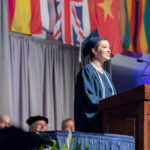 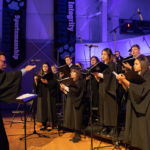 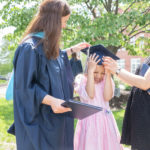 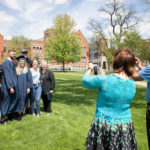 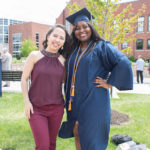