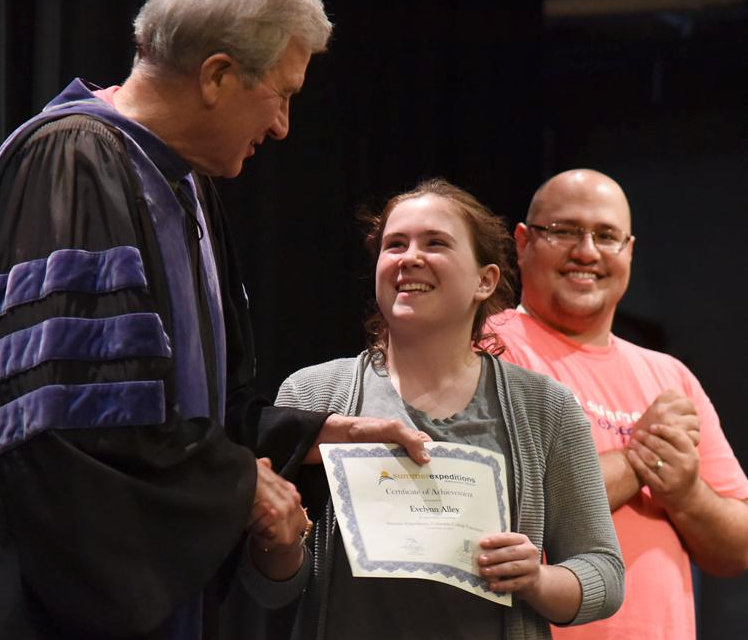 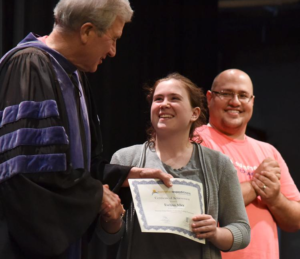 Terry Smith, professor of political science at Columbia College and director of the Honors Program, left, hands a certificate of achievement to eighth-grader Evelynn Alley on Thursday at Launer Auditorium. Eighth-graders in the program were honored on stage to receive their certificate from Smith. – Kate Seaman, Columbia Missourian

After filing onto the stage at Columbia College, a group of fifth graders began to sing the lyrics, “One foot in front of the other. We’re ready to begin. Come on, my sisters and brothers. Let’s let the future in.”

The song lyrics come from “It’s Our Time,” which they learned during Columbia Public School’s Summer Expeditions program. On Thursday, a group of eighth graders graduated from the program to the tune of their fifth grade peers’ performance.

The song encompasses the future-focused message of the graduation and the program as a whole.

The students chosen for the program are part of underrepresented communities who may not see college as a future endeavor. One student from each Columbia school is chosen as fifth graders based on their academic performance, attendance and behavior, so getting into the program is competitive …