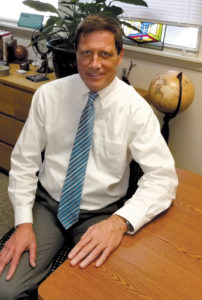 Editors note: This article will appear in the upcoming Summer 2019 edition of Affinity magazine which is set to hit mailboxes in late July!

Eric Oglesby finds ways to make history come alive for his students. To show Napoleon’s march to Russia, he set up a path in the parking lot. When teaching about the Transcontinental Railroad, he brought in a model train. And he turned off the lights and brought in a small candle to illustrate life before electrical power in a lesson about the Industrial Revolution.

To teach history, you need to be a good storyteller. “You have to make it interesting for the students,” he says. “They won’t necessarily like everything that you teach. But the goal is to grab their attention and find what interests them.”

Oglesby has a passion for history, and he wants to spark that in his students as well. His stories have been entertaining students at Columbia College since he started teaching history as an adjunct professor at Columbia College- Fort Worth in 1999. Over the past 20 years, he has taught classes at the Fort Worth location and in the college’s online program, in addition to his full-time job as a history teacher at L.D. Bell High School in Hurst, Texas.

“His enthusiasm for history draws people in,” says Jeannie Simmons ’02, senior regional director for Columbia College Global-Military, who took Oglesby’s classes when pursuing her bachelor’s degree. “Students may go in thinking they’re going to hate history, and they end up excited about the class and wanting to learn.”

To get his students involved, Oglesby often asks about their interests and incorporates them into the classes. If they want to learn more, he brings in pictures, finds YouTube videos and provides websites to show real-world perspectives.

Simmons remembers one class where Oglesby asked students to find out about the history of their hometowns. During the project, Simmons discovered that her family was instrumental in incorporating the city and initiating the school district. “I never thought much about how my hometown came about until Eric had me research it,” she says. “He was honestly interested in the history of his students and felt he could learn from them as well.”

For Oglesby, that lifelong love of learning started at an early age. He grew up in Virginia and remembers taking field trips to historical sites such as Williamsburg and Jamestown, Virginia, and Gettysburg, Pennsylvania. “On the coast, there are a lot of great historical places to visit, and I was interested in them all,” he says.

Inspired by a high school history teacher who was a great storyteller as well, Oglesby decided to make it his major. He earned bachelor’s degrees in history and French from Texas Christian University at Fort Worth and a master’s in history from the University of Texas at Arlington.

In 2001, he became a history teacher at L.D. Bell High School where today he serves as the department chair. He teaches in the school’s International Baccalaureate college program, where his classes had the highest pass rate in the state of Texas last year. He was named Texas Teacher of the Year by the Texas Daughters of Colonial Wars. 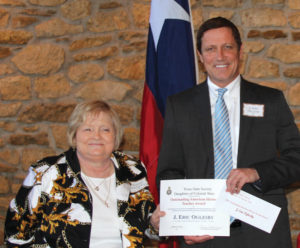 Teaching students in both high school and college, Oglesby says he enjoys getting to know students who are at different points in their lives. “At Columbia College, I love getting to go to class with the military students and learning from their perspectives,” he says. “They really develop an appreciation for history, especially the places where they were stationed.”

Oglesby also finds ways to support his Columbia College students by volunteering at events and making financial contributions. This year he made a gift to name a classroom in New Hall, the academic and residential building opening on the main campus this fall.

“Eric always goes above and beyond with his level of involvement with the college,” says Melissa Montgomery ’06, senior director of philanthropy at Columbia College. “He genuinely cares about the students and finding ways to contribute to their education.”

Oglesby says he hopes to continue to help students have the resources they need and to support the college that’s been a big part of his life for the last 20 years.

“Columbia College is giving me the opportunity to teach something that I love,” he says. “If I can help them to a make a difference to one student, it’s worth all the money in the world.”