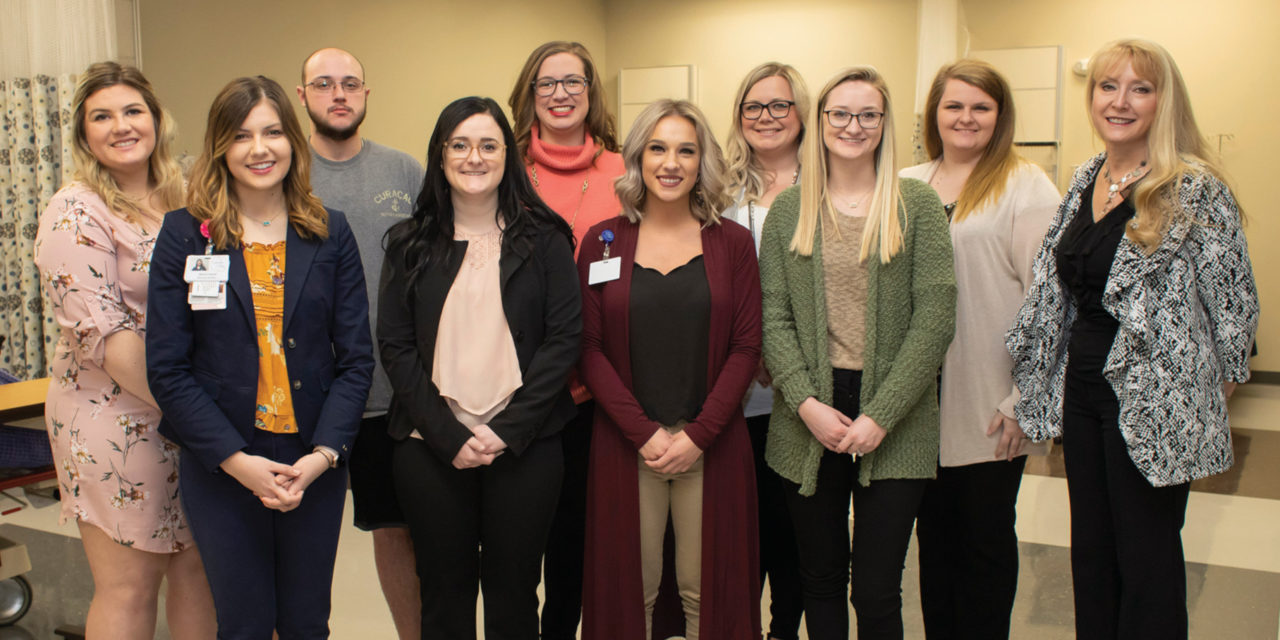 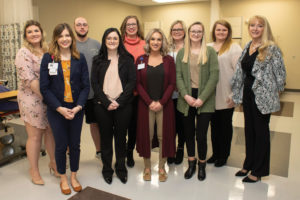 The genesis of the Nursing program at Columbia College — which is celebrating its 30th anniversary later this year — came from the innate nature of nurses themselves. “Nurses tend to have a caring personality, as everyone knows,” says Dr. Tina Dalrymple, director of the Nursing program and faculty chair. “But they also tend to be highly driven professionals who like to get things done.”

In the 1980s, Sharon Taylor was working for Columbia Public Schools (CPS) as the director of the Columbia Area Career Center’s practical nursing program. At the time, while schools like the University of Missouri educated students with no professional nursing knowledge to earn their Bachelor of Science and become a Registered Nurse (RN), there were limited educational opportunities for Licensed Practical Nurses (LPN) in mid-Missouri to further their nursing education.

“There wasn’t the opportunity for them to become RNs,” says Taylor, who approached Columbia College officials, including then-President Dr. Donald Ruthenberg, about forming a cooperative agreement between CPS and Columbia College to offer an Associate in Science in Nursing (ASN) degree.

It would be a laborious process to get the program up and running. No classes could be taught until approval was granted by the Missouri Board of Nursing, and that was a daunting task. “I was told by several people that I would never get the program approved by the state board,” Taylor says.

Yet Taylor persisted, prepared — including working with the dean of the Mizzou School of Nursing to ensure Columbia College’s program wasn’t overstepping bounds — and then on a cold day late in 1988, drove down to Jefferson City to make her case. Before a panel of members, Taylor was allotted 60 minutes to make her presentation. Within 15 minutes, the board approved the program. “I addressed everything,” she says. “I had done my homework.”

Along with fellow charter faculty members Dr. Faye Fairchild, Dr. Joyce Gentry and other colleagues, Taylor earned national accreditation for Columbia College’s curriculum in 1995 from the National League for Nursing. “You can’t really talk about the nursing program without Sharon Taylor,” Fairchild says. “This program would not have launched without her.”

Ruthenberg and his successor, Dr. Gerald Brouder, were both staunch supporters of the nursing program. In Brouder’s case, it was an easy fit: Before serving as the 16th president of Columbia College, Brouder was the first male teacher at the University of Missouri School of Nursing, and also served as that school’s interim dean before eventually moving his office across town.

“Dr. Brouder had been my adviser in graduate school at Mizzou, so I already had a relationship with him,” Taylor says. That relationship continues to this day, as several Columbia College graduates have earned master’s and doctoral nursing degrees from Mizzou.

In 2003, two years after Taylor’s retirement from CPS, Columbia College assumed full ownership of and responsibility for the Nursing program. With Brouder nearly halfway through his 18-year tenure, the program had the administration’s full support.

That support has continued unabated under Dr. Scott Dalrymple’s leadership. As he likes to remind the crowd at each semester’s Nurses’ Pinning Ceremony, he loves nurses so much that he married one. In addition to serving as the college’s first lady, Dr. Tina Dalrymple developed the college’s Health Sciences programs, and now oversees both Nursing and Health Sciences.

In 2005, Columbia College began offering an ASN degree at its Lake of the Ozarks location, still the only other location besides the main campus for nurses to receive in-seat education. Students there work very closely with Lake Regional Health Systems (LRHS), the major healthcare provider in the area. Sara Riley serves as ASN Coordinator at the Lake location.

LRHS offers an externship program that accepts several nursing students each year. Lake ASN students work nights and weekends performing various tasks for the hospital, which provides valuable real-world experience. “It’s a recruitment tool for the hospital to get these nurses oriented to the hospital before they graduate, plus it’s an opportunity for the student to ask, ‘Do I like this? Is this where I’d like to work?’ Most of them stay at LRHS, so it’s a win-win for everyone,” Gentry says.

With its ASN program, the college has done well to educate the next generation of nurses, yet for years, the faculty yearned for a BSN program to solidify Columbia College as a premier nursing educational institution. In 2014, the college made the first step toward that goal by offering an “RN-to-BSN” program. Offered exclusively online, the degree program is for registered nurses who already have their ASN but wish to further their education. Some healthcare systems require their nurses to have their BSN; many offer career advancement to nurses with that distinction.

Once the online program was up and running, an in-seat BSN program was the natural next step. “The nursing faculty have wanted for many years for us to have a BSN in-seat program,” says Kay Dingler, who coordinated the ASN program in Columbia until her retirement this spring. “The RN-to-BSN program has worked well for our ASN graduates because they all wanted to come back and graduate again from Columbia College. But the in-seat BSN is a foundational program for us.”

Lindsay McEver, who has other nurses in her family, concurs. “The reputation of the ASN program provided quite a bit of trust in the program’s success and ability for the professors to prepare us for our nursing exams,” she says. McEver had enrolled at Columbia College solely to take pre-requisites en route to earning a BSN elsewhere, but once the college was approved to offer the degree in the fall of 2016, she stayed thanks to her positive experience during the evening classes she took while working. McEver graduated as president of the inaugural BSN class this spring, and has taken a position at University of Missouri Hospital in the neuroscience ICU.

Another BSN graduate, Kerigan Wessing, was one of four across the entire college recognized with a Presidential Award during commencement ceremonies this spring. She also earned her degree with distinction, and was voted by her peers to receive the Florence Nightingale Award for epitomizing the art and science of nursing.

Further evidence of the growth of the program comes with national recognition of the college’s students; to that end, the college has started the process to form its own chapter of Sigma Tau Theta, an international nursing honor society for BSN graduates. Until the college completes a three-year process to earn that chapter designation, the faculty is inducting its BSN graduates into a temporary Ivy Chain Nursing Honor Society; the group inducted its first class in mid-April prior to commencement ceremonies. Dr. Tina Dalrymple serves as the organization’s president, and several department faculty hold board roles.

In the same vein, this is also the first year that Columbia College nursing students were eligible for induction into Alpha Delta Nu, a national nursing honor society for ASN graduates. “Being a member of a nursing honor society is very prestigious. When you have that on your resumé and you apply for jobs, people know what that means,” Gentry says. 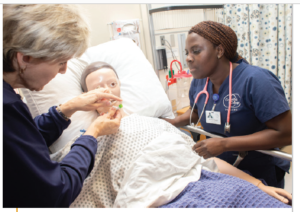 Dr. Faye Fairchild shows Elizabeth Daago the ports for a central-line
setup on a patient mannequin.

The college continues to innovate as it grows, and the opening of the Gerald T. and Bonnie M. Brouder Science Center in 2013 is a significant example. The new facility has helped facilitate the use of technology such as state-of-the-art advanced patient simulators, peripherals and advanced software to aid in students’ clinical skills development.

The program currently boasts five simulators for its students to utilize: a pair of SimMan 3G and a MegaCode Kelly high-fidelity simulators in Brouder; SimJunior, which is an interactive pediatric simulator; and Victoria, a laborand-delivery simulator, in the instructional center at Federal Hall in downtown Columbia.

President Dalrymple was so impressed with SimMan that he asked to be the hidden voice behind the male “patient” during one classroom simulation. Using a microphone in an adjacent room, he told students he wasn’t feeling well. When they asked SimMan why, he cycled through a number of unlikely maladies before ultimately claiming that he was pregnant. “It took them awhile to decide whether to send the patient to the Psych Ward, or to laugh,” Dalrymple says. They laughed, and he confessed to the ruse.

Some of that technology has been made possible through a pair of $150,000 grants awarded to the college in 2017 and 2018 by the Missouri State Board’s Nursing Education Incentive Program. In addition to the technology, the grants have helped fund faculty scholarships to further their education as well as hire full-time faculty and cover their salary for a year.

Only five awards are given statewide per year, and the college receiving awards in back-to-back years is a testament to the program. Gentry credits Laura O’Neil, assistant director of Institutional Grants & Foundation Relations, and Dr. Tina Dalrymple for their tireless efforts to secure vital funding. “Their work on these kinds of grant proposals is very, very helpful, very significant, and so beneficial to our ASN and BSN programs,” she says.

Columbia College has been blessed with a number of excellent instructors and professors over the years, and one announced her retirement this spring. Dingler, who served the college for 14 years and taught countless nurses, is transitioning into a part-time position, which will allow her to teach some lab and clinical sessions, and also spend quality time directly teaching students.

“The end is better than the beginning. I couldn’t have been in a better place,” she says. “I love Columbia College; all the faculty, all the staff, all the students are wonderful. I was just talking with one of my former colleagues from Boone [Hospital Center]. She teaches at another college, and she said, ‘I would retire, but I love my students.’ And I told her that I understand that.”

With Dingler’s retirement, Paula Garfias has assumed coordination of the ASN program in Columbia. Dr. Heidi Monroe serves as BSN Coordinator. Other full-time faculty members include Corrine Floyd, Janet Chance-Hetzler, and Sara Riley. Dr. Heidi Holtz, who has worked part-time as a clinical instructor since October, has joined the nursing faculty on a full-time basis as an assistant professor.

“We have a great team and the future is so bright,” says Dr. Tina Dalrymple. “The demand for our nurses is strong. Columbia College is truly changing lives — not only those of our students, but of the thousands of patients they will serve during their careers.”

Are you interested in learning how to start a scholarship in support of your passions? Call the Office of Development at (573) 875-7563. Want to support a scholarship already in place? Give now to the Columbia College Fund to support the college’s greatest current needs!