Alumna helps patients wake up to importance of sleep 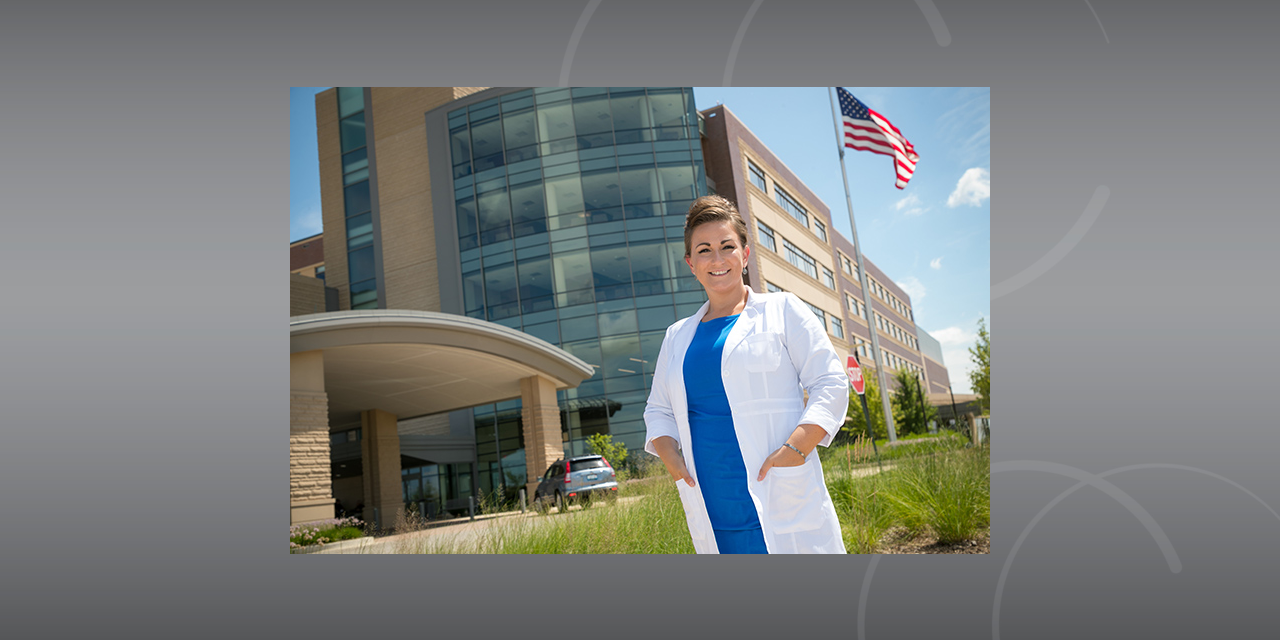 Andrea Ramberg ’18 knows first-hand what it’s like to struggle with sleep.

She’s experienced irregularities such as sleep walking and night terrors since childhood. And earning a bachelor’s in psychology at Columbia College-Crystal Lake with a full-time job and two young children didn’t leave a lot of time to sleep in.

These days, stress sometimes keeps her from a full night’s rest.

Mostly, she’s worried about making sure others have a good night.

Ramberg is a sleep specialist, a lesser-known healthcare specialty in an area critical to overall health.

Currently, she’s the business development manager at MedBridge Healthcare, a role she took on after serving as one of the first sleep navigators in the country. In her current position, she helps hospitals and clinics nationwide implement sleep screenings, treatments and long-term management programs for those suffering from sleep disorders.

“My goal is to get to patients before it’s too late,” she said. “Sleep has historically been seen as an outpatient issue, not something treated in the hospital. We’ve proven that identifying issues early and getting to patients through education is more likely to prevent readmission.”

One of the most severe issues is obstructive sleep apnea, which occurs when airways become blocked during sleep, disrupting normal breathing. It can trigger health problems such as cardiovascular disorders, strokes, dementia and diabetes. One recent study from a European group found higher cancer rates among women with severe sleep apnea.

Ramberg didn’t set out to become a sleep expert when she graduated from high school in Harvard, Illinois. She attended McHenry Community College and liked the idea of working in a psychology-related field, but was also finding success elsewhere.

She’d worked as a teller in school before getting promoted to customer service. By the time she switched professions, she’d risen to the level of personal banker.

“I enjoyed banking because of the interaction I would have with people of all walks of life,” she said. “But it didn’t give me the full satisfaction of understanding how to make one’s life better. I like understanding what makes people tick and helps them live a better life.”

Ramberg found her calling when she had the opportunity to watch a sleep study one night.

“I had a friend who worked in it and invited me to come watch,” she said. “I was hooked.”

She started performing overnight sleep studies, earning credentials in sleep along the way as she studied sleep hygiene, wellness, sleep disorders and the co-morbid diseases associated with sleep problems.

Next was taking on additional roles as a sleep health navigator, promoting the importance of detecting untreated disorders in patients coming to the hospital with correlating issues.

“The role of sleep health navigator became a way to help people in a whole new way,” she said. “I would navigate the halls of the hospital, working with multiple medical disciplines, and create awareness of something everyone has to do to survive—sleep—yet no one knows much about.”

She was able to pinpoint issues and recommend treatments immediately. She remembers grateful patients giving her hugs in the morning because they felt so much better after getting a good night’s sleep. In one case, a woman suffering from hypertension saw her symptoms reversed after receiving treatment for obstructive sleep apnea.

Ramberg continues to champion the importance of sleep in her current role, giving talks and interviews around the country in addition to meeting with healthcare representatives. This past year, she was the cover story in the August/September issue of the national Sleep Review Journal.

“It’s about taking a proactive role in helping my patients and developing the future of sleep medicine,” she said. “So much of where healthcare is headed is preventative wellness, and by taking care of your sleep, one can potentially see positive domino effects in their overall health.”

Ramberg credits returning to Columbia College and her psychology degree for challenging her to think of her work in new ways. Evening classes allowed her to study at a pace that suited her life as a health professional, wife and mother of two.

“It was hard work, but Columbia College gave me the flexibility to do it on my own timeline,” she said. “I didn’t have to pause anything to get my degree.”

“My classes allowed me to create something new and expand the sleep medicine field to a place where the world is just waking up to its value,” she said. “My degree allows me to spread that vision and touch more lives.”