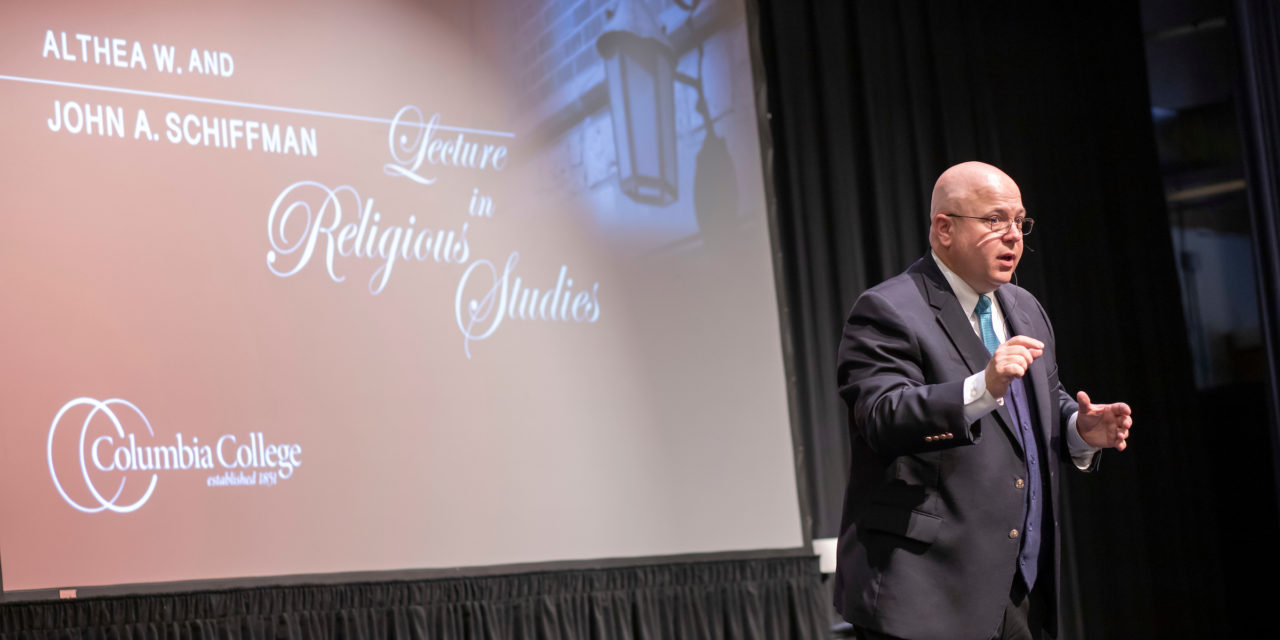 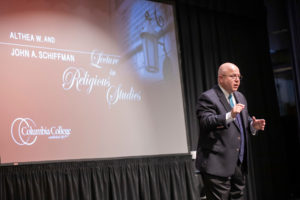 To the 21st-century observer, Christianity and capitalism don’t seem to be able to coexist, given the constant need for corporations to maximize profits and satisfy shareholders. Yet Columbia College Board of Trustees member Rev. Dr. Brad Stagg, who has spent several years studying the roots of capitalism, says that pure capitalism, as it existed in Adam Smith’s time, has its ideals intertwined with that of Christianity.

Stagg, who has served as the senior minister of Columbia’s First Christian Church since July 2012, was the featured lecturer for the 19th Schiffman Lecture in Religious Studies, held Tuesday, Oct. 8, in Launer Auditorium. He earned a Doctor of Ministry degree from Garrett-Evangelical Theological Seminary in Evanston, Illinois, earlier this year; his thesis, “Jesus, Adam Smith and Today’s Capitalism,” was the topic of Tuesday’s lecture.

While Smith is known as the “The Father of Capitalism” thanks to his 1776 magnum opus “The Wealth of Nations,” Stagg noted that economics might have been just his fourth-most-significant class as a professor at the University of Glasgow. In reverse order of acclaim, he also taught law, ethics, and, most importantly, theology.

Prior to writing “The Wealth of Nations,” in 1759 Smith penned “The Theory of Moral Sentiments,” which espoused what Smith called “mutual sympathy” and we know better as “empathy.” It was based in Jesus Christ’s teaching of the “Golden Rule”—commonly phrased as, “Do unto others as you would have them do unto you.” According to Stagg’s research, Smith essentially stated the key for a society would be to ask how to pursue what it needs and wants without harming someone else.

“The basis of capitalism is that we are moral, trusting, loving and caring to our fellow being, that we are moral beings,” Stagg told the audience, which included previous Schiffman lecturers Lt. Gen. Richard Harding and professor emeritus Dr. Anthony Alioto. “Is that what we have today?”

Stagg responded by returning to a story he told at the beginning of his lecture: His mother walked into a jewelry store at the mall one day, shopping for a gold cross on a necklace as a gift for a friend. After the clerk asked a few questions to narrow down the search, the clerk asked Stagg’s mother, “Would you like it plain, or one with a little man on it?”

The clerk’s face turned puzzled. “What does Jesus have to do with the cross?” she said. Stagg pointed out that just as the jewelry-store clerk failed to make the connection between the symbolism of the cross and Jesus, our modern-day culture has disconnected Adam Smith’s empathetic foundation from today’s corporate-focused capitalism. Modern-day critics of capitalism consider the model’s emphasis on self-interest to be nothing more than greed, yet Stagg argues that under Adam Smith’s view of capitalism, self-interest is counterbalanced with empathy for “the other.”

Finally, Stagg emphasized, all is not lost: He lifted up Whole Foods CEO John Mackey, a fellow native Texan and co-author of the book, “Conscious Capitalism,” as an example of a return to Smith’s free-market roots, along with several other scholars and movements who are trying to right the ship.

“Capitalism is only as good as we are moral,” Stagg concluded. “Adam Smith and Jesus were right from the beginning.”