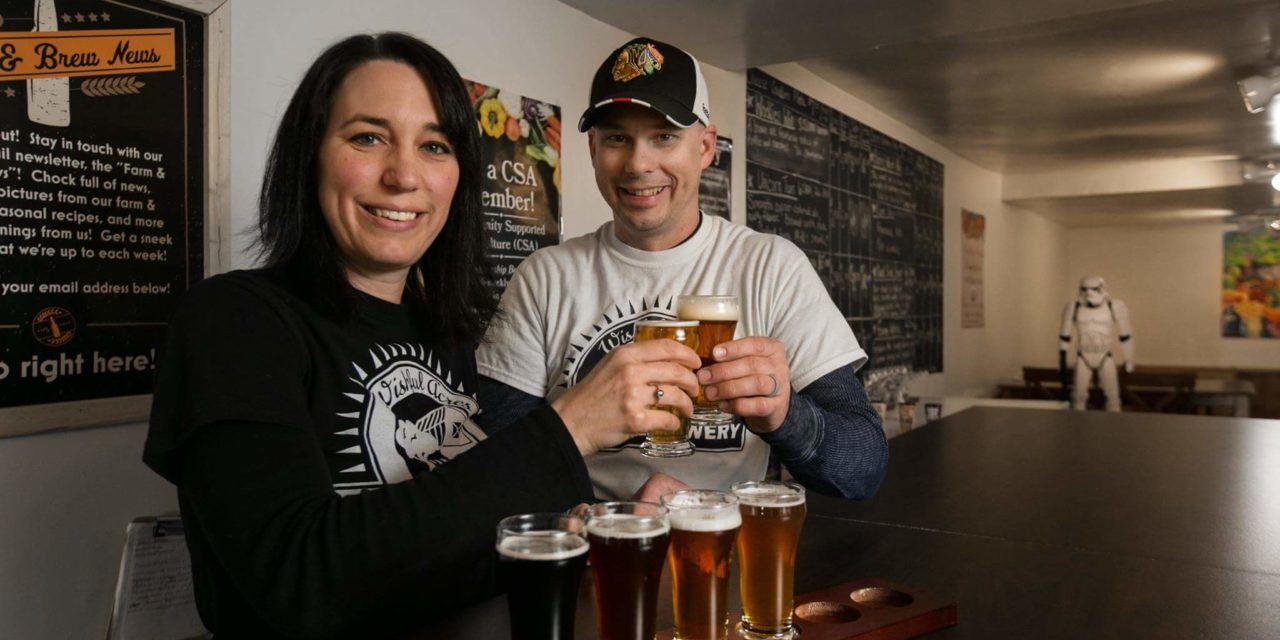 The beers served at Wishful Acres Farm & Brewery may be made from hops, herbs, apples and other produce grown on site — but the main ingredients in this family-owned business have been hard work, determination and skills Penny Peterson ’99 gained at Columbia College-Freeport.

Tucked in the northwest corner of Illinois, the three-year-old brewery is a favorite among locals and travelers alike — it has a perfect 5-star rating on both TripAdvisor and Yelp. Besides serving unique brews, Peterson operates a Community Supported Agriculture (CSA) program that allows members to purchase organic vegetables and fruits from the farm.

It’s an enterprise the couple wished for over a decade ago. 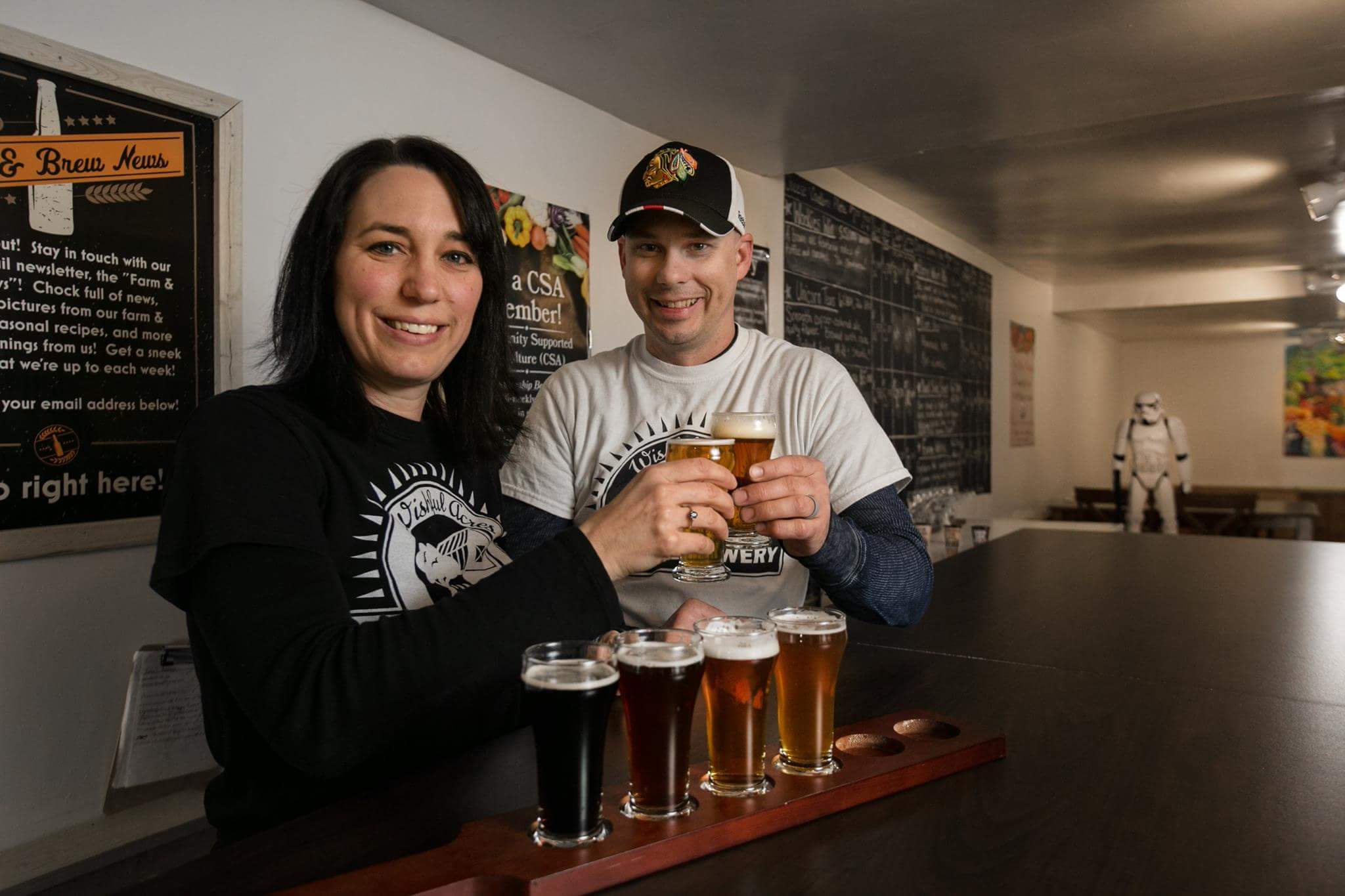 Penny Peterson ’99 and her husband, Nate, enjoy a pint at their business, Wishful Acres.

“We came up with Wishful Acres Farm since we wished for a farm of our own,” Peterson says.

But it’s taken a lot more than wishing to make the operation a reality. For Peterson, it began with an introduction to business.

“Columbia College had recently started the program in Freeport and only offered a couple of degree options,” says Peterson, who transferred with an associate degree. “One was business administration — something I had not even considered before.”

She put her degree to use after graduation, working for a magazine publishing company until her first son was born in 2003. That’s when she discovered her true passion. 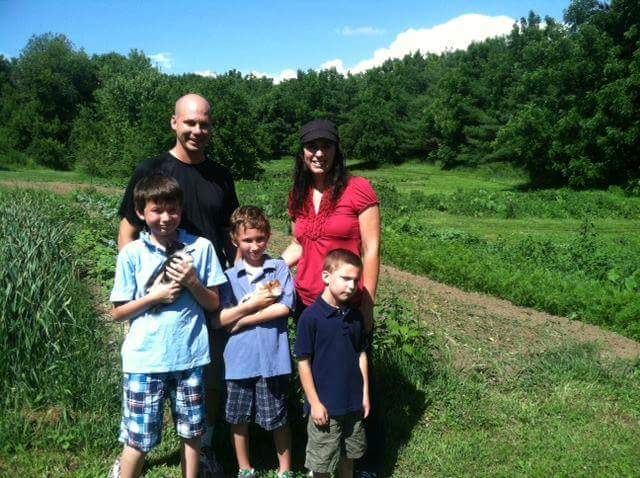 “After my son was born, I became very interested in healthy eating, rural living and the local foods movement,” she says. “I visited farmers’ markets a lot, and got to know some of the farmers well.”

Peterson quit the publishing industry to stay home and focus on creating a sustainable lifestyle for her and her family. That meant growing her own produce in a backyard garden and encouraging her husband, Nate, to brew beer at home.

“I was always looking for ways to be more frugal and self-sufficient,” she says. “I told my husband there must be a way to make your own beer. I researched it, and sure enough we learned how. I bought him his first homebrew beer kit in 2008, and he’s been loving brewing beer ever since.”

Peterson took farming to another level in 2009 when she rented land from an organic farm and began selling produce at farmers’ markets. Two years later, the Petersons purchased their farm through a foreclosure sale. The property had been vacant for years, except for a family of raccoons living in the attic of one of the buildings, and the excessive clean-up process took a year.

In 2012, Peterson ramped up her business, adding chickens, pigs, goats and an on-site farm store.

Then a drought hit and significantly diminished both her yields and her business.

“The crops weren’t producing enough, and some varieties were just flat out dying, and I didn’t have enough,” she says. “The CSA members had all pre-paid for their food. I knew I had to serve them first. So I ended up closing our on-site farm store, pulling out of farmers’ markets and just focusing on filling the CSA shares for the rest of the season.”

When the Petersons brought Nate’s brewing skills to the farm, business started to boom. The brewery and taproom opened in 2016, and Wishful Acres has flourished ever since.

“We never expected it to take off like it did,” Peterson says. “We blew through our five-year business plan in fewer than two years.”

Not too young, not too old

The pros and cons of summer courses

Nate has since been able to quit his warehouse job and become a full-time brewer, and his creativity at the barrels keeps customers coming back. Patrons can expect year-round standards such as Honey Wheat as well as surprising new flavors each month — brews such as Peanut Butter Stout and Cinnamon Toast Crunch. Seasonal flavors also take a twist with brews including Jack-O-Java Pumpkin and Candy Cane Stout.

“I think Nate has brewed close to 100 different beers since we opened,” Peterson says. “We release new beers each month, so there is always something new.”

The Petersons have expanded the operation every year since opening and continue to do so today. They recently upgraded the seating area in the taproom, and this winter plan to increase cold storage capacity.

Taps run in the
cougar family

In the Winter 2018 issue of Affinity magazine, We profiled Judson Ball ’07 and Logboat Brewing Co., — located just down the street from Columbia College’s Main Campus — as well as Kevin Lemp ’02, who founded 4 Hands Brewing Co. in St. Louis.

It’s a wish-come-true built on a foundation Peterson found at Columbia College-Freeport.

“My accounting, management, economics, marketing and finance classes taught me skills I use on a daily basis,” Peterson says. “I honestly don’t think I ever would have started my own business, and certainly wouldn’t have been as successful at it, if I didn’t have the business degree from Columbia College.”