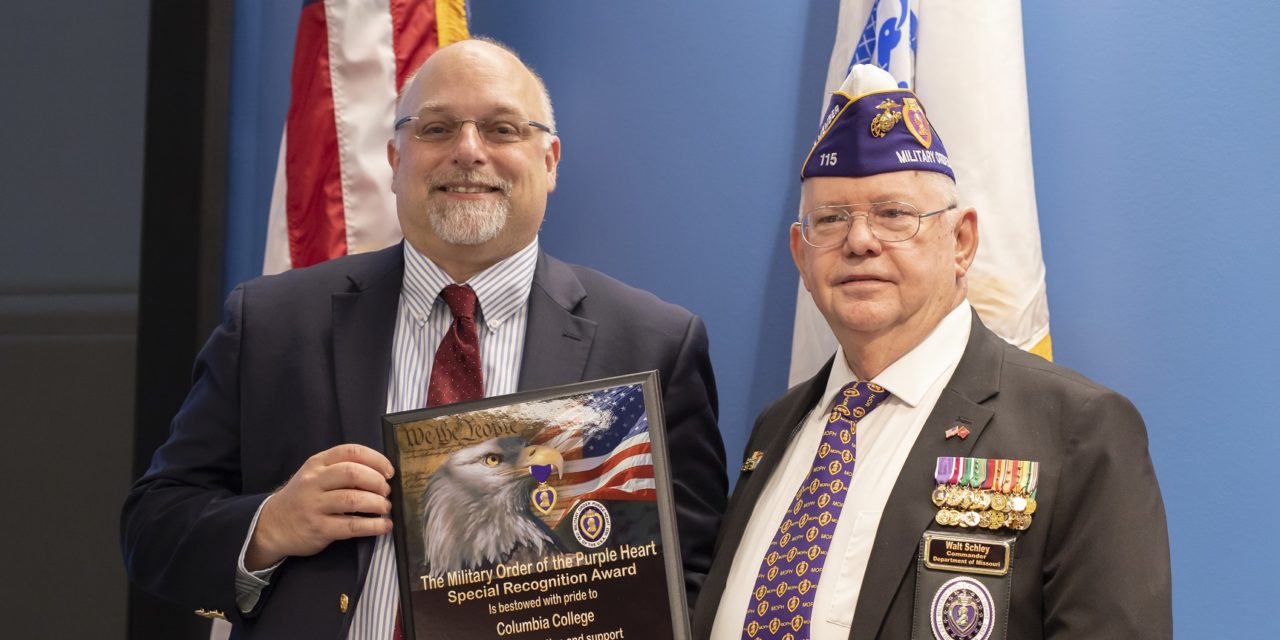 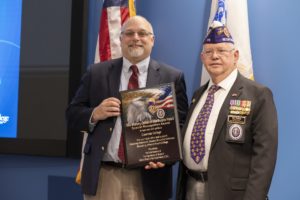 Columbia College President Dr. Scott Dalrymple (left) and Walt Schley, Commander of the Missouri chapter of the Military Order of the Purple Heart

A number of traditional ceremonies, and special recognition for Columbia College as a Purple Heart College, highlighted the school’s annual Veterans Week festivities.

On Wednesday, Nov. 6, officials from The Military Order of the Purple Heart joined Columbia College President Dr. Scott Dalrymple in a dedication ceremony recognizing the college as the 58th institution to be designated as a Purple Heart University.

The designation, awarded “for honoring the service and sacrifice of our nation’s men and women in uniform wounded or killed by the enemy while serving to protect the freedoms enjoyed by all Americans,” further cements Columbia College as a military-friendly institution. The college is an annual member of the Military Times “Best For Vets: College” rankings, as well as regularly appearing on the Military Friendly® official list of colleges and universities around the country. In 2018, Columbia College educated more than 7,000 active-duty service members, veterans, or their dependents at 36 locations around the country and via its online education program.

Originally awarded as the Badge of Military Merit by General George Washington in 1782, the Purple Heart is the oldest U.S. military award still presented. General Douglas MacArthur revived the award and renamed it the Purple Heart on the 150th anniversary of Washington’s creation in 1932; it is now presented to service members of the United States Armed Forces who have been wounded or made the ultimate sacrifice in combat. More than 1.9 million Purple Hearts have since been awarded.

“It’s a wonderful honor, and we’re proud to serve our student veterans,” said Dalrymple. “It’s not just a day or a week for us, but we continue to make sure that we spend more than a day honoring those who have served our country, and this ceremony is one important piece of that.”

During the ceremony, Dalrymple also announced that the college is renovating a building at 904 N. Eighth Street to serve as the new home of the Ousley Veterans Service Center, and it will be named for famed Tuskegee Airman and Columbia College alumnus, Col. Charles McGee ’78, Hon. ’14. “We’re honored to call him an alumnus of Columbia College, and we’re honored by how gracious, humane and decent he is; he’s just a fantastic human being, and a model for all of us.”

Veterans Week activities culminated on Monday, Nov. 11, Veterans Day, beginning with an honor-guard raising of the American and Columbia College flags not long after sunrise. Later that morning, Senior Director of Military & Veterans Services Keith Glindemann presided over the college’s annual remembrance of our nation’s service members who have been killed while fighting in the Global War on Terror. Thirty-seven Americans have died since Veterans Day 2018, and their names were read in a solemn ceremony by a pair of Columbia College employee veterans. Systems Analyst Jen Boyt, an Iraq veteran of the Army National Guard, and Evening Program Associate Director William Bushnell, a retired Navy lieutenant commander, brought the list of names since 2001 up to 6,993.

At the conclusion of the day, retired Army Lt. Col. Rob Boone, associate vice president for Columbia College Global-Military, presided over the annual lighting of the Military Service Tree located outside of Dorsey Hall.

“The Purple Heart College designation is a clear indication of our continued support of our veterans,” said Boone. “Columbia College has had an enduring relationship with all branches of service since 1973. Our commitment to the military has never wavered, and it never will.”

To support scholarships awarded to our student veterans, or the Columbia College Fund, which supports the college’s current greatest needs, please give now. 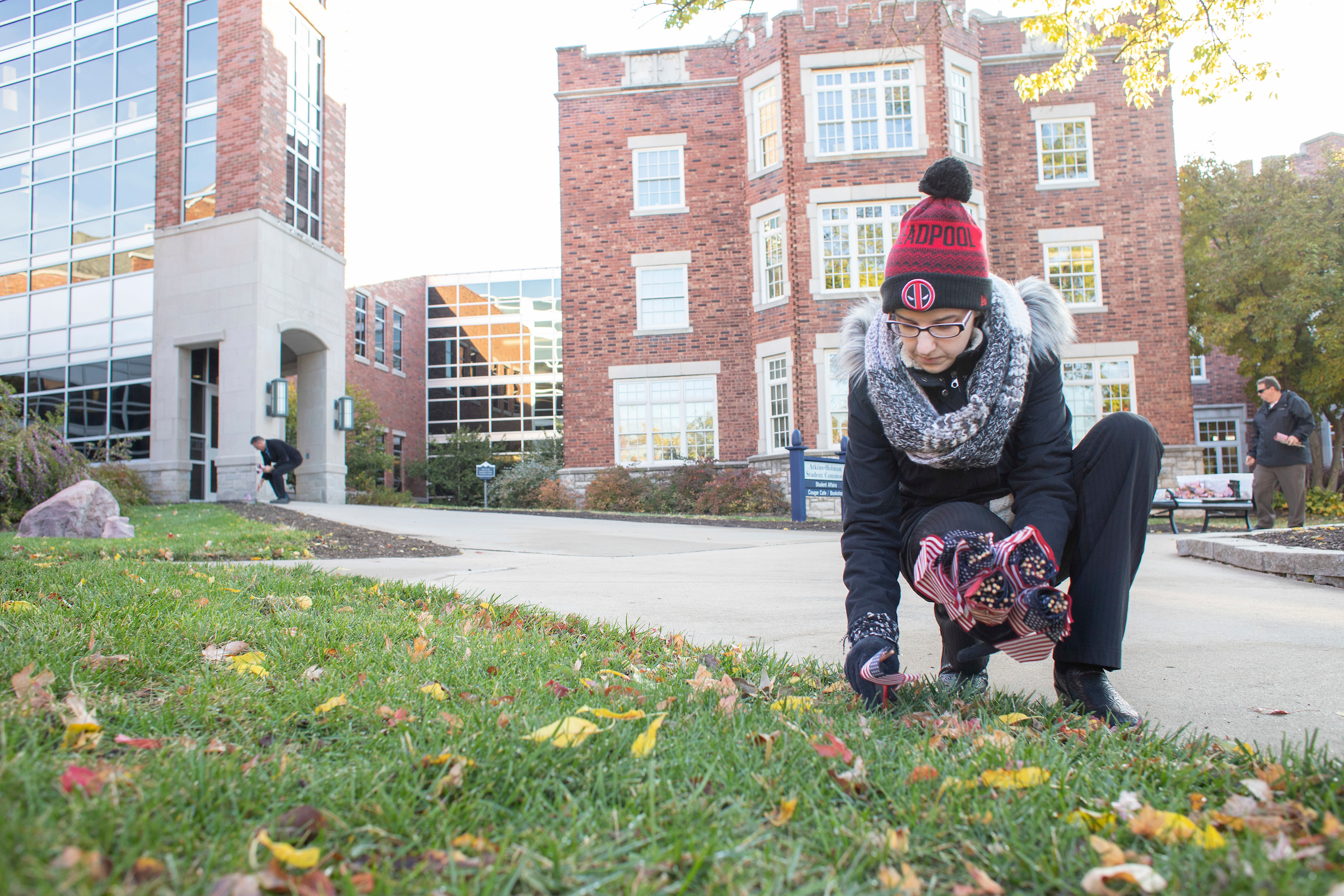 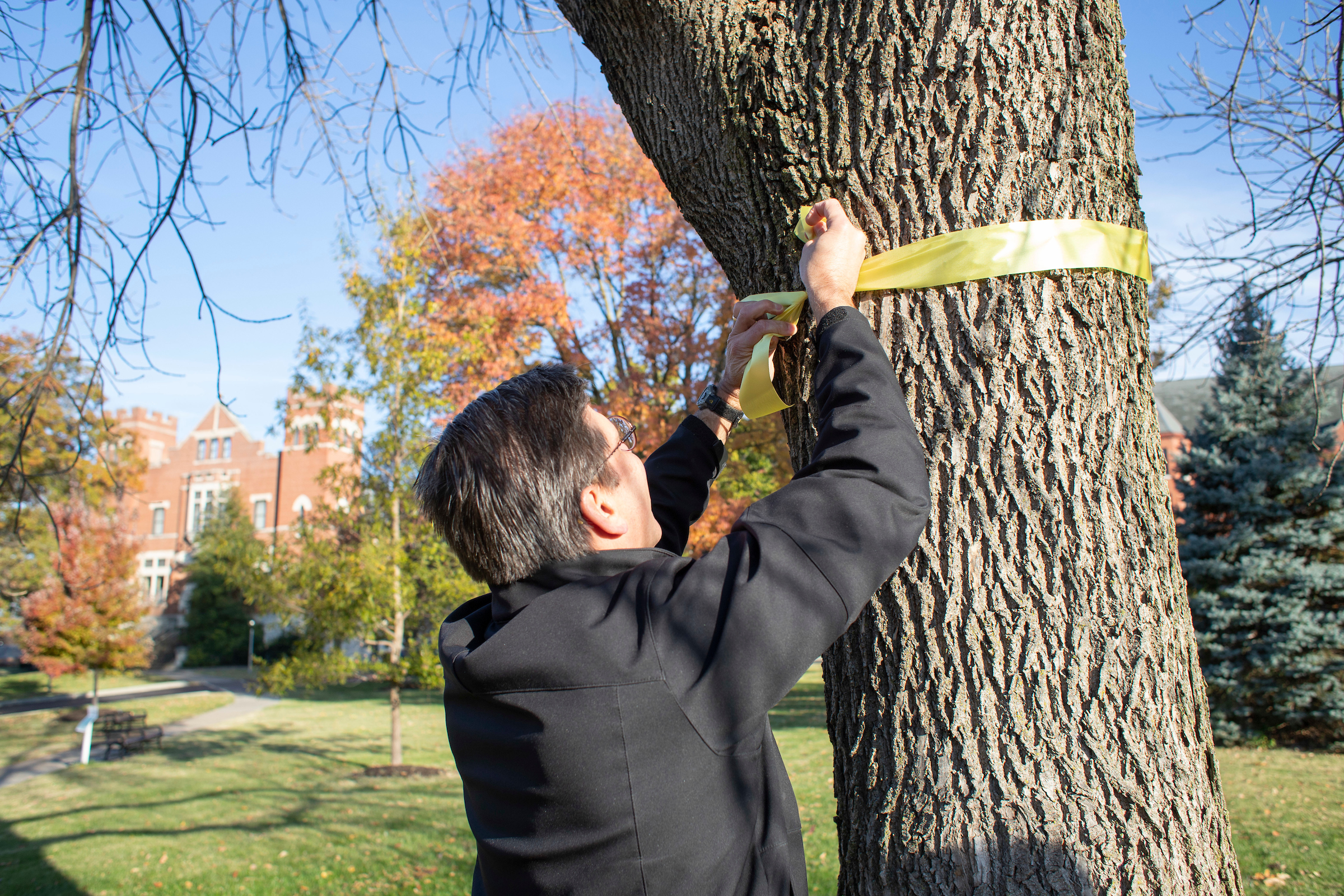 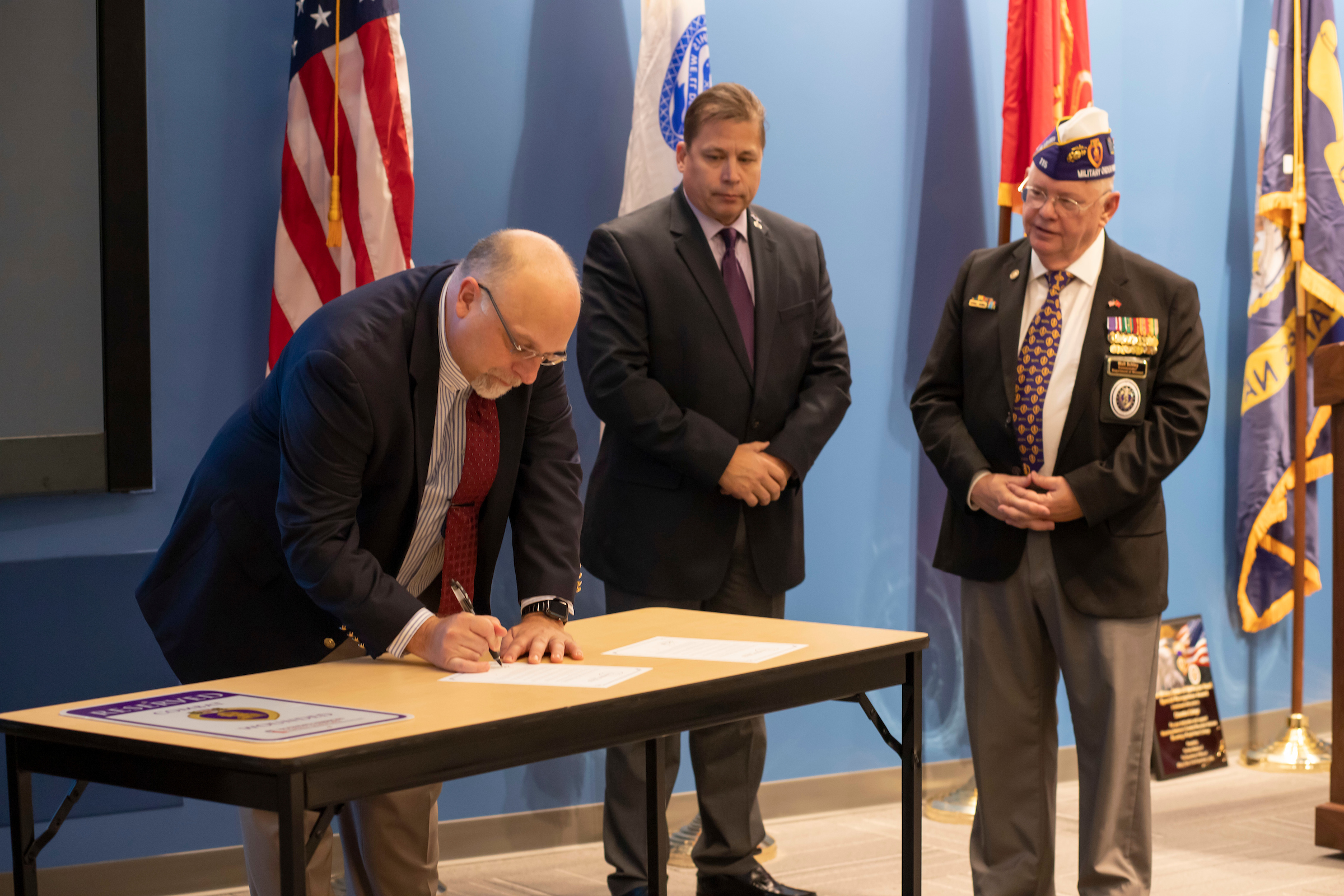 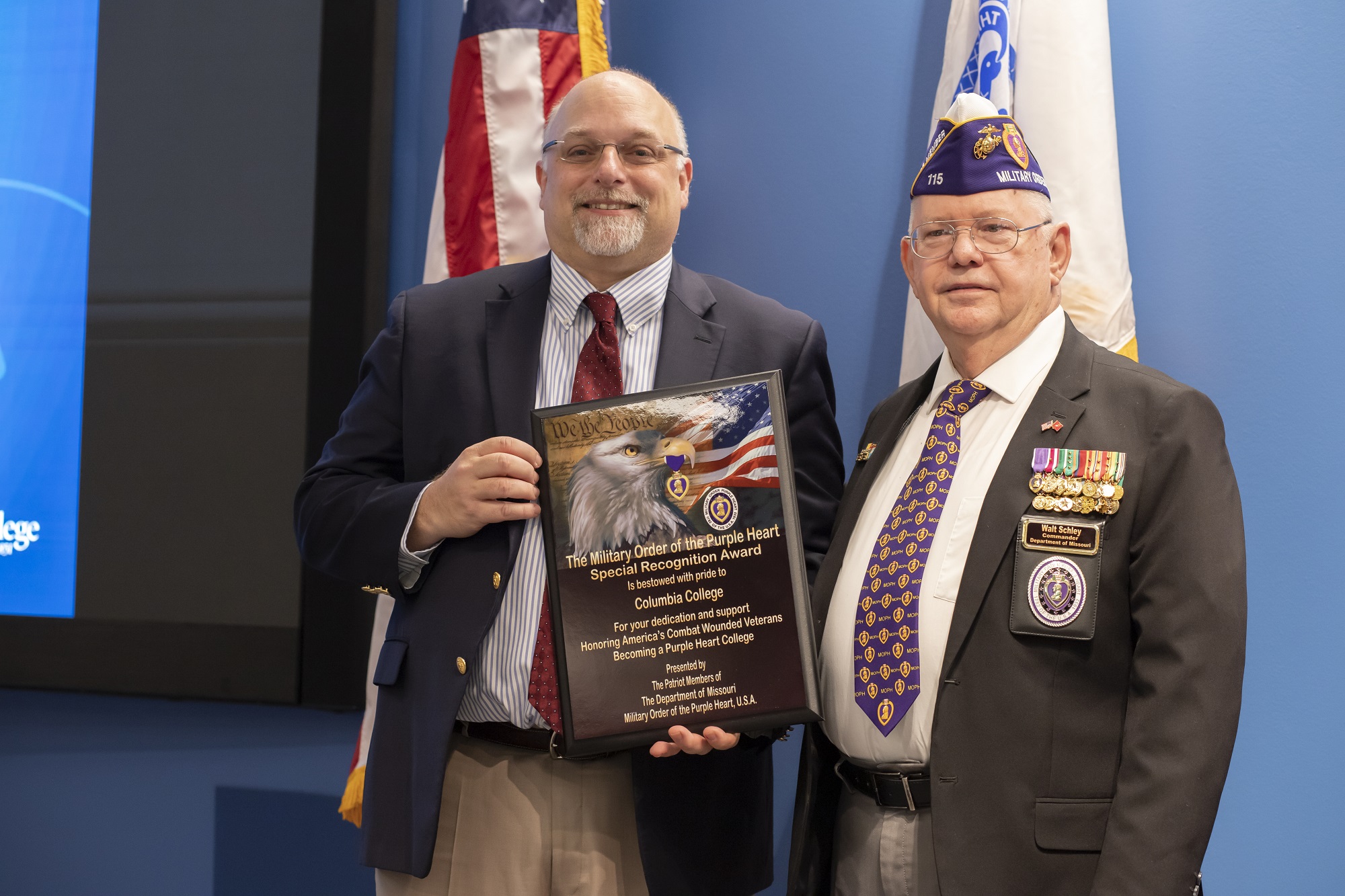 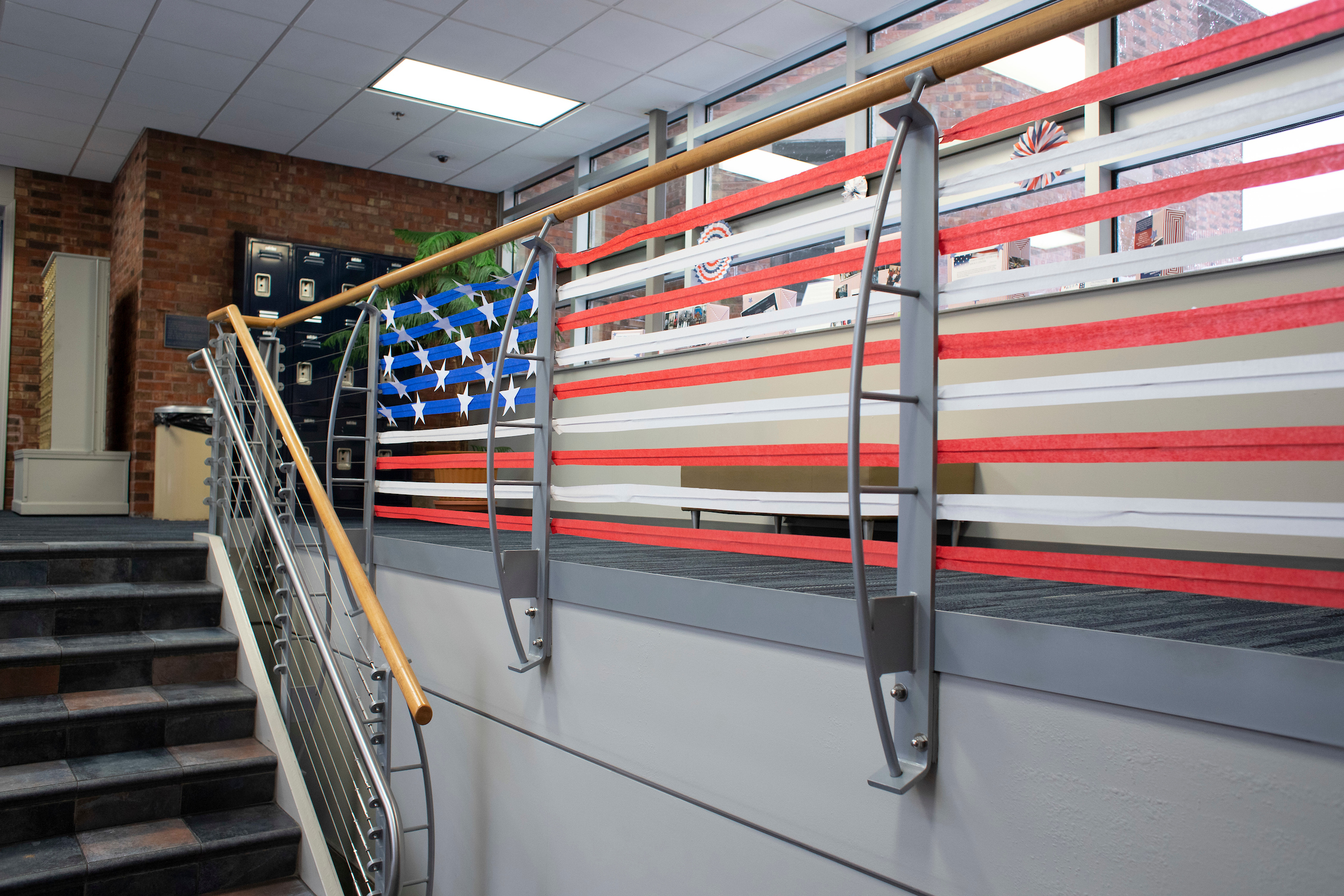 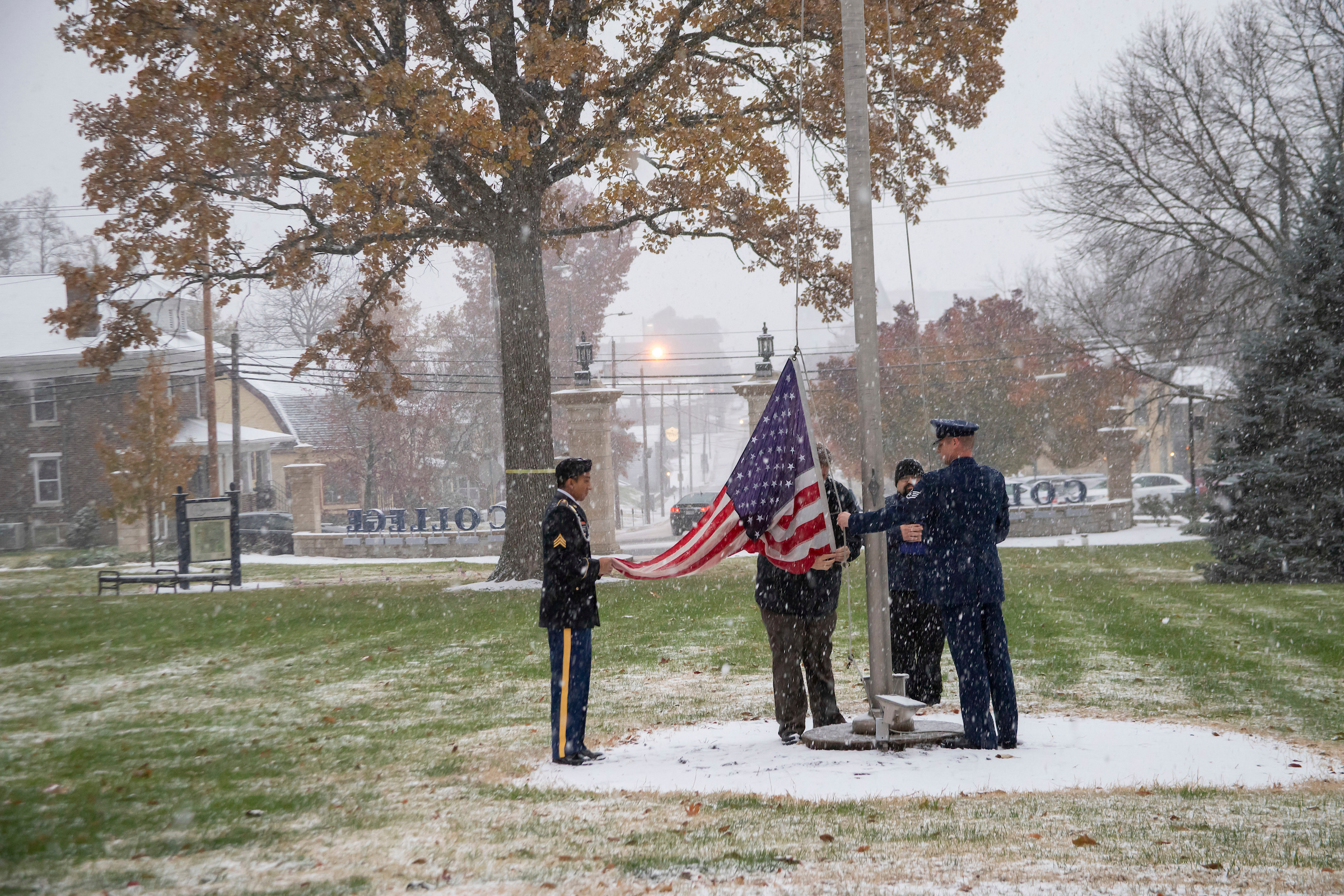 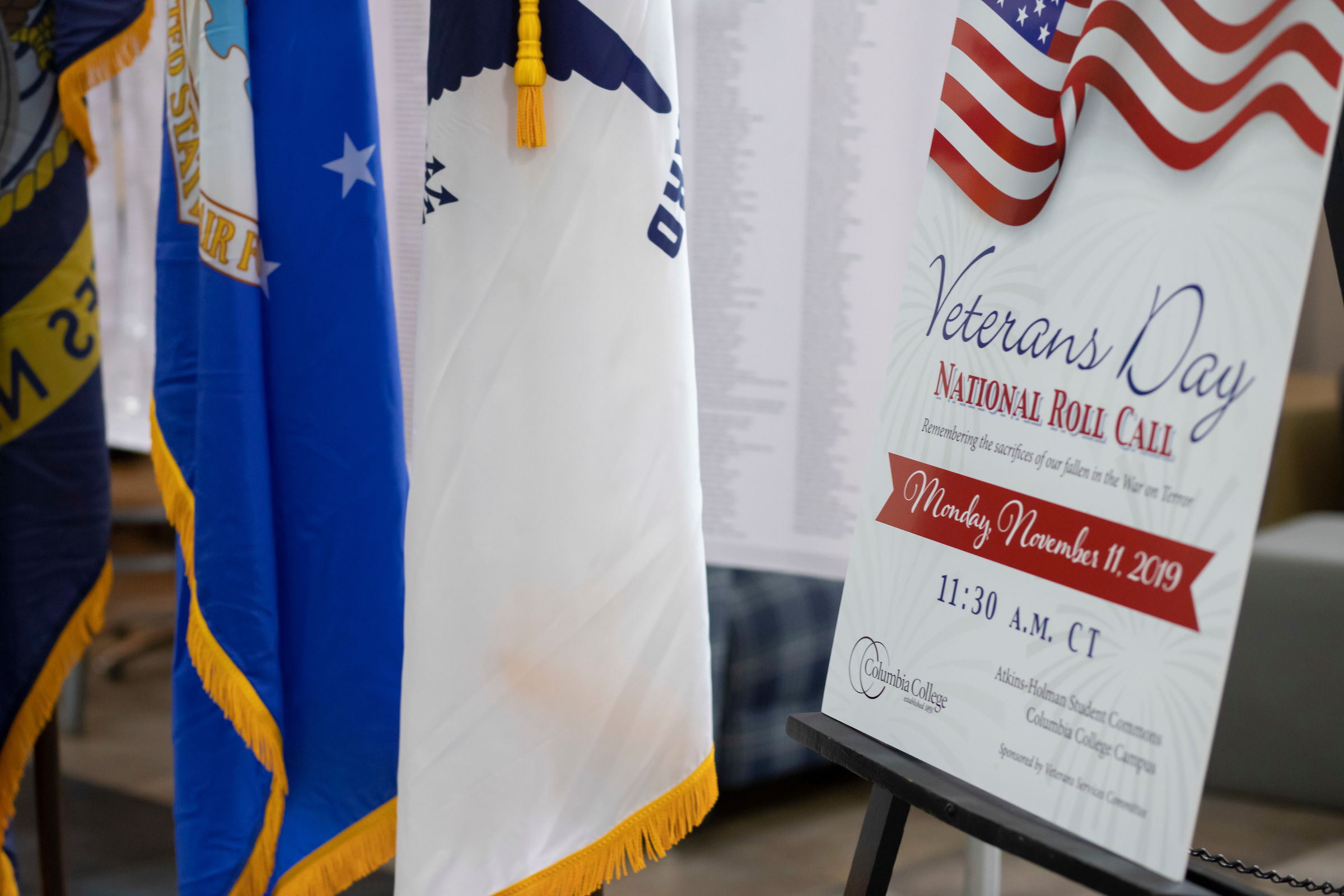 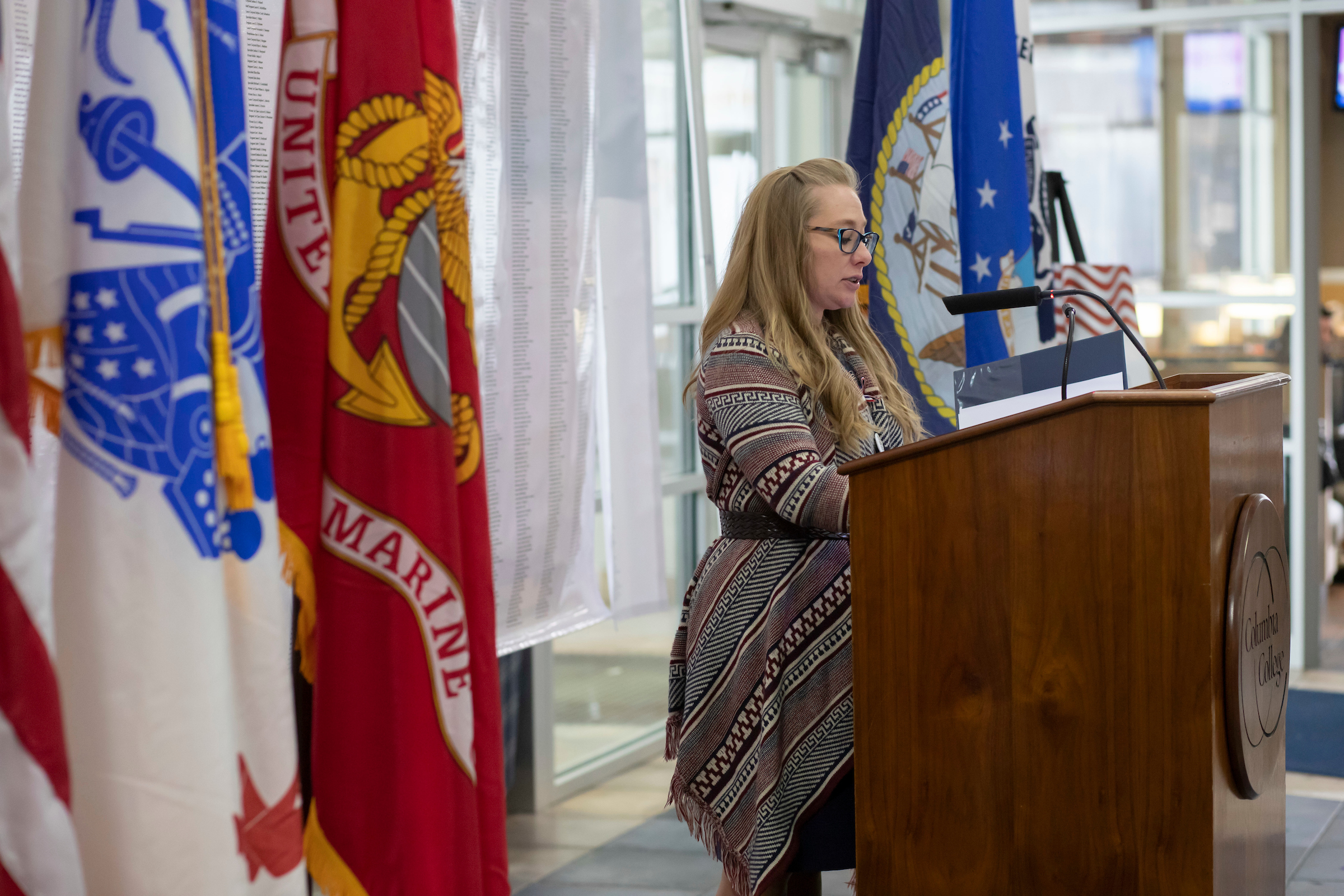 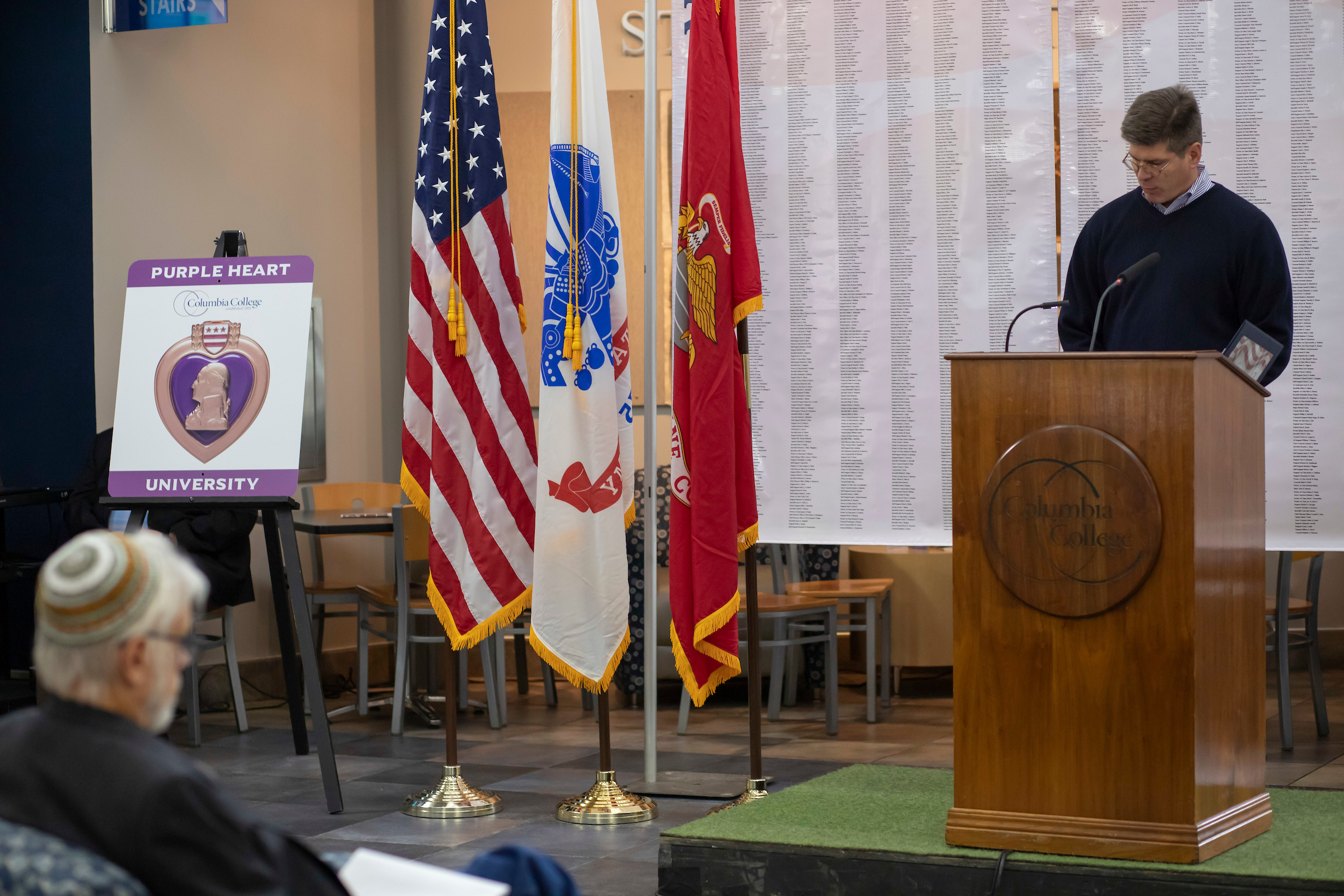 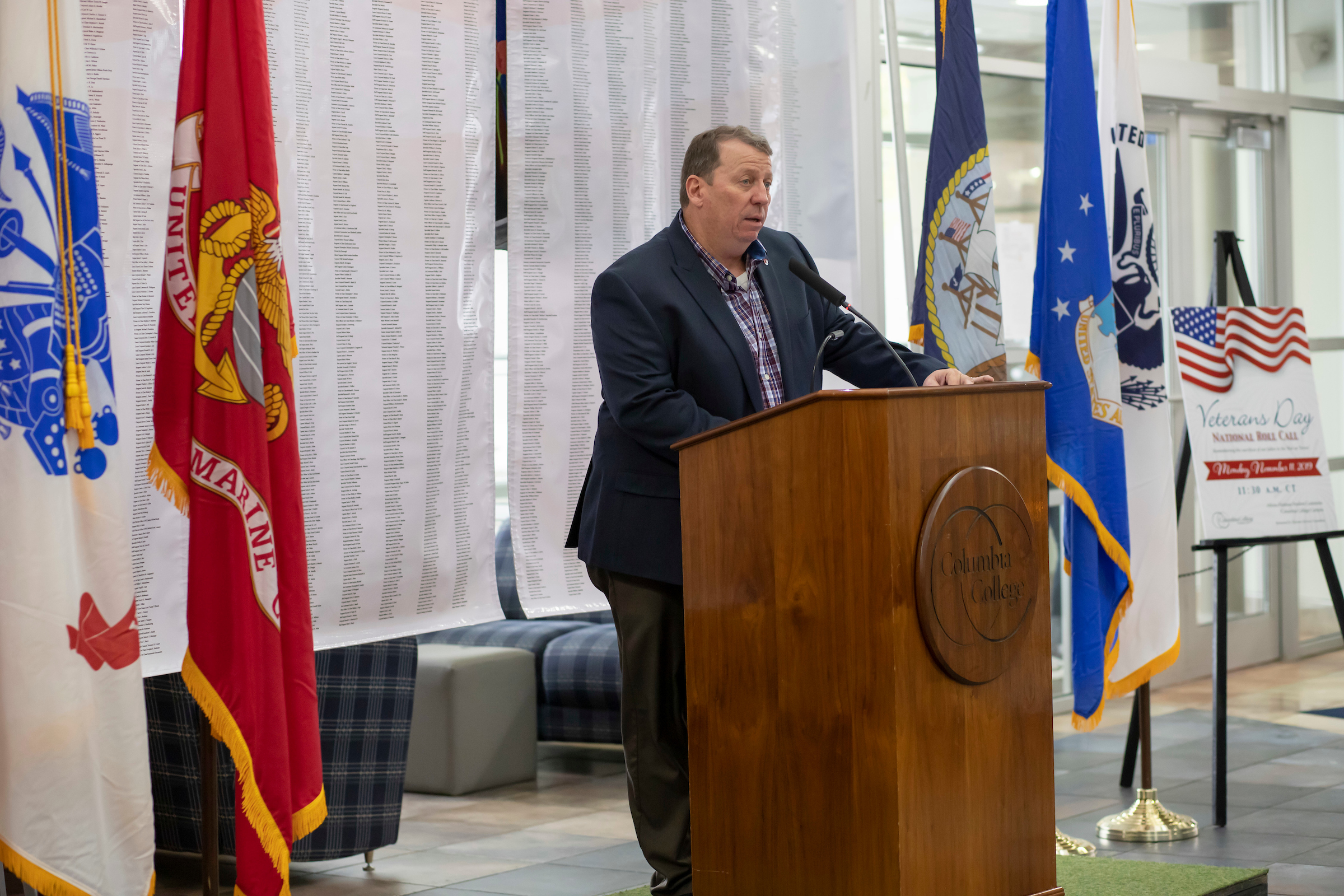 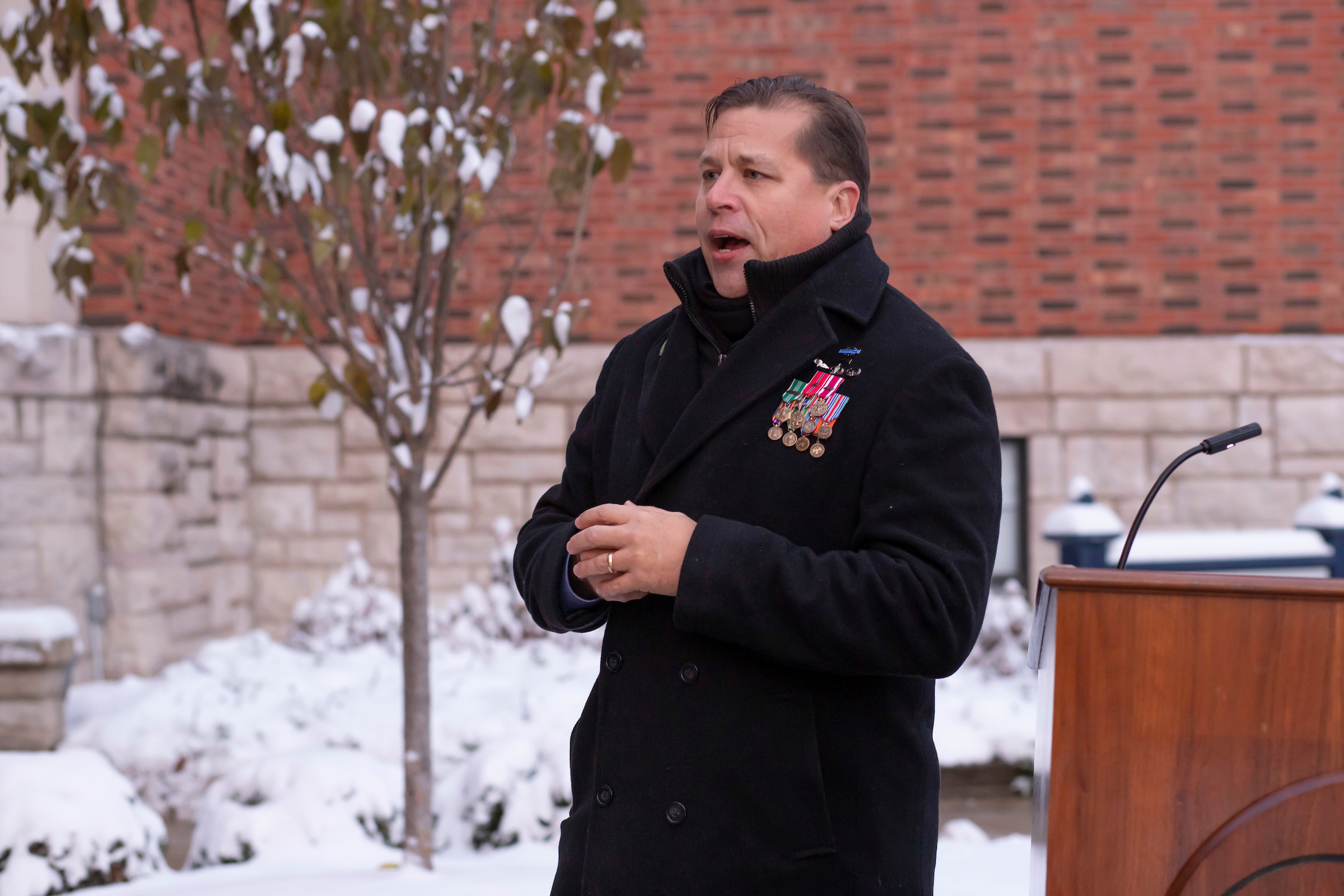 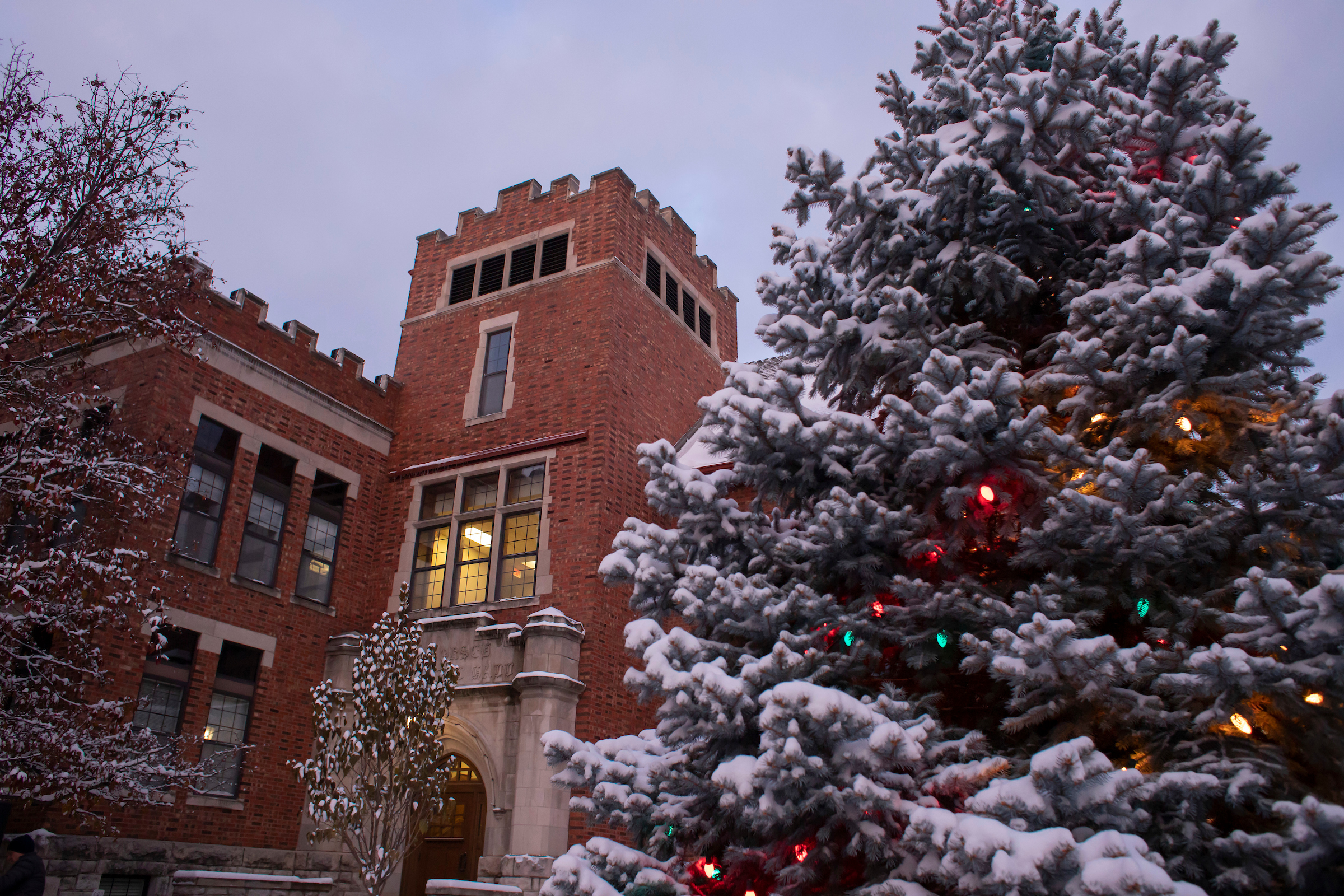