Evening Program celebrates 45 years of service to the adult learner 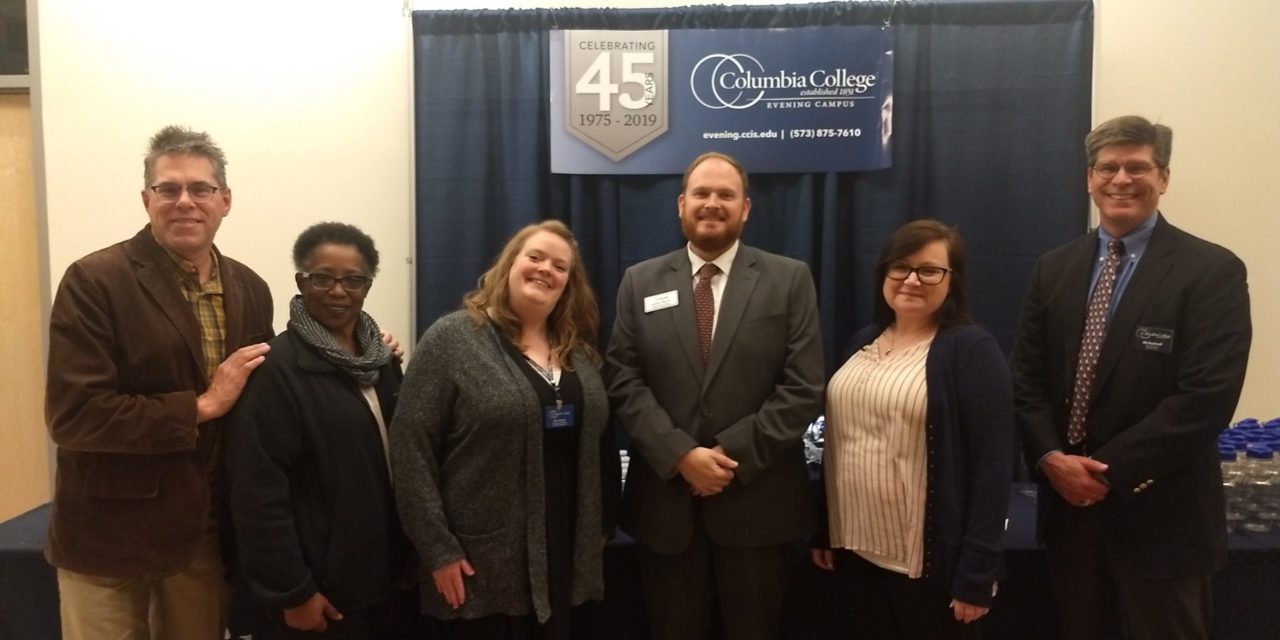 Columbia College has been educating the best and brightest from around the country for more than 168 years. Since March 3, 1975, the college has provided a valuable service to mid-Missouri by offering classes specifically designed for the non-traditional student.

While the Evening program doesn’t officially celebrate its 45th anniversary until March, officials held a celebration just prior to finals week to commemorate the milestone.

“The college started this program 45 years ago because it wanted to provide the opportunity for working adults to continue their education,” said Andrew Reeves, regional director of the Evening program. “Even though times have changed since 1975, the need for serving the non-traditional student hasn’t.”   By 1983, author and longtime Columbia College professor Polly Batterson notes that 85 percent of Evening students lived in Boone County, but that some drove for an hour or more to take classes. In her book, Columbia College: 150 Years of Courage, Commitment, and Change, Batterson adds that by 1994, Evening enrollment nearly tripled to 1,148 students. “The college prospered in an environment that had caused 62 colleges in Missouri to fail since 1851,” she wrote.

Batterson lists “a coterie of long-serving adjunct faculty members” in describing the growth of the Evening program. One of the popular instructors mentioned is Lisa Isaacson, who has taught philosophy and religion for 33 of the program’s 45 years of existence.

“It was on a lark that I got the job!” Isaacson exclaimed at the anniversary celebration. “I thought it was a one-time thing, and they kept having me back. They would let me teach anything that I would make up a course for, so when folks ask, ‘What do you teach?’ Anything they’ll let me teach!”

Earlier this month, we invited our Evening Program alumni to share some of their memories; here are just a few of them:

“I am proud to be an alumnus of the Columbia College Evening Campus! At a time in my life where I had career/job and family obligations, being able to complete my degree in the evening in Columbia was a huge blessing and a launch pad for everything I have done since that time. Congratulations on being the best college, a true leader in Higher Education and making a difference in people’s lives.”
— John Ney ’89

“I attended Columbia College under the GI Bill in 1975, and received my diploma in 1978. I will say Columbia College went above and beyond to help me get my diploma. Any time I had an issue with getting my check from the VA the school said they would help me get it straightened out, and they did. The instructors/teachers understood we had full-time jobs, so they didn’t pile homework on us. They knew some of us came from out of town – I drove three nights a week from Jefferson City – so they understood we could be late to class. What I’m trying to say is they helped us succeed. I’ve tried to pay them back in what small way I could by establishing the Ousley Family Veterans Service Center there. Thank you, Columbia College.”
— George Ousley ’78

Since 1975, Columbia’s oldest evening program has graduated 9,405 alumni, including 1,254 who have earned graduate degrees.

Preston Bass ’78 had begun working as an officer for the Columbia Police Department in 1974, and wanted to enhance his training and further understand the entire criminal-justice system. So after his shift ended, he’d say goodbye to his wife and child – with a second on the way – and attend night classes at Columbia College. After several years, Bass earned both associate and bachelor’s degrees in administration of justice (now known as criminal justice). “My instruction just meshed together with my training, and it was a great benefit to me personally,” Bass said.

Bass has kept an eye on Columbia College through the years, especially now in retirement following 20 years of service to CPD, and another 17 years as coordinator of safety and security with Columbia Public Schools. He made the point that – from the integration of men and the transition to a four-year curriculum, to the creation of courses taught online, to even the recent partnership with the National Association of REALTORS® – the establishment of the Evening program was just one of many innovative decisions the college’s leaders have made over the years.

“I sincerely mean this, and of course I’m biased, but this has been one of the most innovative institutions that I know of,” Bass said. “They just continue to growing and provide opportunities for members of the community that want to try to get an education.”

Vicky Brooks has served as an instructor for the Evening program since the fall of 1988, and she has as much enthusiasm for educating today’s adult learners as ever. “We really meet a need, and that’s why I love it. The students are so, so special,” Brooks says. “I’ve seen huge transformations – you talk about people that come back to school who are scared, they don’t think they can do it – those become some of my best students.

“There’s always been a commitment to bring the highest-quality education instruction to our students that we can humanly possibly give, and that’s what draws me in,” she said. “I want the students to have an amazing experience; I want it to be transformative.”

With no fees, no book costs and no surprises thanks to Truition®, you can apply now for free and start the next Evening program session on Monday, Jan. 6.