Graduates take many paths to one destination 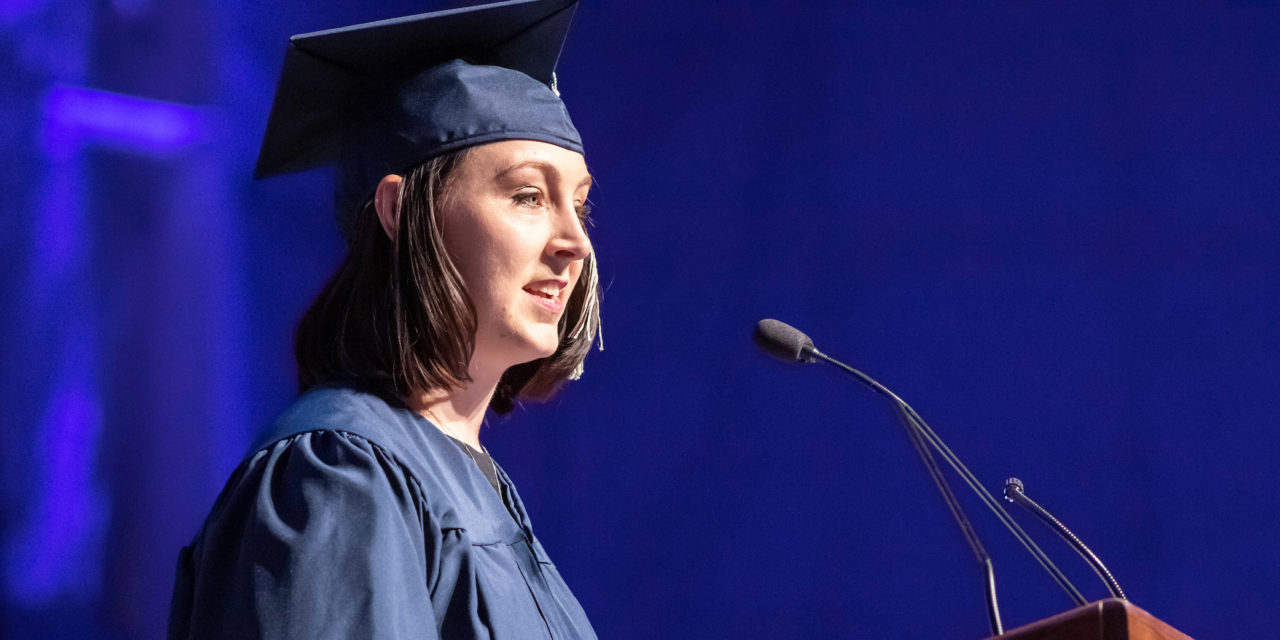 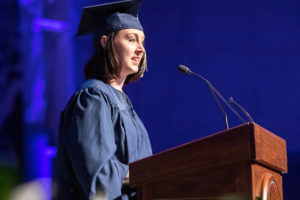 Every graduate’s story is unique, and each one of them is captivating.

Some of them are simple, like the family who decided last Saturday’s commencement was worthy of a tailgate in the parking lot outside of the Southwell Complex to celebrate their first-generation graduate earning her master’s degree.

Others need more encouragement, such as the invitation Dr. Scott Dalrymple gave during his opening remarks for families to whoop and holler in congratulations of their loved ones’ academic accomplishments.

No matter the occasion, here are some of their stories.

On Saturday, Fehl earned her MBA from Columbia College. She not only walked across the stage, but also stood on it to serve as the day’s commencement speaker. As she began her address, Fehl informed the Southwell audience that Fehl loosely translates to “failure” in her family’s German heritage.

Failure – and learning from it to achieve your true potential, in line with Columbia College’s mission – was an integral part of her speech. She pointed out that 80 percent of small businesses fail, and her parents’ entrepreneurial efforts were included in that total. She also noted Thomas Edison’s frequent failures and education from them with his famous musing: “I have not failed. I’ve just found 10,000 ways that won’t work.”

During her time in the Army, Fehl was stationed in Vicenza, Italy, and served in Afghanistan, where she was awarded the Bronze Star. In her final role in the Army, Capt. Fehl served as the lead HR advisor for a unit of nearly 4,000 personnel dispersed in three locations in Italy and Germany and 18 locations across Afghanistan.

Upon her return to civilian life in Columbia, Fehl began drawing upon the entrepreneurial roots her parents had planted, and decided to embark on an MBA. She wanted a school with the flexibility to take classes both online and in-seat. That proved to be a wise decision, as Fehl nearly immediately was forced to relocate because of her job. “I ended up doing the entire program online, so it worked that I picked a program that was flexible enough to adjust to my life.”

Now a human resources professional in Raleigh, North Carolina, Rachael credits one of her marketing classes for fostering her entrepreneurial spirit. It’s there that she was given the encouragement and the push to move forward with her idea to open a food truck with her husband, Joel, a retired U.S. Army veteran and culinary school student. “I’m either going to realize that this is a really great idea, or a really terrible one. I did all the market research in the Raleigh area, and now I couldn’t be more excited.”

The road to graduation for Rachel Davis has been a long and winding road.

Now a marketing official with the Missouri Housing Development Commission’s home-ownership division, Davis dropped out of Jefferson City High School at the age of 15 because she was pregnant with her first child. But she got her GED, went to Metro Business College, and then secured a job with the State of Missouri. 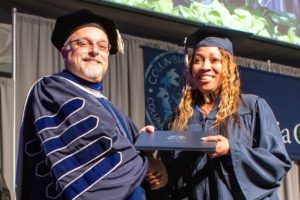 Davis was working with a woman who was going through night school while also raising a couple of children herself. “She was telling me about it, so I checked it out.” So now with two children of her own, Davis enrolled at Columbia College-Jefferson City in 1999, and by 2003 had earned her associate degree.

As she continued to progress toward her bachelor’s degree, life started happening, as Davis put it, in 2005. “My kids got older, I got cancer, and so I really didn’t think it was going to be possible.”

Yet in the last couple of years, the timing started to come together for Davis, especially once the youngest of her three children had gone off to college in California. “I thought, ‘Maybe I should,’ but then I thought, ‘oh, I’m old!’ – I’ve now been with the State of Missouri for 24 years, I’m almost eligible to retire!”

At that moment, the passion and joy on Davis’ face shined even brighter. “But it’s on my bucket list, you know?” Davis knew she was close to completing her degree, so she called officials at Columbia College-Kansas City to find out just how close.

She was 12 hours shy of earning a Bachelor of Science in Business Administration. “So I started in January, and here I am. I cannot believe it. I’m tickled pink,” Davis said.

“When I started back, I realized that I should have done this a while back! But I’m at the point in my life where I want to leave a legacy for my children. My life path might not have been straight, but no matter how far off you get, you can always come back.”

That legacy also includes a 4-year-old grandson. “As we were on our way over here for the ceremony, he said, ‘Mimi, I wanna graduate too!’ And I told him, you’re gonna do it!”

Another Columbia College graduate will soon be joining Fehl in North Carolina. 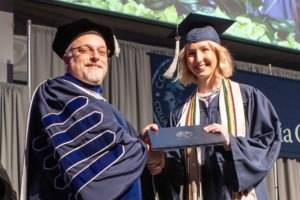 Brown was drawn to Columbia College both because of her brother, John, who attended 10 years earlier, but also because of the small class sizes. Madeline started at the University of Missouri, “and it was just so huge and overwhelming for me. Columbia College was more intimate, and I needed that one-on-one experience.”

She is quick to credit both Jefferson City Director Kim Bonine and Senior Academic Advisor Christine Reimund for her success. “I couldn’t say enough good things about Kim. She worked around the clock to help me, and Christine made herself available all the time. I love those two.” 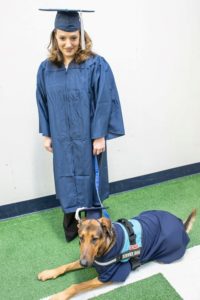 There were many mortar boards decorated to acknowledge graduates’ accomplishments on Saturday. Some quoted Dr. Seuss’ “Oh, the Places You’ll Go!” while others referenced the degree-recipient’s journey or destination.

One mortar board was smaller than all the others, and it was worn atop a head held proudly above four legs. “I HELPED HER! – SPARTACUS”

Genevieve Boner served in the Air Force for 13 years, and PTSD and anxiety were part of Boner’s return to civilian life. Eventually, so was Spartacus, who became certified to be Boner’s service dog.

Three years ago, her best friend, Mandy, pushed her to start going to school. “It’s because of her that I’m here. She’s been there with me through thick and thin, and she’s really helped me.” Boner took classes online in the summertime, and in-seat through the Evening program, and Spartacus was with her every step of the way. Saturday, she earned her Bachelor of Science in Biology, and later this month, she celebrates her first anniversary with her husband.

These stories are all unique, they’re the reason we do what we do here at Columbia College, and we can’t wait to see how they unfold from here. 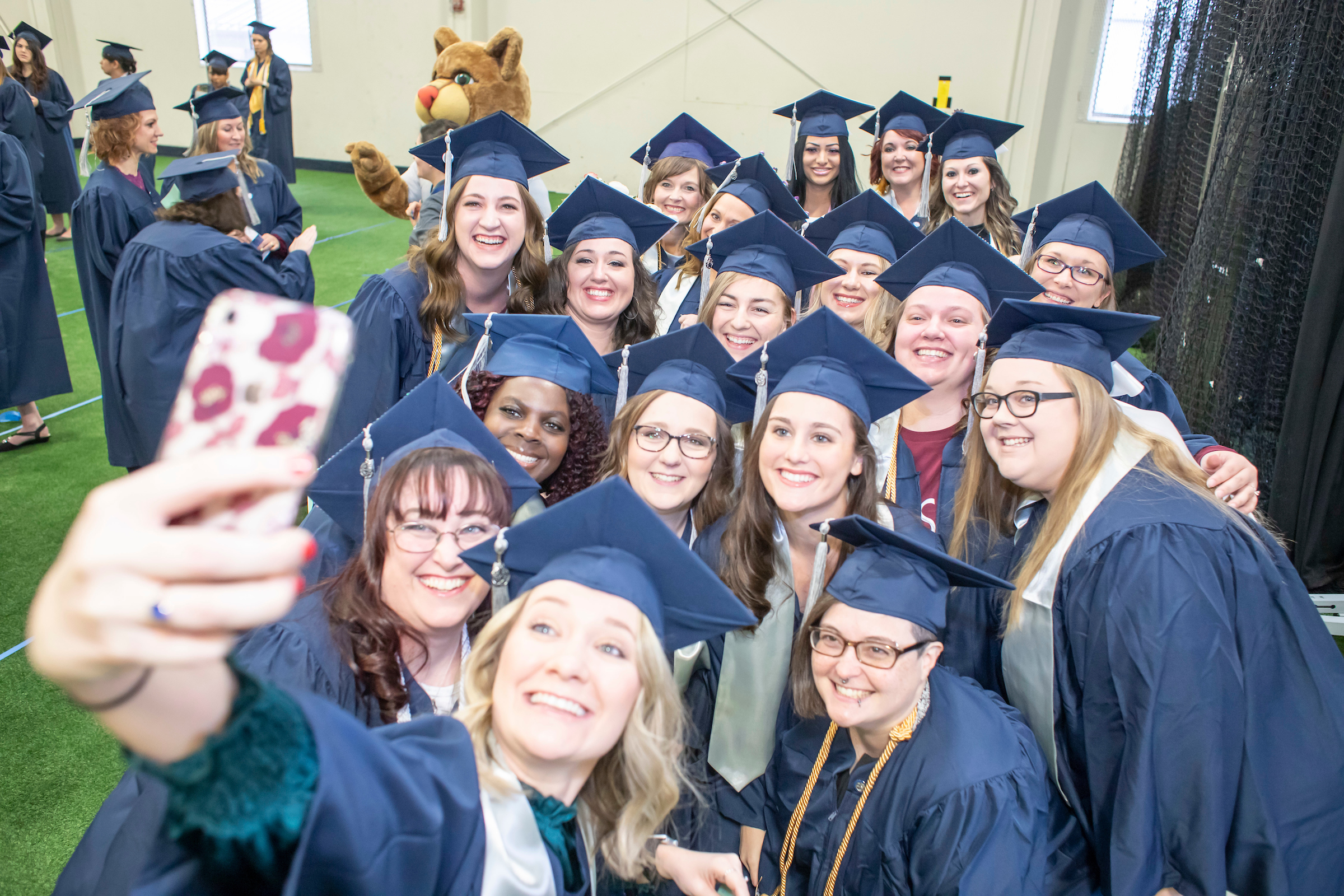 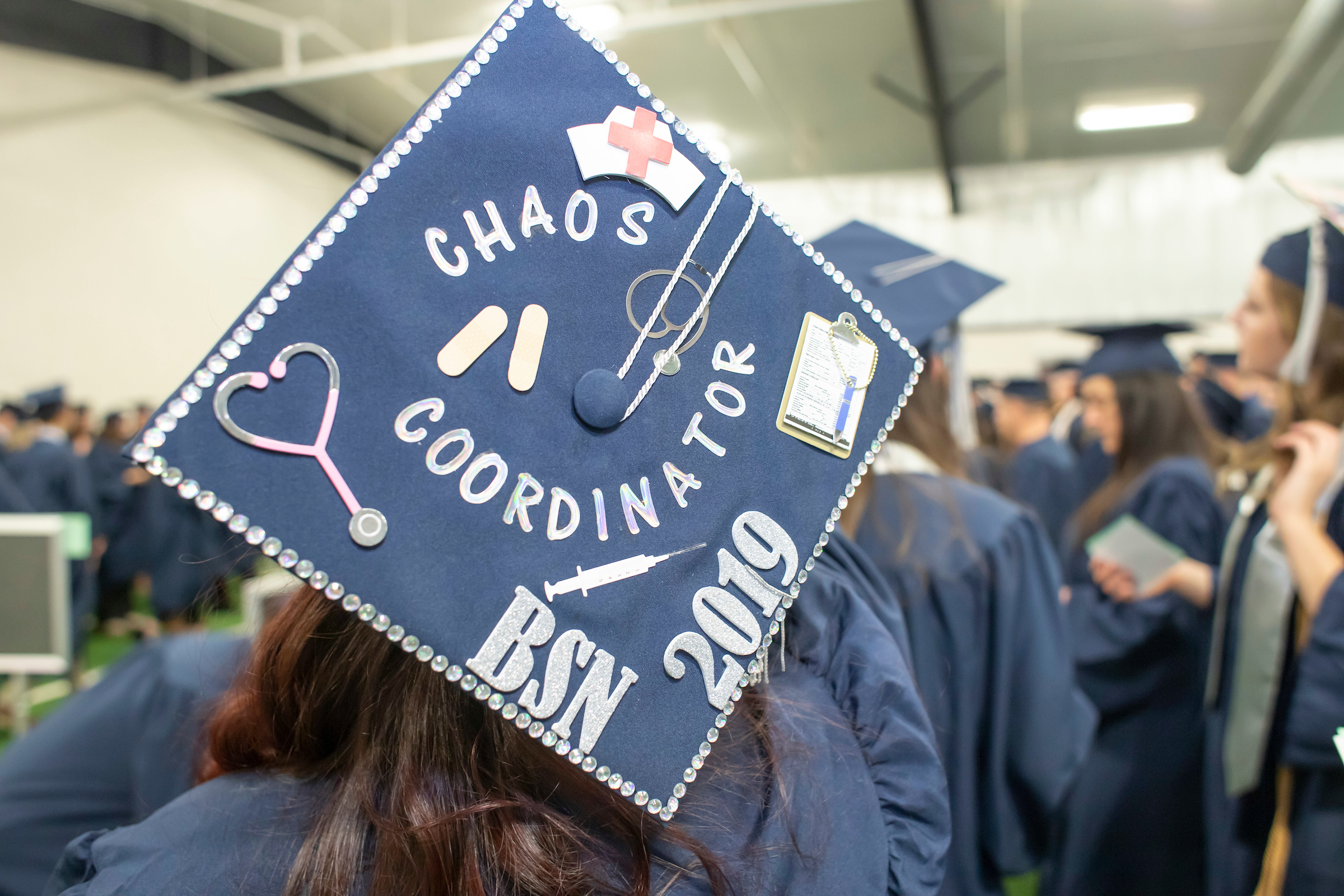 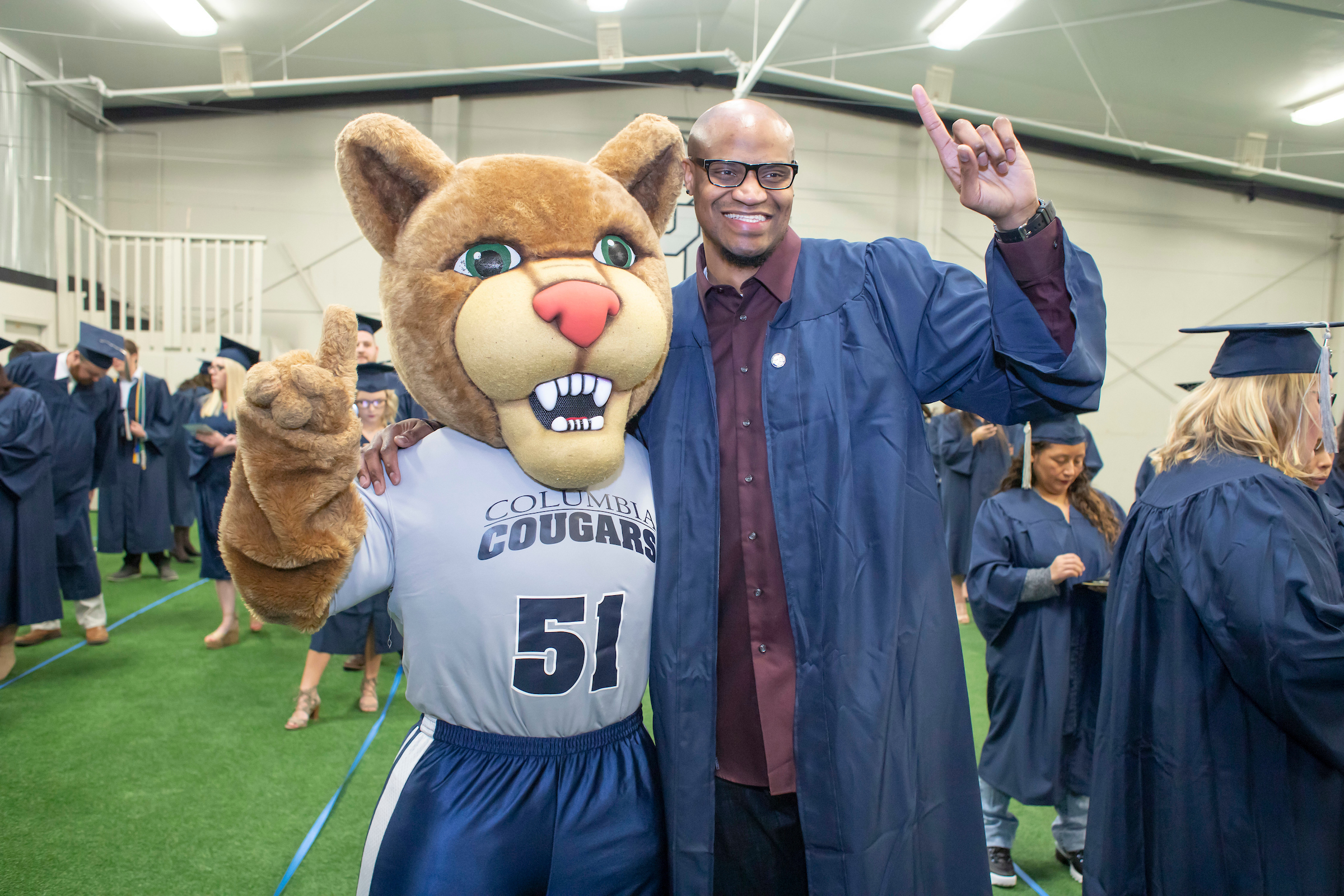 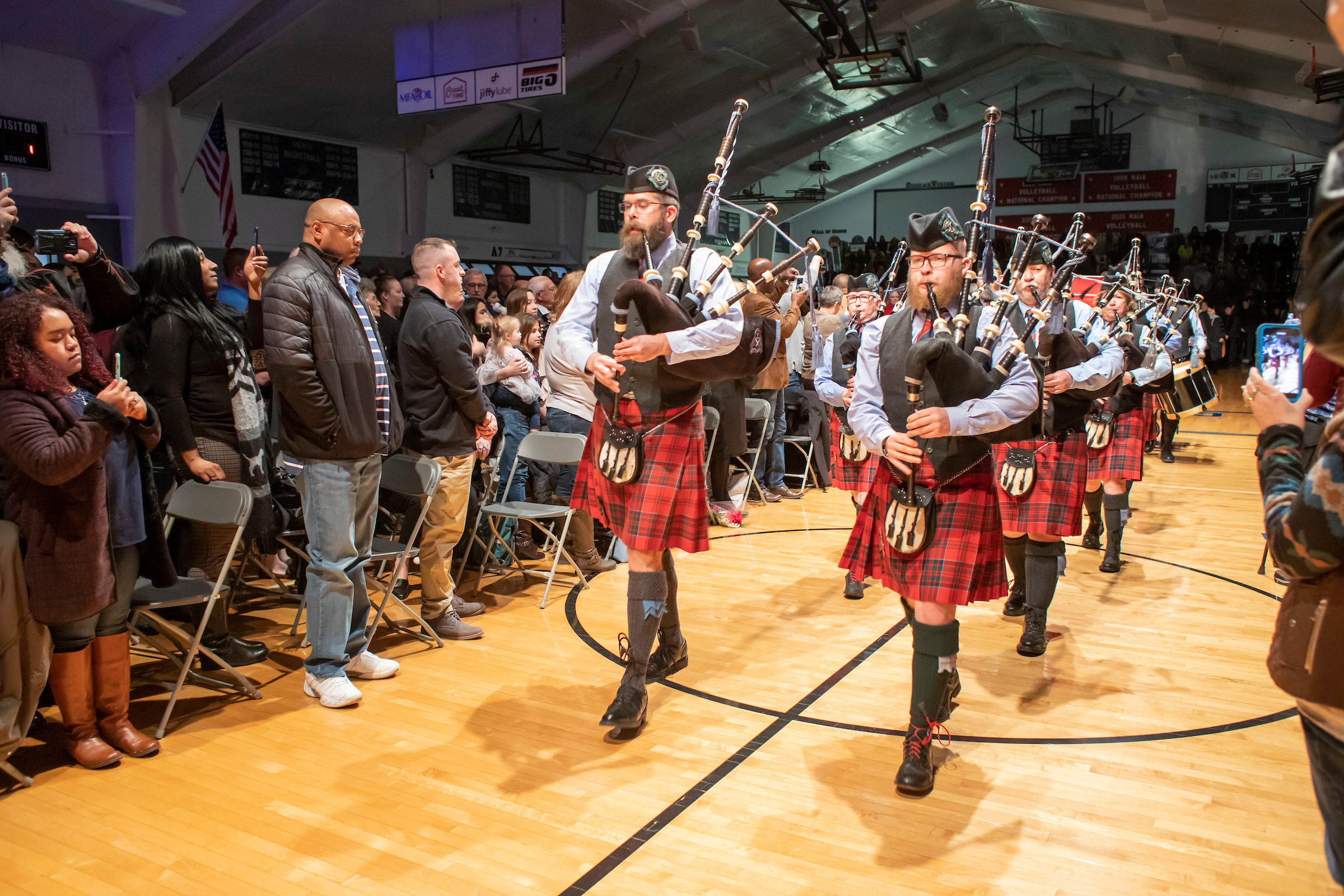 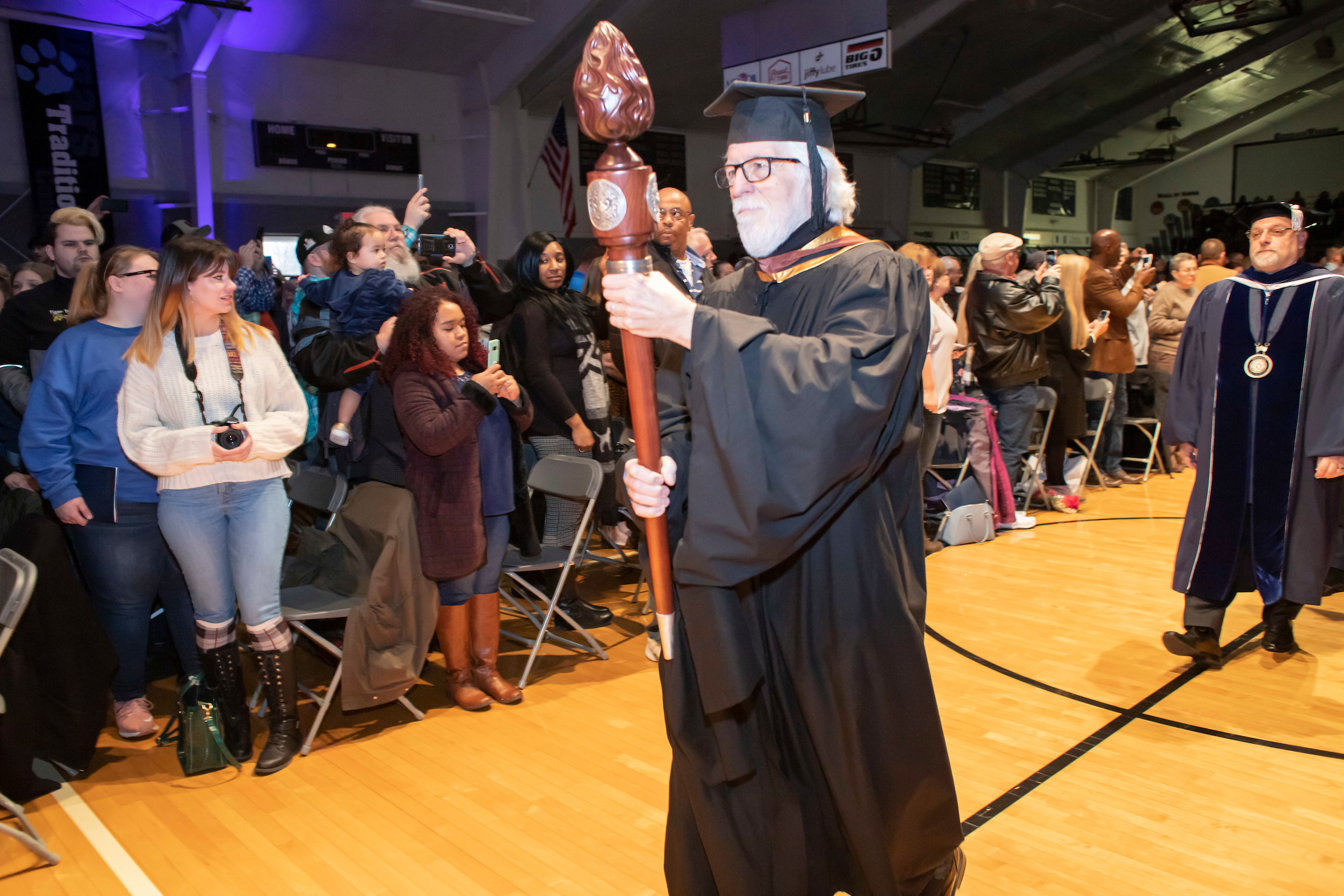 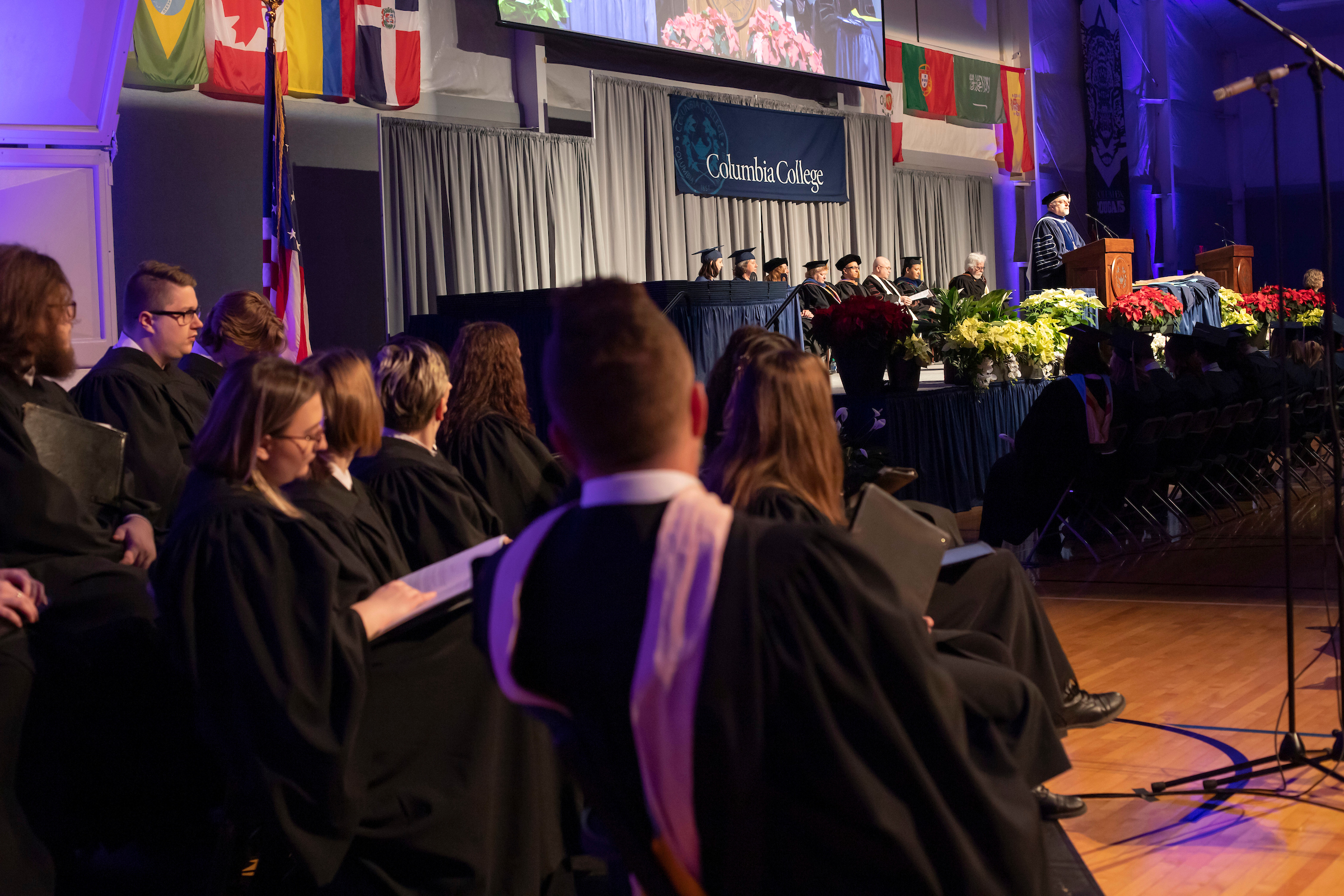 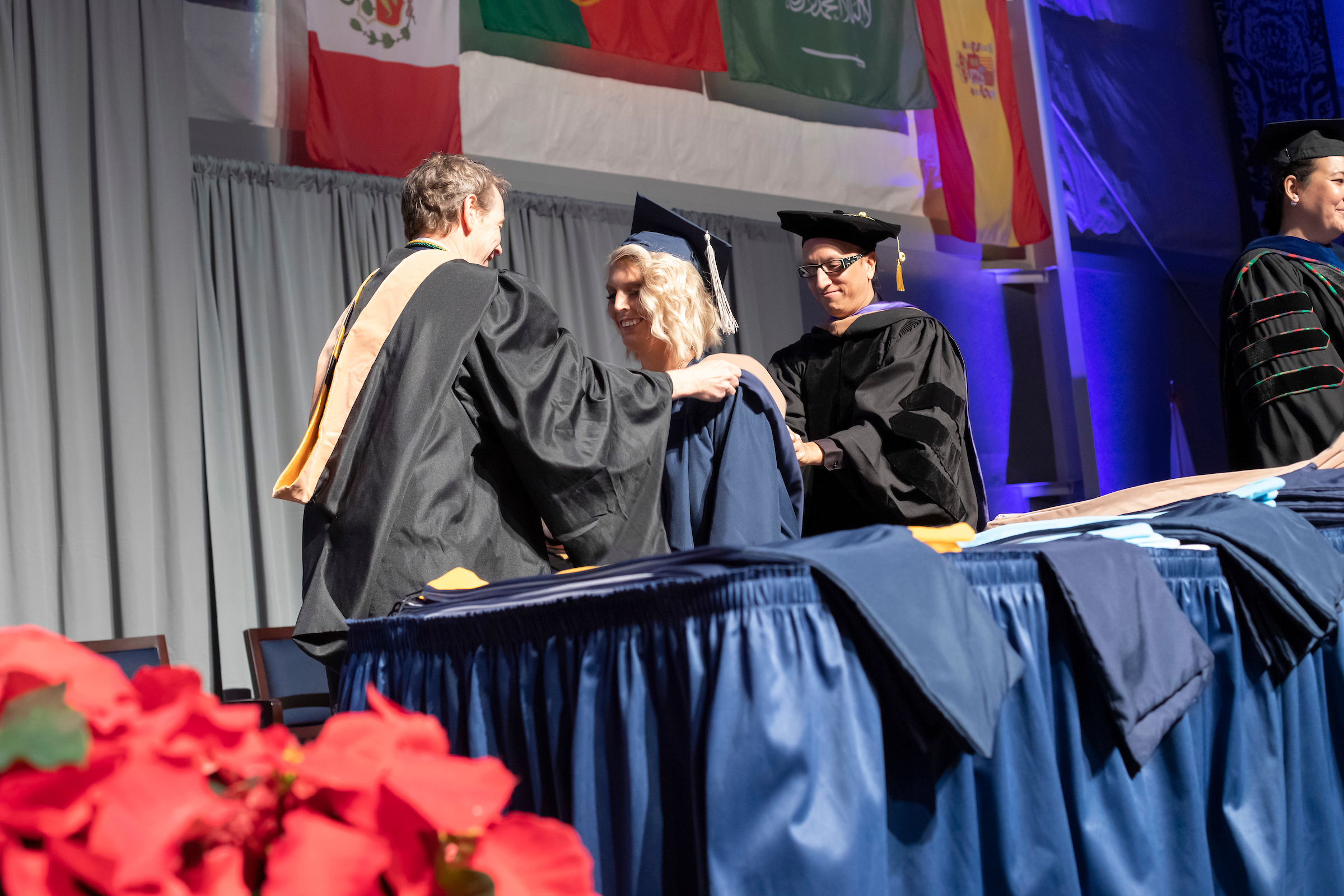 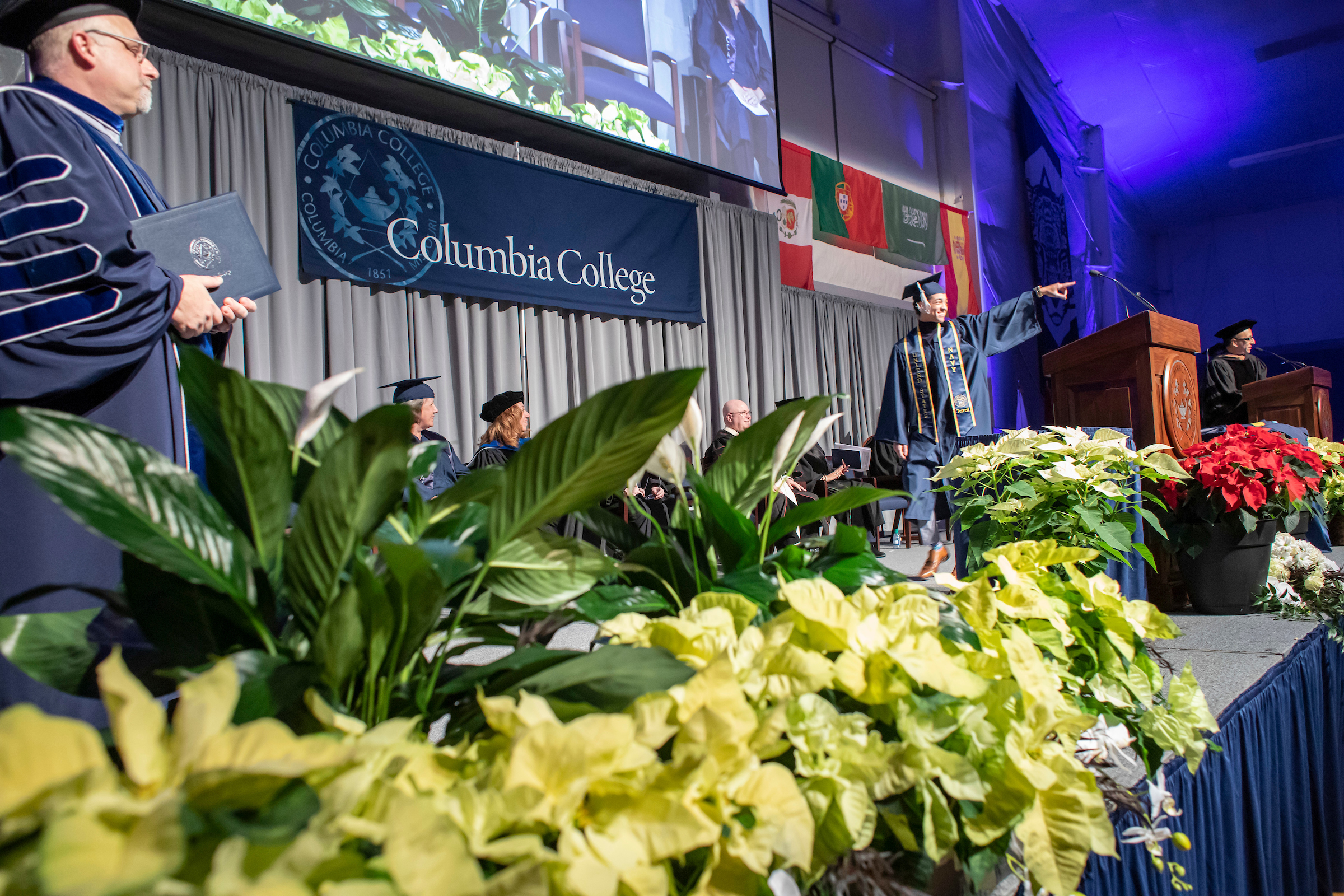 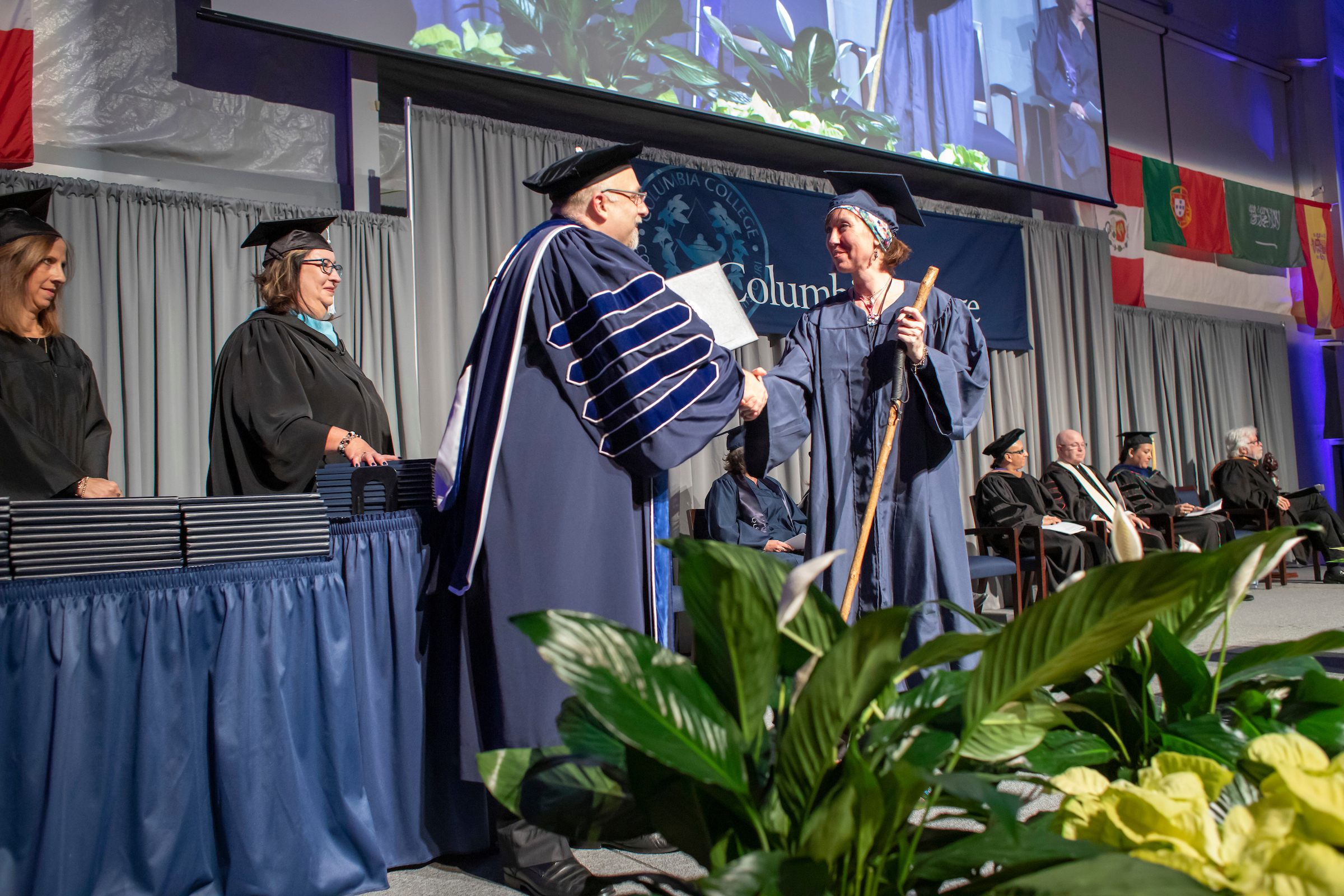 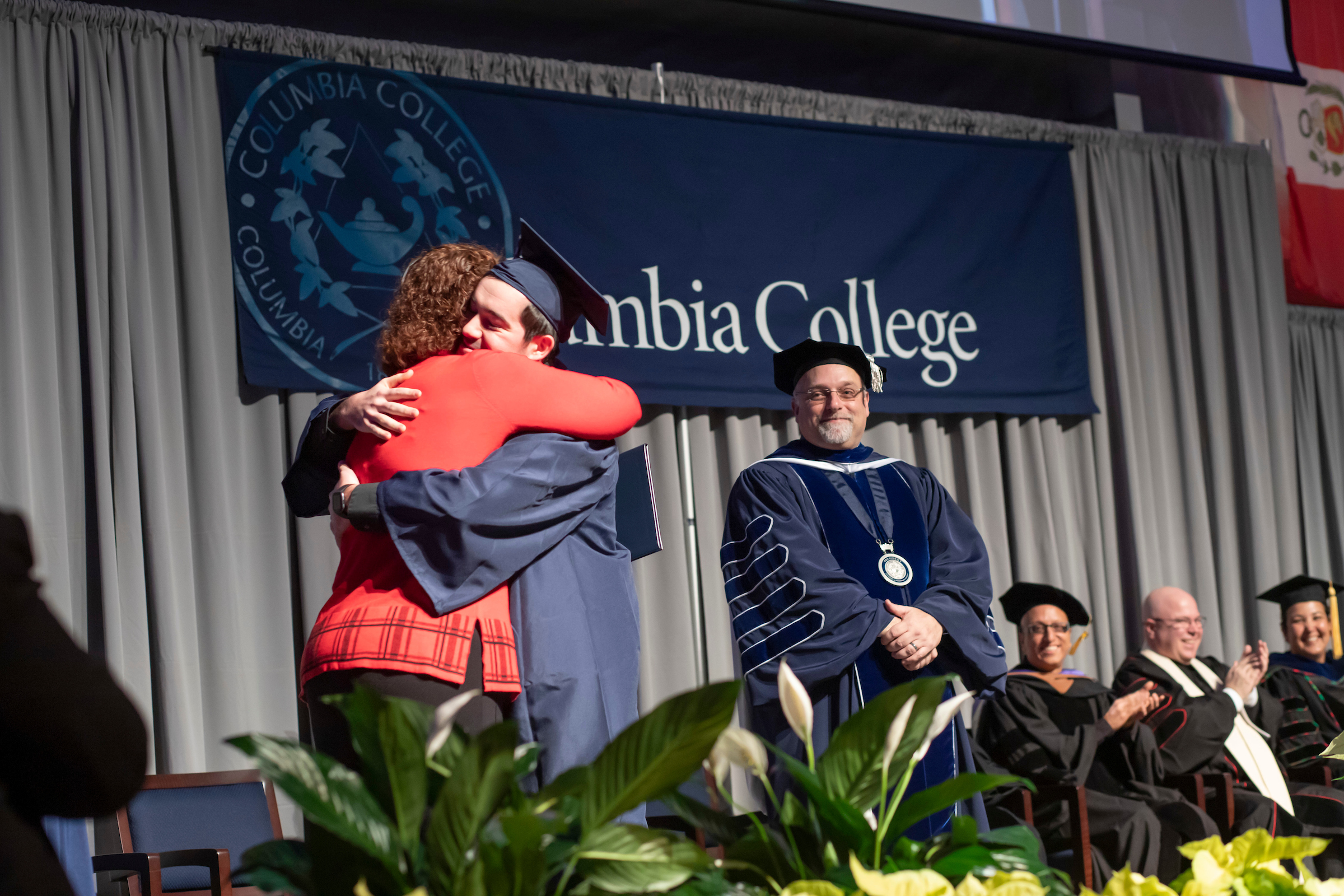 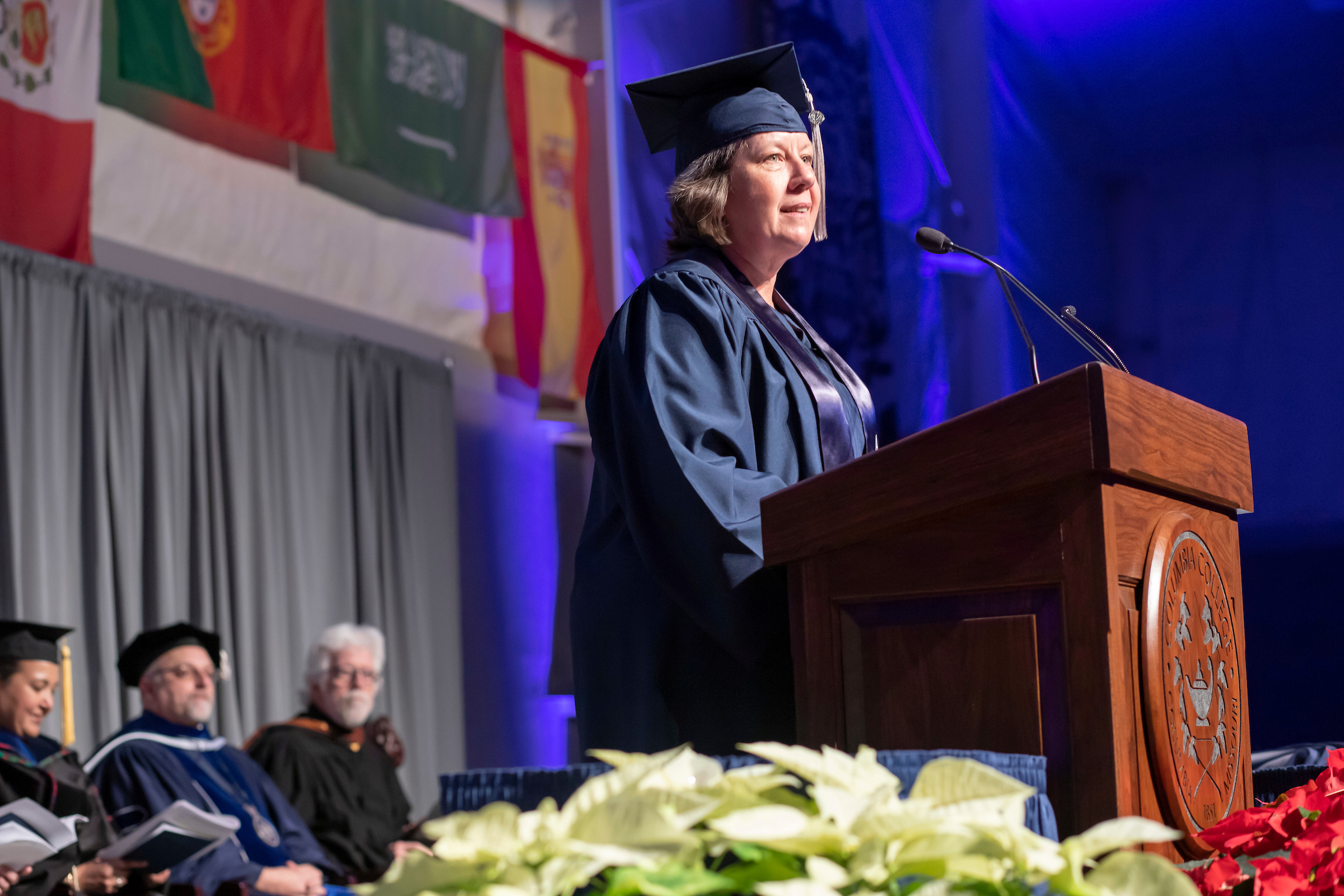 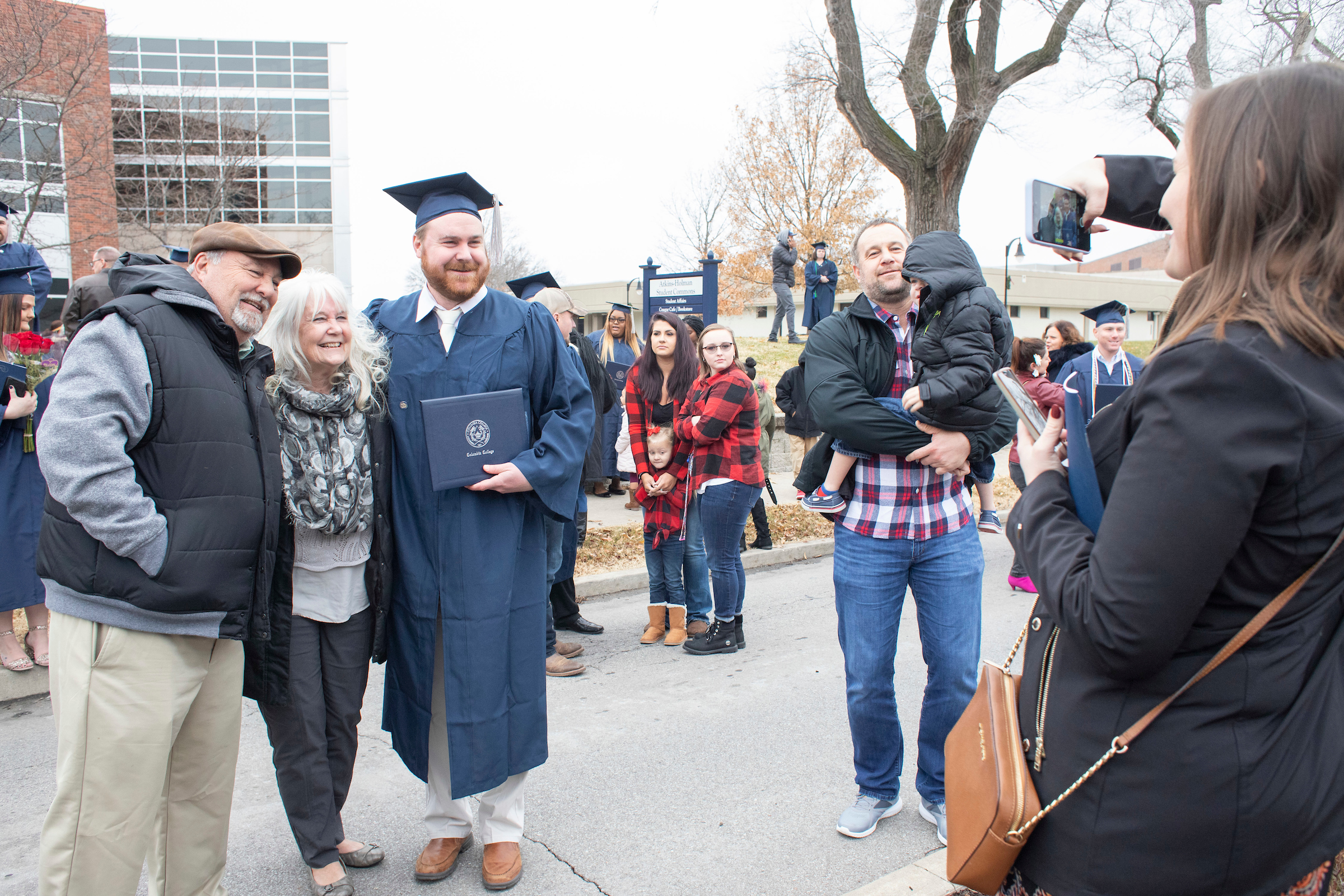 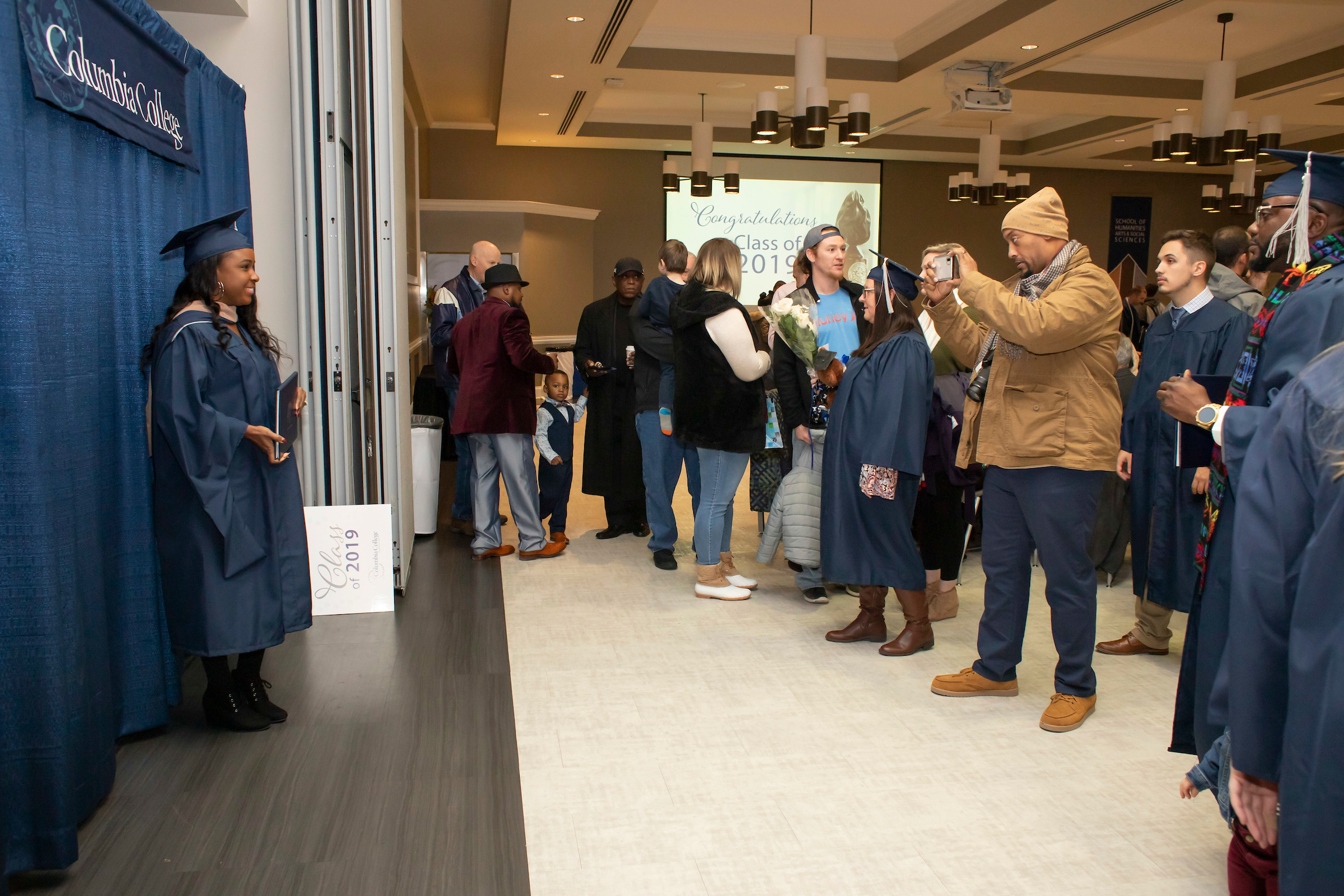