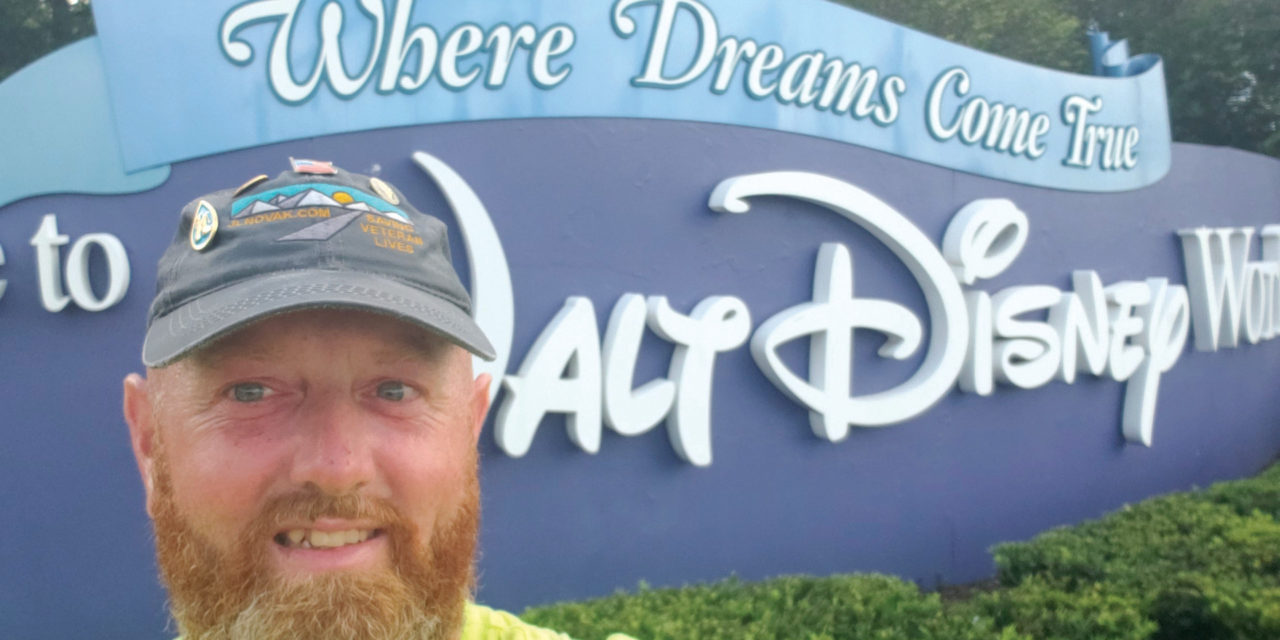 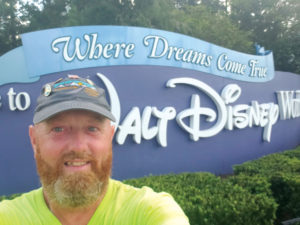 It took Jimmy Novak ’18 five months to walk across the United States from his
home in Washington State to Walt Disney World in Orlando, Florida.

On March 22, 2019, Jimmy Novak ’18 left his home in Washington State for a five-month hike across the United States. With a route plotted on Google Maps, he planned to walk an average of 22 miles a day for the next 22 weeks, with an August 22 arrival date in Central Florida.

Novak was inspired by a 2012 survey that reported 22 veterans died by suicide each day. Those numbers have improved in recent years, but the principle remains. “At the end of the day, it doesn’t matter if it is 21, 22 or 26,” Novak says. “If it is one person, we need to talk about it.”

Novak suffers from anxiety and depression. The words come easily to him now, but it has been a long road to acceptance. Novak served 21 years in the U.S. Army, where assignments took a toll on him but he was afraid of the perceived stigmas associated with asking for help.

“I had a good family, didn’t struggle with money, had long-term committed relationships,” he says. “I didn’t feel like I was justified having ‘problems’ and couldn’t reach for help without appearing weak to my peers.”

Today, he’s the first to commend the military for providing resources to service members. It wasn’t until 2018, with retirement on the horizon, that he sought help. He began therapy. He completed a bachelor’s degree in history through the Columbia College Online Program. And he researched a cross-country walk to bring awareness to emotional wellness.

With his wife’s help, Novak raised $9,000 to support the estimated $22,000 journey. He donated $1,200 to the American Foundation for Suicide Prevention and $2,300 to the Permission to Start Dreaming Foundation, a non-profit in the Pacific Northwest that provides educational tools and resources to the veteran community.

It was through the generosity and hospitality of the communities along the way that Novak kept going. Local VFWs and American Legions connected him to chapters down the road. He used hospitality apps to connect with strangers who would give him a place to sleep.

“I had the idea that this would be possible,” he says. “I found there is actually a large community of people who do this.”

When safety concerns due to winter storms in Wyoming and a tropical storm in the South threatened to hold him back, volunteers transported Novak to clearer paths. He re-routed to add miles back to his journey, eventually walking an astounding 2,815 miles.

“Most people who helped didn’t even have connections to veterans,” Novak says. “But everybody I talked to had been affected by suicide. We all see the value in awareness.”