What a week! Alumnus Brig. Gen. Charles McGee honored at State of the Union address 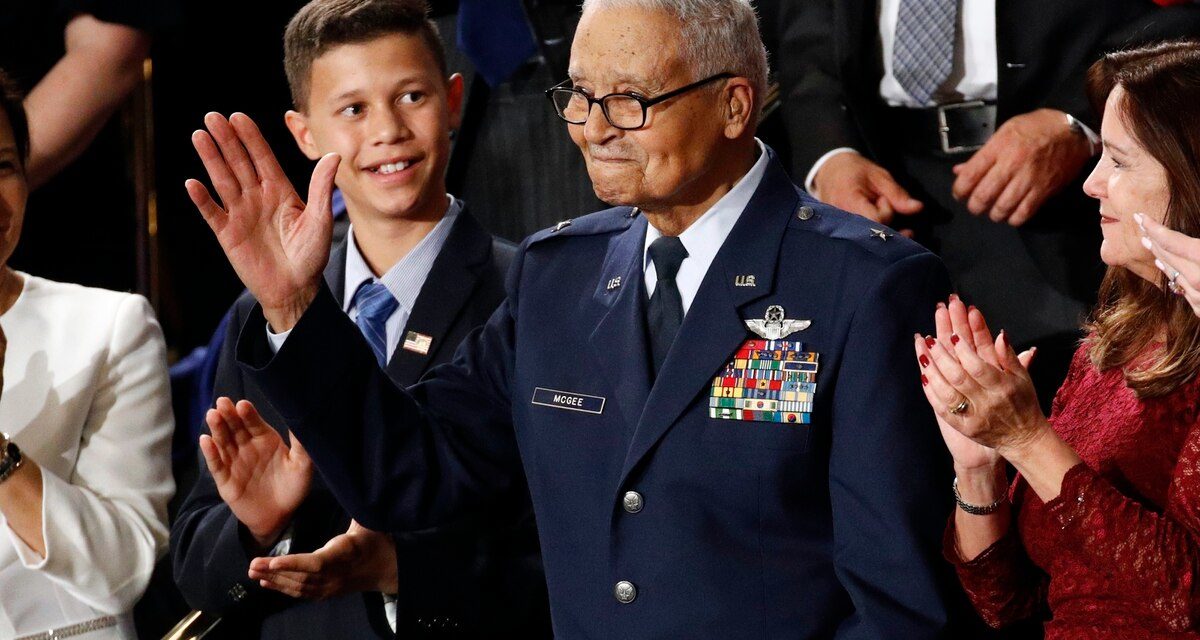 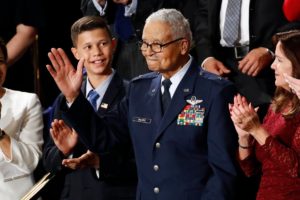 Tuskegee Airman Charles McGee, 100, and his great grandson Iain Lanphier react as President Donald Trump recognizes McGee at the State of the Union address to a joint session of Congress on Capitol Hill in Washington, Tuesday, Feb. 4, 2020. (Patrick Semansky/AP)

*Editor’s note: If you would like to show your support for Columbia College’s very own hero, you can make your gift now to support the Brig. Gen. Charles E. McGee House, the new home of the Ousley Family Veterans Service Center.

It has been a truly amazing week for Columbia College alumnus Brig. Gen. Charles McGee ’78, who graduated from the college’s Kansas City location. On Sunday, McGee was part of the ceremonial coin toss prior to the Super Bowl in Miami, Florida, alongside three fellow 100-year old World War II veterans. McGee witnessed a Kansas City Chiefs win over the San Francisco 49ers.

The excitement didn’t stop there. Tuesday, McGee was honored by President Donald Trump in the Oval Office where he received his Brigadier General Star, and then later that evening was recognized at the State of the Union address. McGee was joined by family at the event, including his great-grandson, Ian Lanphier, who hopes to be an astronaut when he grows up.

The recognition produced a non-partisan standing ovation from the entire crowd.

Late last fall, Columbia College announced that the Ousley Family Veterans Service Center will have a new home in 2020. The new space will enhance the student experience for its military and veteran community. The new facility will be named the Brig. Gen. Charles E. McGee ’78 House and serve as the home of the Ousley Family Veterans Service Center.

McGee was presented an honorary Doctor of Humane Letters degree from the college in 2014. He is a member of the famed Tuskegee Airmen, the first African-Americans to fly in combat. He is also a recipient of the U.S. Congressional Gold Medal and a member of the National Aviation Hall of Fame. McGee held the Air Force’s fighter combat record for many years with 409 missions and 1,151 combat hours, serving in World War II, the Korean War and Vietnam War. A scholarship was created to honor him in 2009 and is presented every year to a student veteran or their dependents. He celebrated his 100th birthday on December 7.

Several named spaces in the house are available and can be secured by calling (573) 875-7563. A dedication ceremony for the McGee House will occur on May 21 as part of Columbia College’s Military Appreciation Day.

All gifts will be listed in a welcome book that will reside in the house, and any gift of $500 or more will be recognized on a donor plaque in the home. General McGee and the Ousley Family will receive a full listing of all who support this project, unless otherwise requested.