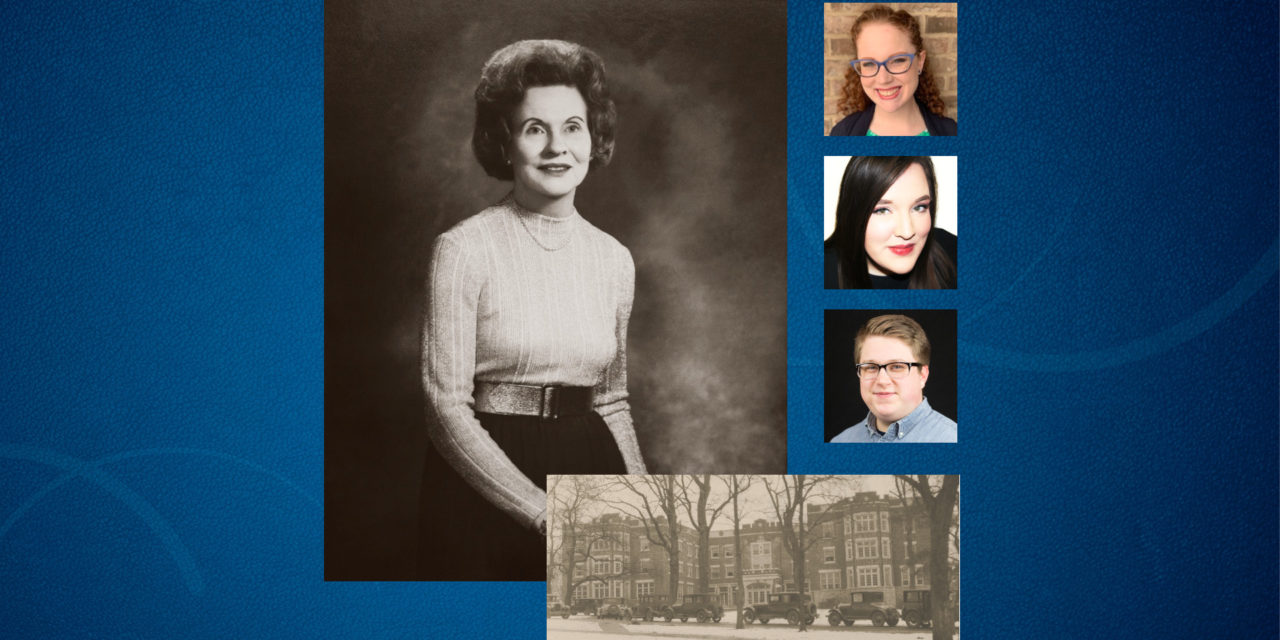 It would be an understatement to say the roots of John Dillingham’s family run deep throughout the history of Columbia College. His great aunt, Roxy Woods, graduated from Christian College in 1902, and both his mother, Frances ’29, and aunt, Louise Thompson ’33, also attended, in addition to several other cousins, nieces and family friends.

As a young man, he heard the story of when his grandmother passed away in 1933, and Aunt Louise was driven home to Kansas City by Christian College President Edgar Lee in order to be able to attend her and Frances’ mother’s funeral.

At the turn of the century, the Thompson and Dillingham families were cattle royalty: Frances’ father was one of the founders of the American Royal, and later her husband, Jay, was president of the Kansas City stockyards for nearly 30 years. Mr. Dillingham recalls learning to play the piano around the age of four or five on the family farm. “She said if she could hear me playing, that meant she knew where I was and I wouldn’t be in trouble,” he recalls with a laugh. “Aunt Roxy was an unbelievable Dixieland pianist – I wish I had some of her recordings – so being associated with music is not some strange world to me,” he added.

John – and Frances – grew up in a much different era than today. When new barns in the area were built the community would celebrate with a barn dance. “Everyone played what they could carry,” he said. As a young girl, Frances learned to play violin as well as piano. “Before there were cars and TV, that’s how you entertained yourself,” John says.

Throughout her life, Frances maintained a close connection with her alma mater. She was president of the Christian College National Alumni Board as well as chairman of the college alumni fund, and served as a trustee in the 1970s. In addition, she established three music scholarships: one in honor of her friend and former music teacher, Camilla Singleton; another to honor her sister Louise and her aunt Roxy, who took on the role of acting mother when the girls’ own mother passed away; and another to honor her mother-in-law, Edna Chestnut Dillingham, who attended Christian College in 1905. Following Frances’ death in 2011, John agreed to combine the three scholarships to form the Frances Dillingham Music Fund Endowment. While the 2020 Showcase had to be cancelled due to the novel coronavirus pandemic, Columbia College is pleased to honor Kaitlyn Landers, Madi Mertz-England and Carter Moore as this year’s Showcase Award recipients.

Ann Merrifield, who has served as Dillingham Scholarship judge for each of the last four years, expressed her pleasure at hearing this year’s honorees perform. “I continue to be so proud of our music program and the talent we have,” said Merrifield, who is the college’s senior director of Alumni Relations. “It was especially fun this year to hear the seniors. I first heard them as freshmen, and their progress over the last four years is amazing!”

As the music program has grown, its needs have evolved. Columbia College didn’t have any sort of event to honor and celebrate the achievements of the program’s top students, and the family’s legacy of support now makes possible the Dillingham Family Music Showcase (sidebar).

“Mr. Dillingham’s philanthropy has been central to our growth as a music program,” said Assistant Professor of Music Nollie Moore.

The Dillingham family’s support hasn’t only been financial: She donated her piano and 1893 German-made violin to the college, and also restored an 80-year-old grand piano that was brand new when she attended Christian College. That piano now graces one of the college’s practice rooms.

When Missouri Hall was renovated and rededicated in 2007, a stately first-floor conference room – located where Frances met her husband, Jay, decades before – was dedicated in her honor.

“It’s obviously a special place, and I’m tickled to see everything the college has been doing recently,” Mr. Dillingham said. “It’s been great to have all these alumni, and other people, who think Columbia College is pretty special. It’s fun to watch it grow.”

To learn how you make an impact on students for generations to come by supporting or endowing a scholarship, visit my.ccis.edu/givenow or contact the Office of Development at (573) 875-7563.

Columbia (Christian) College has been significant to our family historically. Music and a general respect for the fine arts are important on many levels. The Dillingham family understands that musical study and higher education are cornerstones of society. Through the creation of the Frances Dillingham Family Music Fund endowment, we hope a heritage is established that will support, inspire and encourage generations of students to create a similar legacy.
John Dillingham