Hail to the scholars 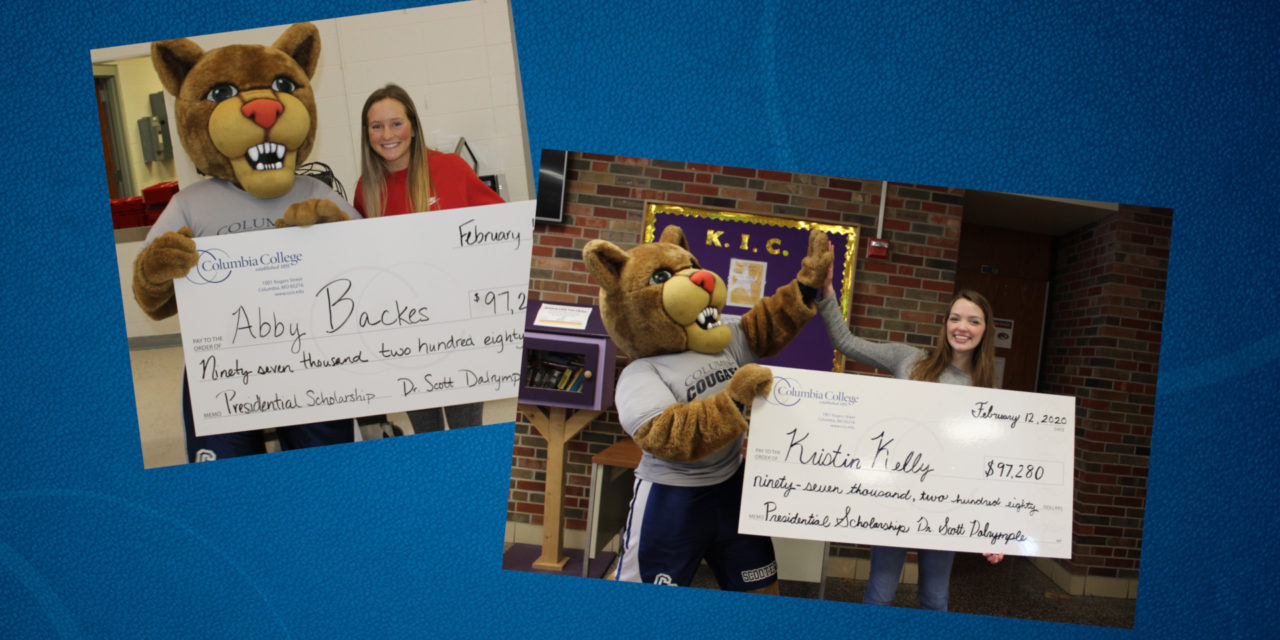 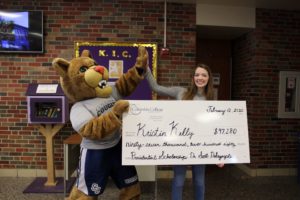 Kristin Kelly receives her check and a high-five from Scooter.

As one of six children, Kristin Kelly was told early on from her parents that college was only going to happen if she could pay for it.

On a cold, rainy morning in February, several staff members from Columbia College – along with Scooter – interrupted one of Kelly’s classes at Hickman High School in Columbia, Missouri, to let her know that it’s going to happen.

Kelly is one of 10 future Cougars who have been awarded a Presidential Scholarship, which covers the full cost of tuition for four years and is worth more than $97,000 apiece. The notice concludes a rigorous application process that requires hopeful recipients to supply a goal statement, recommendation letters and a resume.

Each January, qualified high school students participate in Scholarship Day at the college’s main campus (or, in the case of two international students this year, via Skype). The students are interviewed by a pair of faculty and staff judges, and also complete a timed essay.

“I’ve been filling out (scholarship) applications since August,” Kelly said, “so when I heard about the opportunity, I said, ‘OK, let’s go in for this.’”

Because of her familiarity with the college – Hickman is a 10-minute walk from Rogers Gate – Kelly said she’s interested in serving as a resident advisor and being involved in clubs and various communities on campus. “Just knowing the area around here, I know how I can help,” she said. 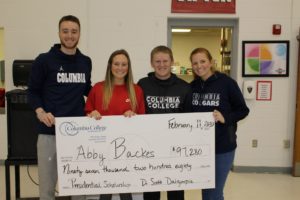 A day earlier, the crew headed 45 minutes southwest to Tipton, Missouri. The town’s most famous former citizen is David Koechner, the comedic actor best known for his role as Champ Kind in the Anchorman movies. But on this day in the Tipton High School cafeteria, all the cameras are focused on Abby Backes.

Her parents, Greg and Mary Jo, have raised their five children to be well-rounded, and Abby fits right in: In addition to being a four-year starter for the Cardinals – she was named the Missouri Basketball Coaches Association Class 2 Player of the Year last week after leading Tipton to the state title game – Backes carries a 4.0 GPA.

With four of the five siblings playing college sports, a basketball scholarship to Columbia College would be par for the course, but Abby set a goal to have the highest ACT score in the family, and after wowing the Scholarship Day judges, she’s a Presidential Scholar.

Backes has her sights set on working in a hospital setting; for now, she plans to major in biology and then enter a physician assistant program.

As the cafeteria emptied out, Backes was still in shock.

“I’m usually good at figuring stuff out, but I had no idea. I was super-surprised,” she said.

To learn more and register for an upcoming Scholarship Day event, visit our scholarships page. If you’re interested in making a donation to Columbia College to support student scholarships, please visit my.ccis.edu/givenow.