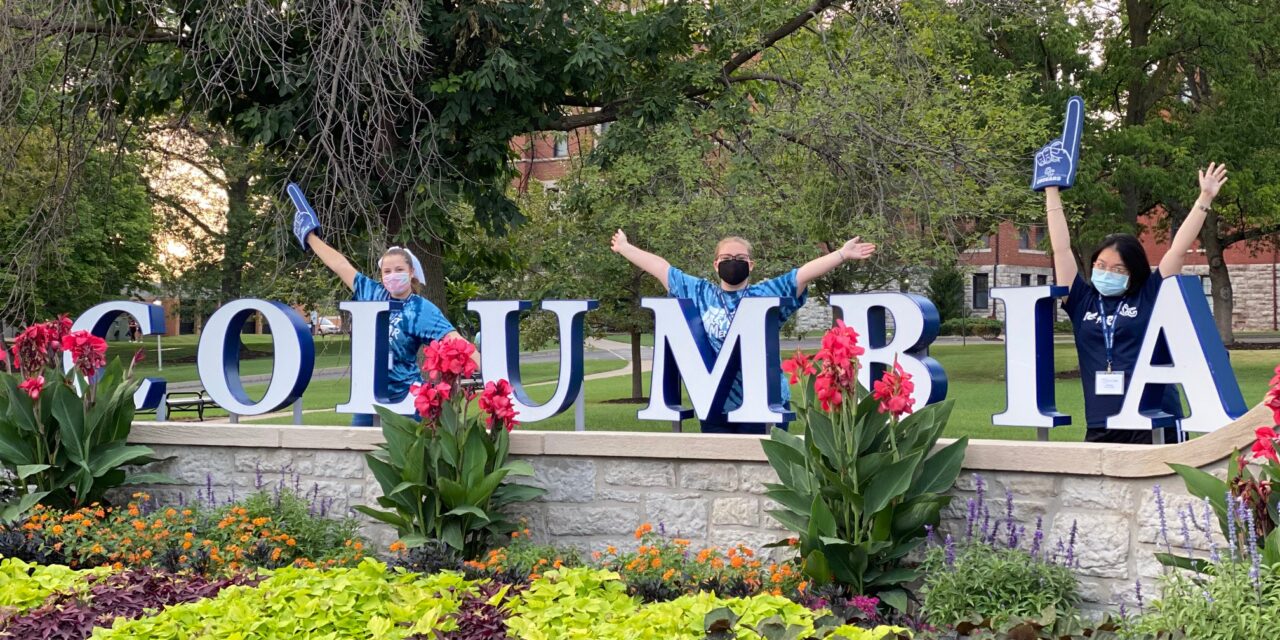 Nicole Emmons has fond memories being at Whitcraft-Schiffman Memorial Amphitheater the weekend before her freshman year at Columbia College began – even if she didn’t watch the movie that was playing on the large inflatable screen. “I know I talked the whole movie. I made my best friends that night,” says Emmons, a junior from Auxvasse, Missouri.

Emmons serves as a First-Year Mentor and advises incoming freshmen, and last Saturday evening, Emmons handed out bottles of water as “Goonies” played on the Quad. To be clear, this “Welcome Week” was much different than previous years due to COVID-19 precautions – every student and staff member wore a mask, and sat six feet apart from each other – yet Emmons was elated to be back on campus thanks to an ever-present feeling on these grounds.

The pandemic has forced the college to adjust several parts of its normal operating procedures. Residence hall move-in, which normally takes place over an entire week, was compressed down to the Friday and Saturday prior to classes beginning on August 31.

Before students could move in, they had to complete a form answering if they’d experienced any symptoms they might not have previously considered, then had their temperature checked from one of five automated kiosks. “We were able to screen everyone before they received their keys to move in,” said Associate Dean for Student Affairs Erin Mazzola.

Food service continues at Dulany Hall, though seating is reduced to three chairs per table and all food is served in to-go containers instead of the cafeteria’s previous buffet setup.

Other college traditions, such as “Storm the Gate,” were modified thanks to the pandemic. Instead of the traditional group of first-year students proceeding across 10th Street through Rogers Gate, small groups of students entered Atkins-Holman Student Commons and proceeded through Bass Commons to “Sprinkle the Gate” and pose for photos.

In perhaps the biggest change to college operations, students have the option of how to learn. As announced in early August, the college is now offering its “High-Flex” program – which provides the flexibility of both in-seat and virtual learning – to its Day Program students. For most classes, students will be able to select whether they attend in person or virtually. The educational experience will be synchronous, just as it was for in-seat students that moved to virtual classes this past spring.

What’s different about this approach is that it is, as the program’s name suggests, highly flexible: As an example, for a class that meets three times a week, a student could elect to be in-seat – attending in a safe, socially distanced environment – on a particular Monday, choose to attend virtually on Wednesday, then be back in person on Friday.

When asked about the opportunity to take advantage of High-Flex, Myles Jasper, a freshman baseball player from Kansas City, Kansas, gave an old-school response: “They did tell me I had the option to either do online or in-person depending on the day, but I think it’s better for me if I’m in class in person,” Jasper says. “I just need to get out the door and get into the actual classroom to force me to be on top of my studies.”

Another of the annual rites of the return to campus is the first floor meeting among your dorm-mates. This year, thanks to the need to socially distance, senior Resident Assistant Braydon Hampton addressed the 30 students on his Miller Hall floor virtually via Google Meet. “I think it’s actually a little easier to get people to show up to the virtual meetings,” Hampton says. “It’s kind of like an extra reminder, and they can go ahead and RSVP; if they say no, we can work through why and easily make those adjustments.” Hampton summed up the thoughts of many members of the college community: “I really think that we can pull this together. Columbia College has always been close-knit group, and if we just pull together and all just do our part, I think we can get through this year.”