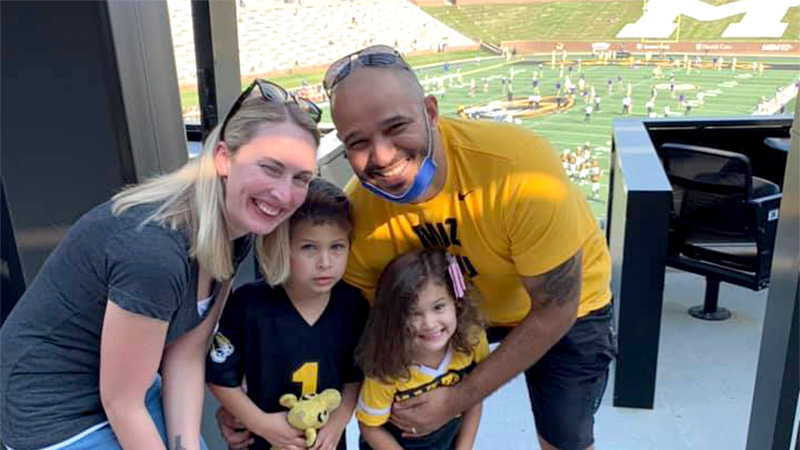 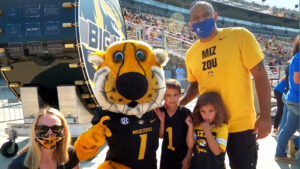 From left to right, Amber ’12, Logan, Skylar and Jeff Barringer ’12 & ’17 made memories to last a lifetime on Saturday!

The University of Missouri football team had an amazing day on Saturday with a 45-41 victory over defending National Champion Louisiana State University at Faurot Field. But the Tigers weren’t the only team to have a memorable day.

Team Barringer — which includes 2012 and 2017 Columbia College graduate Jeff Barringer, his wife Amber, who is a 2012 CC grad, and their two children, Logan and Skylar — were on the field as Jeff was honored as the Veterans United Home Loans “Hero of the Game.” The family was also invited to bang the gigantic drum “Big Mo” to get the crowed fired up, an honor few fans get to experience.

“It was truly amazing to be honored at the game. My family was thrilled to meet Truman the Tiger, bang on the drum and have our pictures on the big screen,” Jeff said. “I am humbled by this opportunity and can’t help but think of all the other veterans that have sacrificed for our country. I wish there were more programs like this that honored veterans for their service as this was a very powerful moment for me and my family.”

The honor is designed to recognize the sacrifices veterans and service members have made. Jeff served for five years in the US Navy while Amber served in the Navy for six years (the couple met in boot camp!) He and Amber were also members of the Columbia College staff for many years following graduation with Jeff working in the Admissions Office and Amber working in both Enrollment Management and Columbia College Global. Jeff now is a loan officer at Veterans United while Amber currently serves as an executive assistant at Equipment Share.

“The military helped by giving me the discipline, focus and perspective that I did not have before joining, I was exposed to a worldly view as an 18 year old that shaped who I am today,” Jeff said. “After doing two combat deployments to Iraq, Columbia College was instrumental in who I am today. CC helped me transition from high intensity military life to civilian life. At CC I learned to be introspective, discerning, and inquisitive to the world around me. There is no way that I would be who I am today without the military and Columbia College.”