From small town to big city, Pata ’63 has seen it all 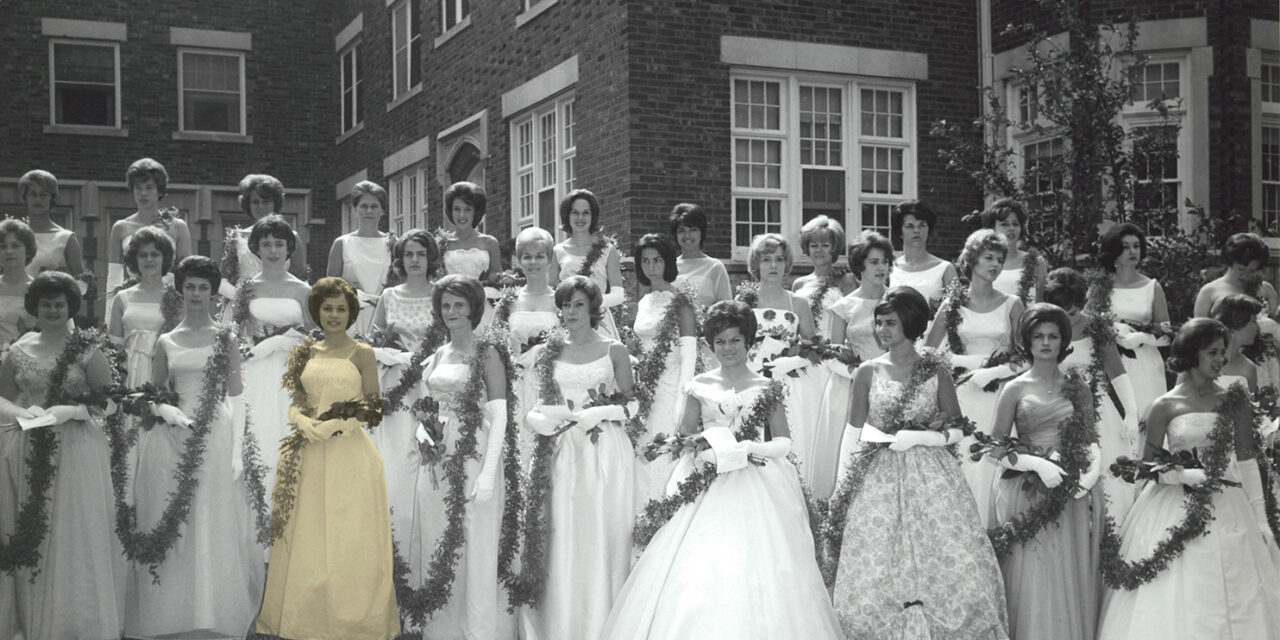 From an idyllic upbringing in the Ozarks, to the “big-city” life at Christian College, to the halls of Congress and the office of one of the richest men in America, Joan Puchta Pata ’63 has certainly seen it all. And were it not for a gentle push from back home, it all might never had happened.

Near the end of her first year of college, Joan was voted president of the Student Government Association, and knew the position was going to require a great deal of work, time and energy the following year. The responsibility weighed on her, to the point she told her father she was considering not returning to school.

“He said, ‘Joanie, God gives us all gifts, and I can clearly see that God has given you gifts, and this could be something that would really stretch you and grow you,’” Pata recalls. “‘I think you were elected for a reason, and I’d encourage you to go for it.’” She did, and that set the course for an amazing career.

As part of her SGA duties, Pata was responsible for representing the students by giving an address during the college’s Fall Convocation.

“That was a growing experience. I remember the dress I wore and standing at the podium. That was the beginning of a great year,” she says. “It was a wonderful opportunity. I felt blessed by God to have classmates and good friends that served with me. It was a good experience and I would encourage anyone to think carefully about the opportunities they’re offered, because you never know where those opportunities will take you.”

After earning her associate in arts degree in 1963, Pata earned her bachelor’s degree from the University of Arkansas, just two hours from her hometown of Rockaway Beach, Missouri. Her next opportunity led her to Washington, D.C., to work as a speechwriter for Missouri Senator Stuart Symington. While she was only there for a year, she had plenty of memories.

One of her duties would be to report back to Sen. Symington what was occurring on the Senate floor, so on occasion she would ride the Capitol’s internal subway system from the Senator’s office building to the Senate chambers. “One of the times that I got on the subway car, Robert Kennedy jumped in next to me, introduced himself, and said, ‘I’ve seen you around here.’ We began chatting, and he was delightful.”

Sen. Symington was invited to give a speech to the National Geographic Society; in preparation for crafting that speech, Pata expected to hail a taxi to the NGS offices. She was instead met by a limousine for her first experience of the grand style of Beltway life. The Senator had also reserved office space inside The Capitol building to allow Pata quiet space to focus on her writing. “I remember looking out the window out onto Washington and thinking, ‘What’s a girl from rural Missouri doing here?!’”

Pata decided to return to Arkansas to work on and complete a master’s degree from the University of Arkansas, where she began a teaching career in her specialty of communication that included a stint at what is now the University of Nebraska-Kearney. In the fall of 1971, Pata was the first editor for Walmart World, a monthly in-house magazine for Walmart’s thousands of employees across what was then around 50 stores (as of this year, Walmart and its subsidiaries now employ approximately 2.2 million people across more than 11,000 stores).

Among each issue’s features was a “Mystery Guest,” and Joan recalls founder Sam Walton – who graduated from the University of Missouri and went to high school just down the street from Columbia College – visiting her office frequently, including often asking who the Mystery Guest would be each month. “He’d try and ask, but I wouldn’t relent,” she says.

“Sam was delightful to be around. He’d drive up in his little red truck, and I’d remember instances where he’d visit a store, go up to a clerk, say for instance Mary, and he’d say, ‘Mary, how are you doing?’ And she’d say,

‘Sam, I’m doing fine.’ He’d say, ‘Didn’t your husband have surgery last year? How’s he doing?’ ‘Well he’s doing fine, Sam, thanks for asking.’ And that’s who he was. That was something that never left him,” Pata adds. “I’ve often wondered how big his eyes would be if he saw Walmart now.”

Pata now lives with her husband, Bob, in Nixa, Missouri – not far from where she grew up in Rockaway Beach. Her son, Matthew, earned his law degree and worked for several years for federal judges in Georgia and Michigan before becoming a self-taught programmer while at General Motors. He continues to live in Michigan and now works as a developer for Automattic.

Scheduling conflicts prevented Pata from meeting up with her classmates two years ago for their 55th Christian College reunion, but she’s grateful for her time in Columbia.

“I wouldn’t trade that for anything. There was an authenticity at the college,” Pata says. “It mattered whether I succeeded or not. I was not a number by any means, nor was anyone else a number.”