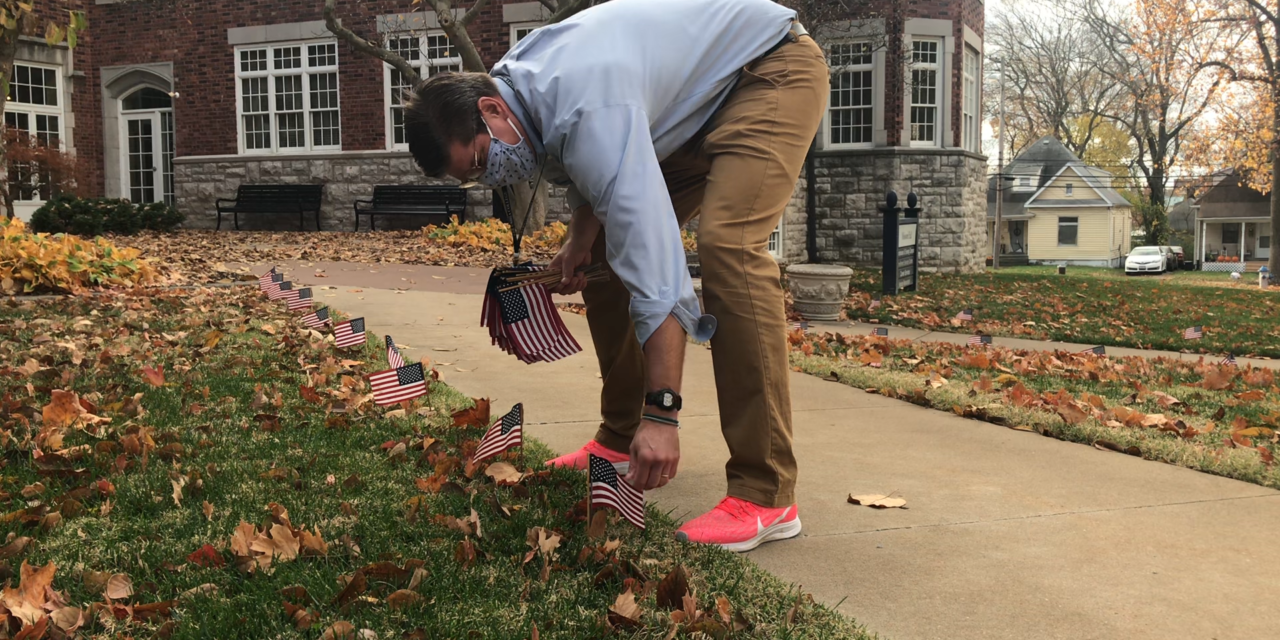 Although COVID-19 has prevented normal celebration of the college’s traditions, they nevertheless carry on. Last week, during the 11th hour of the 11th day of the 11th month, the college presented a virtual Veterans Day celebration via its livestream platform. [It is also embedded in full below.]

Rob Boone, associate vice president for the college’s locations on military installations, served as master of ceremonies. “Columbia College is proud of our enduring relationship with veterans and service members dating back to 1973,” said Boone, who retired as a lieutenant colonel following a 26-year career with the Army.

Dr. David Russell, chair of the Columbia College Board of Trustees and a retired Army lieutenant colonel, provided the celebration’s keynote address. “We are linked by common purpose, common experiences and uncommon sacrifice.” he said. “Such bonds are not easily broken, nor will they ever be.”

Russell stressed that the values and leadership skills servicemembers gain over their careers continue to serve them and our country well after their reentry into civilian life. “Veterans know how to exercise self-discipline, pay attention to detail and work in teams. We are the product of an effective meritocracy that is blind to race or ethnicity, and rewards skill, experience and hard work.”

Senior Director of Military and Veterans Services Keith Glindemann, himself a 24-year Army veteran, presided over the awarding of 11 scholarships:

The final award of the day, the Andrew W. Helmreich ’18 “Spirit of the Warrior” Award, is named in honor of an Army veteran and Columbia College student leader who tragically passed away just weeks before completing his bachelor’s degree. The 2020 award is presented to Alan Ramirez, a Day Program student who served as a military police officer in the Army and an active member of the Columbia College Student Veterans Association.

To conclude the ceremony, Senior Systems Analyst Jen Boyt, an Iraq veteran of the Army National Guard, read the names of the 29 American soldiers, sailors, Marines and airmen who have lost their lives since last Veterans Day.

Wednesday evening, for the eighth consecutive year, a series of red, white and blue lights illuminate the Military Veterans Tree outside of Dorsey Hall. A number of faculty and staff – several of whom are veterans themselves – joined Glindemann on Bass Commons for a socially distanced lighting of the tree.

“It’s important that we continue the college’s tradition of honoring our veterans,” said Glindemann. “Even though we can’t welcome visitors on campus, everyone driving by can see the flags, ribbons and the lights on the tree that we’re thinking of them.”

Lamps in front of St. Clair Hall also were lit green, the color of hope, renewal and well-being. “Greenlight” is also a term commonly used to activate forward movement. The simple gesture of changing one light to green creates a beacon of support and appreciation, and a visible symbol of our commitment to “greenlight” veterans forward as valued members of our communities.

This week’s events are just part of a series of military-connected events this fall. On Monday, December 7, the college will host a virtual event to officially dedicate the Brig. Gen. Charles E. McGee House – the new home of the Ousley Family Veterans Service Center. Located on North Eighth Street, the building is named for McGee, a 1978 graduate of the college’s Kansas City location.