Latest Grossnickle donation continues a legacy of service to CC 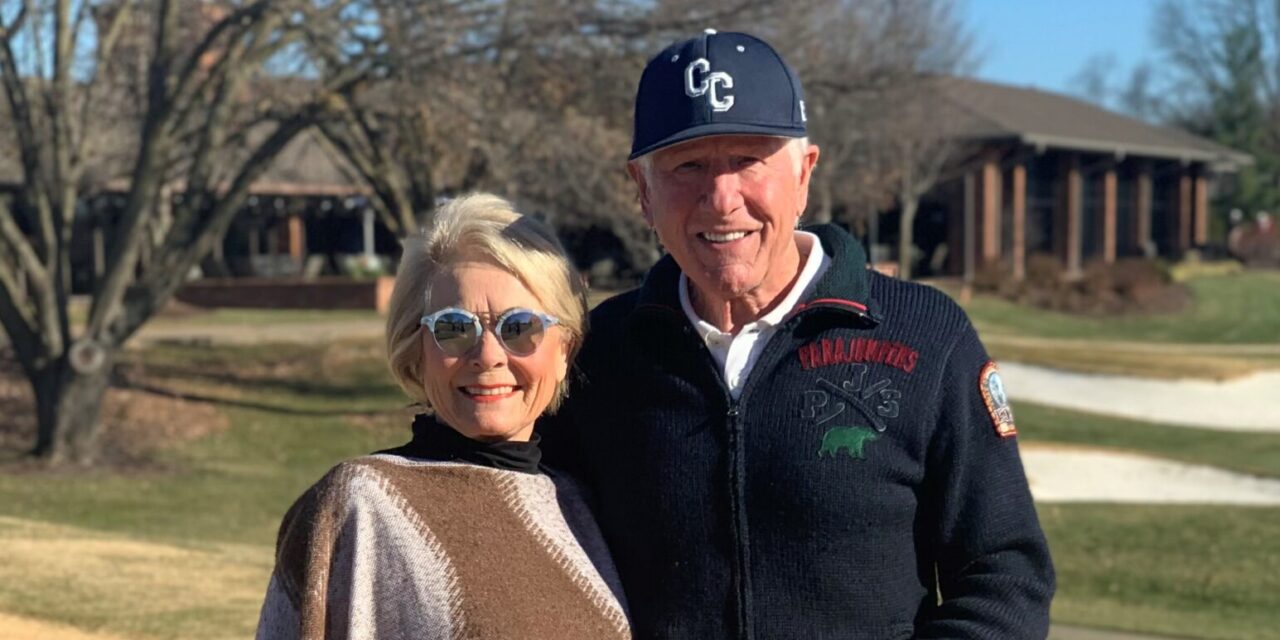 From its four national titles, to its dozens of national-title appearances across a variety of sports, Columbia College has seen more than its share of iconic athletic seasons over the last several decades, and Daisy and Skip Grossnickle have been there for all of them.

“For a long time, there were only five sports, but they were all outstanding,” said Daisy, a 1966 Christian College graduate and member of the Board of Trustees who is stepping down at the end of this year. “We have attended every sport we possibly can, and have enjoyed watching outstanding athletes and coaches.”

That enjoyment has fostered other support, including a recent donation of athletic weight equipment. James Arnold, the college’s director of Athletics, says the significant gift expands the Cougars’ strength and conditioning options within the Koepke Fitness Center, and provides upgrades in many areas. “Their gift of high-quality, first-class equipment will benefit our athletic department and our entire college community for years to come.”

Arnold has seen the impact of the Grossnickles’ continuous generosity to the college. “From my first day on campus, Skip and Daisy have been so welcoming and supportive,” said Arnold, who has been at CC since May 2019 and also serves as interim vice president of Enrollment Management & Marketing. “I have appreciated their support but even more their friendship.” For their longstanding support of Cougar Athletics, the Grossnickles were recognized in 2017 with the department’s Koepke Family Service Award.

Growing up in Chanute, Kansas, Daisy always knew she wanted to attend an all-women’s college; fortunately for Daisy and what was then known as Christian College, that was her school of choice. She and Skip, who grew up in Kirksville and was a star member of the University of Missouri football team, began dating her freshman year.

The summer after her graduation from Christian – the two were married in July of 1966 – she told Skip that she wanted to give back to her alma mater, and she’s done so every year since, making her one of very few people who can claim such support. “When I say give, it was probably a $25 check, I don’t even remember the amount. but I committed at that point to give every year back to something that I felt was so wonderful,” says Daisy, who began her service to the Board of Trustees in 1982, and was elected the first woman to chair the Board in 2005. By the time she stepped down as Chair 11 years later, she had supported four of the college’s 17 presidents – three of whom she helped select.

Their financial support hasn’t been limited to Athletics; in recognition of a generous contribution to the college’s 2008 renovation of Missouri Hall, the college’s office that assists students with future job prospects is now called the Grossnickle Career Services Center.

In addition to her service to the Board, Daisy has supported the college in numerous other ways, including as a member of the Columbia College Alumni Association (CCAA) Board and the steering committee to raise funds for the Brouder Science Center. She and Skip are also members of the Columbia College Fund, Cornerstone Club, and the President’s Society Dorsey Chapel Circle.

In 1991, she was honored with the Columbia College service award by the CCAA for her significant contributions and service to the college. In honor of Daisy’s years of service, her family created, and many friends continue to support, the Daisy Willis Grossnickle ’66 Scholarship to provide assistance to students at Columbia College. In a fitting tribute to the countless hours Daisy has spent making the college a better place, a bust of her likeness was commissioned and placed in the St. Clair first-floor parlor in 2016.

Daisy continues to manage real estate trusts and properties, and Columbia College isn’t the only institution graced with her service. She was instrumental in developing the Memorial Prayer Garden at Missouri United Methodist Church, where she has been a continuous member since arriving in Columbia in 1964. Daisy is also one of the founders of “Mothers of Pre Schoolers,” a program designed to nurture mothers of children in Columbia from birth to age six.

“People can support in more ways than giving money, but you don’t have to worry that your money isn’t being spent well when you donate to an entity like Columbia College.”

“The effect that Columbia College has on the community is a reason to support them,” says Skip, who continues to serve as a partner and senior advisor of TIG Advisors, an independent insurance agency. “I’ve been in business for 50 years, and we’ve hired a number of Columbia College graduates over the years, including several with us right now. They’ve all been very well-trained in their profession, they’re good workers, and they’re loyal. That’s another reason to give.”

While she is stepping down from board service after 38 years, Daisy’s commitment to CC will never end. “The bottom line,” she says, “is that I’m so very grateful to have had the opportunity to come to Columbia College.”