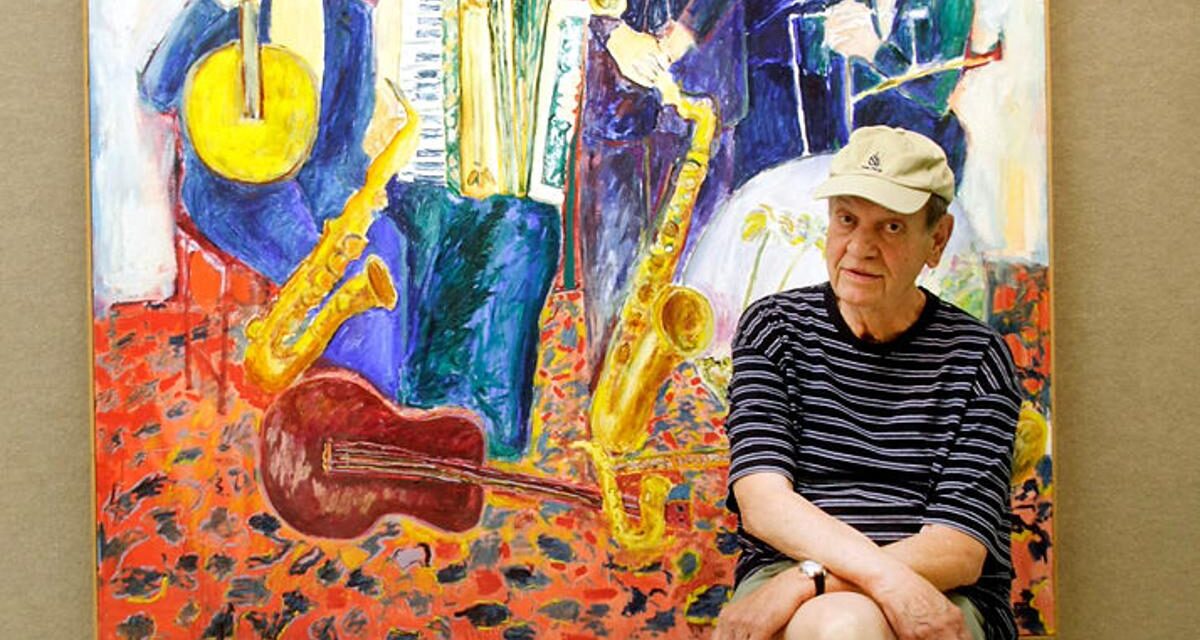 As noted in this recent Columbia Missourian article, Cameron “spent 48 years teaching students in Columbia across three different colleges. His own works still hang on the walls around the community and tell a greater story of his life.”

Current faculty member Mike Sleadd, professor in the Department of Visual Arts and Music and a colleague of Cameron’s for many years, was kind enough to share some of his memories and those of others in the tribute below:

In 1988, Ben Cameron told me there was an opening for a graphic design professor at Columbia College. I was very fortunate to join Tom Watson, Ed Collings, Sid Larson, Richard Baumann, and Ben — a great group of artists, professors, colleagues and friends. We all got along well despite varied teaching styles, personalities and politics. Richard and I are still in the program after over 30 years. Ed and Tom are retired, and Sid and Ben have passed away.

I hate the term “lost” when talking about someone who died. Ben has never been lost. Well… that may not be totally accurate. I imagine that his wife Brooke kept him heading in the right direction when they traveled the world.

Barbara and I have a beautiful etching by Ben on our dining room wall. As with most of Ben’s prints, this intaglio of the early Moulin Rouge is alive with color, expression and joy. I don’t know which was more colorful, his art or him? I enjoyed his wit and his wisdom a great deal. He had a way of blending the two that made every conversation a blast!

Naomi Lear, who was fortunate to teach with Ben for a number of years as well, holds him tight in her heart. She was always certain to sit between Ben and me at Fall Conference and other college functions so that we wouldn’t cut up too much. He was brilliant in so many ways, but very much in touch with what makes a full life. When I put news of Ben’s death on Facebook many former art students had only praise for their former professor. Here are just a few comments:

“Ben was an amazing professor who helped me on my path as an artist and teacher. I’m so sorry to hear that he has passed.”

“I often hear myself say something to a student that may have been something I learned from Ben. I’m grateful to have been one of his students.”

“Went to NYC a few times with the Camerons and it was great to visit museums and galleries with both of them. They both had and have a lot to say and it‘s always worth a listen.

I quote Ben to my students as I walk around my drawing classes all the time. He was an inspiration and a pivotal professor and person in my life.”

“Ben was an incredible teacher. I also learned to choose which comments to use and which to let pass. I’d tell people I had a “Ben filter” at the top of my head. The useful criticism could come through but the funny “BS” remained where it was. He went from teasing my early efforts to insisting I go to grad school so I could give back. One of my favorite memories is when I was preparing for the opening reception of my BFA show. It was the day before and I told him I had a very important question. Without missing a beat, he replied “wear it up.” I was shocked — how did he know?! Love you always, Ben.”

“I absolutely adored Ben. He was a huge influence on me as a young person and artist. I still remember bits of advice he gave me and “that look.” LOL. I was just thinking it had been far too long since I visited him. As with any great teacher, his legacy far precedes him. Grateful for the ripples he ignited in the world.”

I was lucky to have Brooke as a graduate school professor in printmaking and drawing. She and Ben had such a glorious bond. They were a constant in the cultural life of this city. We knew that it was an event worth attending if we saw them in the audience.

Those wishing to make a gift that will support students in the Columbia College Visual Arts Department in Mr. Cameron’s honor may do so by clicking here.