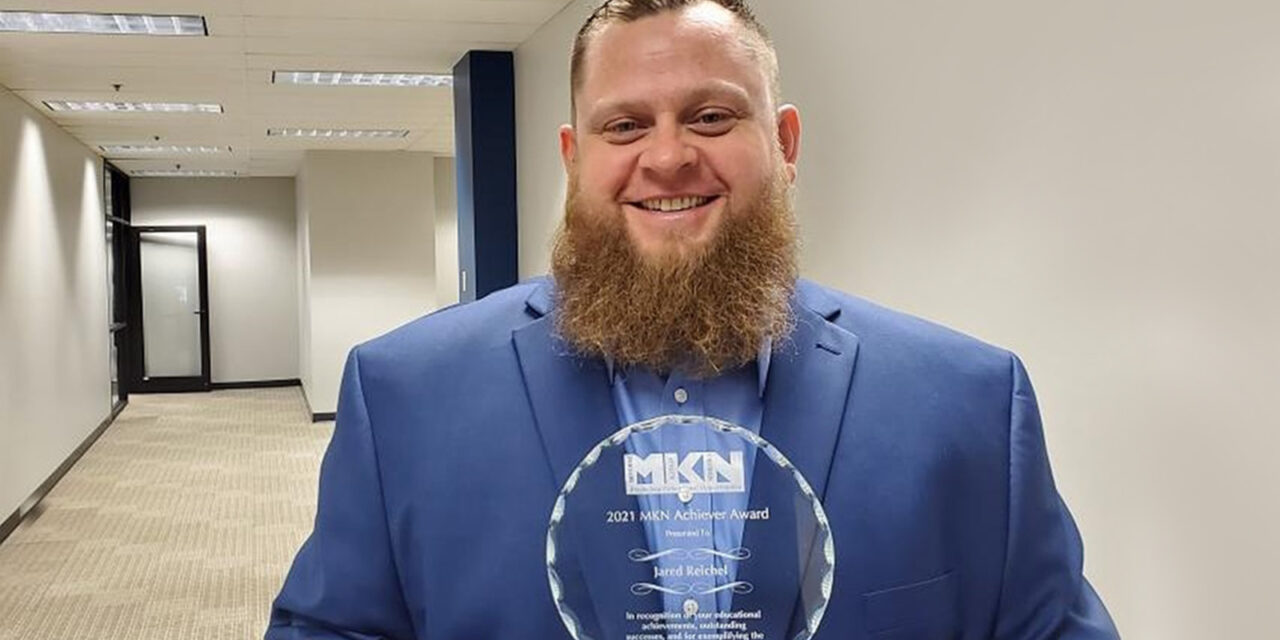 Each year, the MO-KAN-NE three-state chapter of the Educational Opportunity Association (EOA) gathers and announces recipients of the TRiO Achiever Award. The three honorees are recognized by their peers for their exemplary civic, community and professional contributions. Columbia College’s TRiO Student Support Services (SSS) program is designed to encourage first-generation and low-income students and students with disabilities to persevere and complete their college degree.

Beginning with his exceptional tenure as a student at Columbia College, and now serving as a Senior Client Relations Manager at Veterans United Home Loans, Jared Reichel ’16 has made an impact in the mid-Missouri community for over a decade. Behind his impressive track record and faculty nomination from Kim Kinyon Coke, advisor for Columbia College TRiO SSS, Reichel was named one of three Achiever Award recipients on April 8 during the organization’s awards ceremony.

Reichel’s incredible personal journey has seen countless events of adversity, growth and gratitude. In pursuit of bettering his life as a young adult, he joined the U.S. Army in 2005. While he was committed to serving his country, Reichel also maintained focus on continuing his educational goals. Shortly before receiving orders for a 15-month combat deployment in Iraq, he recorded an exceptional SAT score and was accepted into another local university.

Starting on Christmas Day of 2007, Reichel and his team conducted 350-plus missions over an 11-month period. In November 2008 on a mission to Sadr City, his team’s truck was struck by an improvised explosive device (IED), or a roadside bomb. The explosion resulted in two of Reichel’s fellow soldiers losing their lives while experiencing a slew of injuries of his own. Three months later, due to his injuries and suffering from severe post-traumatic stress disorder, Reichel began the retirement process from the Army.

After returning to mid-Missouri in 2010, Reichel began seeking the next step in his personal journey and continued his ambitions of achieving academic success. With his previous acceptance into the other institution in-hand, he met with an academic advisor and unfortunately walked away with disappointment.

“I remember visiting with them and they had forgotten my name, degree path and purpose for going to college and it was so frustrating,” Reichel recalled. “I remember leaving campus and immediately jumping on the phone with my Mom and explaining the experience I had just occurred. That’s when she said I should go back to Columbia College and ask for a tour and see what they had to offer.”

Reichel then made the quick journey to 1001 Rogers Street and met with SSS Advisor Tina McNeil. While on a tour and passing through St. Clair Hall, he walked by a professor who had recalled seeing him on an initial campus visit four years prior. She inquired on his potential decision of joining Columbia College and most importantly, called Jared by name. The eye-opening conversation was the sign Reichel needed and he quickly knew that this was the place to be.

As a 29-year-old freshman on campus, Reichel began his college tenure somewhat quietly and under the radar. Following his first semester, he accepted challenges from his professors and vowed to become more active on campus and make a lasting impact. Reichel later joined the TRiO SSS program and ultimately became the president of the organization. Additionally, during his junior and senior years at Columbia College, he served as the president of the Student Government Association.

In 2012, Reichel rejoined the workforce with Veterans United as a Customer Service Representative. Behind guidance and mentorship from the college’s TRiO staff, Reichel and two co-workers at Veterans United founded their own charitable organization, Home Runs for Heroes. Proceeds from the annual softball tournament, which to date has raised over $250,000, has benefitted the Central Missouri Honor Flight, which aids World War II, Vietnam and Korean War veterans in their return to Washington D.C., to visit their respective memorials.

In 2016, Reichel received the Columbia College Alumni Association’s Community Service Award for his efforts with Home Runs for Heroes.

“The care, compassion and guidance the staff at the Columbia College SSS offers every day is exceptional,” Reichel exclaimed. “I can stand in front of you today and honestly state that I don’t believe I would have graduated without the TRiO program. The staff at the Columbia House wouldn’t let me quit and they’d push me even harder. The one thing I will take with me for the rest of my life was the lifestyle of servant leadership. Not only does SSS teach this and promote it, but they help you find a way to live it.”

To this day, Reichel continues his relentless efforts in enhancing the lives of individuals in the local community and beyond. Whether it’s high-level projects through Veterans United or behind the scenes opportunities at institutions like Columbia College, Reichel never misses a chance to improve the well-being of others.

“Jared still enjoys making connections and supporting others in achieving their goals,” Coke said. “His generosity and commitment are abundant and unending. He gives back, helps others to grow, brings people together and is always of service to others. Jared’s level of determination in all that he undertakes is a rarity in life. He always strives for improvement and cares for those around him and actively works to make this world a better place.”