Cougar Athletics perseveres through pandemic to post another stellar year 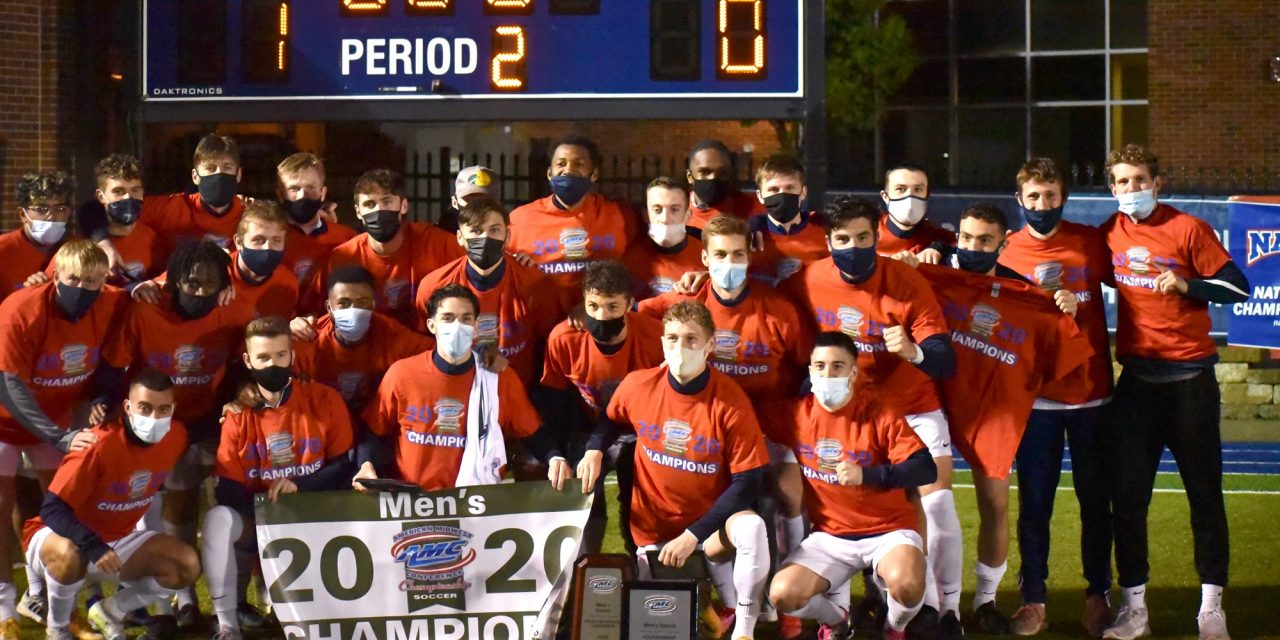 As the final minutes of the first half wound down at R. Marvin Owens Stadium on April 24, Carson Lindsey collected a pass from Erik Rajoy, made a move to evade a defender, and rifled the ball into the back of the net.

Lindsey’s goal was the only tally in a 1-0 win over Northwestern Ohio, and moved the Cougar men’s soccer team to the NAIA National Championship Tournament outside of Augusta, Georgia, where they finished among the top four teams in the country. It was the final athletic contest on Main Campus this academic year, and was a fitting capper to a challenging year for everyone involved in Cougar Athletics.

The teamwork required for John Klein’s squad to advance this far was also an apt metaphor for them, as well as the other Cougar teams, to even have the opportunity to compete during the 2020-21 school year, let alone thrive.

As the pandemic shut down life as everyone knew it in March of 2020, college administrators scrambled to transition classes to virtual learning, which led to ripple effects across all areas of the college. It forced the cancellation of all 2019-20 winter and spring sport seasons, which made for many tough moments.

“We didn’t have a lot of time to think about it, we had to act,” said James Arnold, who has served as the college’s director of Athletics for two years. “We immediately went from X’s and O’s to crisis managers and tutors and logistical masterminds.”

Instead of poring over film and practice plans, coaches and staff focused on the emotional and mental status of their players, as well as their academic performance in a Zoom world.

Those challenges extended into this school year, but they were mitigated by what Arnold called tremendous buy-in from everyone associated with Cougar Athletics. “The relationships that exist now between all these stakeholders – be it Student Affairs, Student Health, Plant and Facilities Operations or Financial Aid – that have worked together through this process will only make CC stronger in the coming years. It wasn’t always pretty, but that’s the real success story. We’re going to be a better college for years to come because of attacking these concerns as a team.

“Why are we better on the soccer field? Because everyone was on the same page,” Arnold concludes.

Dave Roberts, Columbia College Dean for Student Affairs, concurs. “One of the things people don’t understand, we don’t press the ‘easy button.’ All this work has come at the cost of a lot of heartache and experience, but we can look back and say we did our best.”

A small group of individuals was involved in the initial discussion regarding pandemic operations, yet that group quickly realized they needed to foster robust and frequent communication among different departments. “I used to joke that we were not only taking off to unknown places, but we were building the runway while we were taking off,” Roberts said. “It got to the point where we were working 24/7, and that meant that if we had to text each other, we did that.”

The results were not just a full Cougar Athletics calendar – even if most of the teams competed outside of their traditional competitive seasons – but, true to its history, a dominant one.

For the fourth straight year, Columbia College won the American Midwest Conference Presidents’ Cup, which is awarded to the school with the best performance among all sports the league sponsors. Since 2015-16 – when the college reinstated baseball, and added men’s and women’s indoor and outdoor track and field – the Cougars have become the elite institution of the AMC.

Five different teams swept both the regular-season and conference tournament titles, and another three sports who only had a postseason conference championship earned that trophy.

The men’s lacrosse squad was one of five that made such a sweep, winning the Kansas Collegiate Athletic Conference regular-season and tournament titles after finishing their schedule undefeated for the first time ever. Ian Wolfe’s squad also qualified for the NAIA National Lacrosse Invitational for the first time in program history.

See below for a full list of accolades from this past season.