Miss Congeniality: Alumna surprised with gift of a lifetime 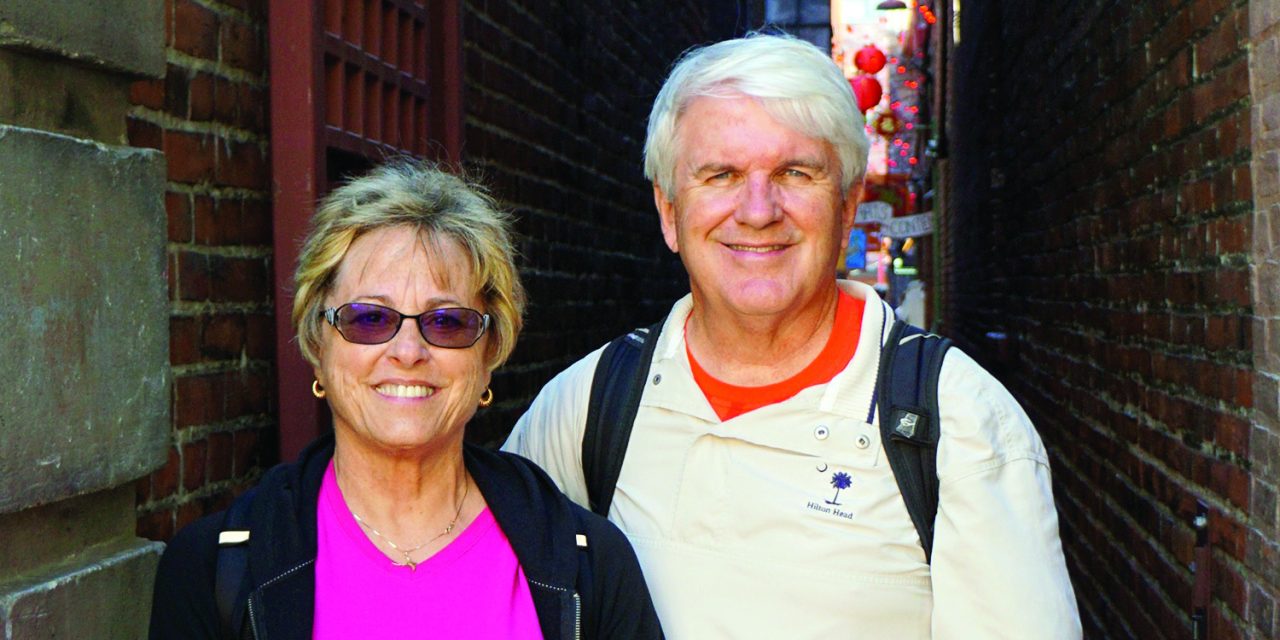 Diane Herman Hill ’70 had spent the day in Columbia with her husband, Greg, their two daughters and four of their six grandkids when Greg said he had something to show her. Her first reaction was, “Oh geez, what is he doing?,” and much to Diane’s surprise, Greg pulled into a parking lot at Columbia College.

Diane began her college career at Christian College, a popular choice among her hometown female classmates at Hickman High School located just down the street. As the women started their second year in 1969, the institution also planned a significant transition. Diane’s class was the last group of all-female students before the college was renamed Columbia College the following year and admitted men for the first time in the school’s 120-year history.

Flash forward to the fall of 2020, and she wasn’t sure why her husband had decided to stop by her alma mater. Known in the family for his crazy ideas, Greg almost let her walk past the benches outside New Hall before directing her gaze downward. It was then Diane saw her gift — three engraved bricks to commemorate her time at Christian College and her unexpected reign as Miss Columbia College 1970.

“I was awfully young then,” Diane says with a laugh. She entered the pageant for something fun to do, and remembers wearing an evening gown and being interviewed by judges. Diane was honored to be selected as Miss Columbia College, but the college’s pageant left out one key detail — a talent portion.

Diane recalls she didn’t have a talent for the statewide Miss Missouri pageant. “When I got there, some of the girls were extremely serious and I realized I was totally out of my league. A group of us formed the ‘F Troop’ – we were there for food, fun and friends! I don’t think I was ever in serious contention, but I had a lot of fun.”

While Diane claims to not be the “beauty pageant type,” her positivity captured the spirit of the contest with her fellow contestants, who voted her Miss Congeniality.

The recognition doesn’t surprise Greg in the slightest. The couple met in high school when Greg, a junior, set his sights on a certain senior. “I got the courage to ask out the prettiest girl in the school and held on to her,” he says.

The couple has been together for more than 50 years. After completing her associate degree, Diane joined Greg at the University of Missouri. She continued her studies in elementary education, while Greg had made a name for himself on the Mizzou football team. They’ve built their family here in Columbia, raising their two daughters and both enjoying rewarding careers. Diane is a retired school teacher and Greg is an insurance agent with State Farm.

After all these years, it shouldn’t be a surprise that Greg still has a few tricks up his sleeve.

“It meant so much that Greg surprised me that it was a little overwhelming,” Diane says. “He’s a bit modest when he says he had ‘a little success at Mizzou,’ and I’ve always been happy to be his support system for all of his success and notoriety. He has pictures and stones and awards and accolades [on Mizzou’s campus], and it really touched me that he took this special time in my life and magnified it.”

Diane may not have claimed the title of Miss Missouri in 1970, but it’s clear she won Greg’s heart.

Leave your mark on campus

Engraved bricks are situated around main campus, including the pathway to Alumni Fountain on the Quad, in the Christian College Garden, in front of the Gerald T. and Bonnie M. Brouder Science Center, and most recently, along the west side of New Hall, home of the Robert W. Plaster School of Business. Additional naming opportunities are also available for benches, classrooms or even a building. For more information, contact Mitch Gosney ’13 at magosney1@ccis.edu or (573) 875-7492.